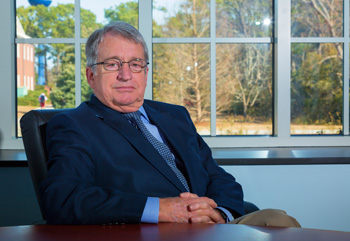 William "Woody" Hall, senior economist at University of North Carolina Wilmington, predicts the Wilmington area will grow by 3.5 percent this year and 3.8 percent in 2016. (Photo by Chris Brehmer)
When it comes to predicting how well the Wilmington area’s economy will fare in the future, 3 percent is a key figure, a longtime UNCW economist said as he explained his latest forecast.

“The economy’s got to grow about 3 percent per year to keep the unemployment rate stable,”
said William “Woody” Hall, senior economist at the University of North Carolina Wilmington who plans to retire this spring after nearly 41 years at the school.

Economists use employment and production as main conceptual measures in the study of economic activity. Basing his forecast on gross domestic product, Hall estimates that the Wilmington Metropolitan Statistical Area, which includes New Hanover and Pender counties, will grow by 3.5 percent this year, 3.8 percent in 2016. The GDP measures total output – “everything across the board,” Hall said – including retail sales, home sales, sales of medical services and anything else sold to a household or individual.

With the exception of airport passenger traffic, local economic indicators Hall studied as he created his 2015 forecast – unemployment, residential real estate, retail sales, tourism and State Port activity – showed signs that the sectors have fully recovered or are on their way back from the Great Recession that crippled the economy about seven years ago.

Retail sales and the tourism industry have rebounded completely from what was considered one of the worst economic downturns since The Great Depression.

“The recession had a smaller impact than we thought it would in terms of overall economic growth,” Hall said. “We actually grew more than we thought we would grow.”
But Hall said he would much rather err on the side of underestimating growth than painting too
rosy a picture.

In an economic outlook for 2015 that was released in December, Wells Fargo analysts said, “North Carolina’s recovery continues to gradually build momentum.”

But growth has not been evenly distributed across the state, the report pointed out, singling Wilmington out as an area of interest.

“The bulk of economic gains have been concentrated in the state’s larger urban areas, specifically Raleigh and Charlotte,” stated the Wells Fargo special commentary, compiled by senior economist Mark Vitner, economist Michael Wolf and economic analyst Alex Moehring. “There are a few other bright spots around the state, including Asheville, Wilmington and Durham. Most other areas have faced a tougher road, however, and many have only recently begun to post consistent job gains.”
While a number of factors, such as the fallout from the loss of state film tax credits, the possibility of interest rate changes and whether consumers retain a higher level of confidence, could affect growth locally this year, business leaders say the pieces seem to be in place for the economic gains of 2014 to continue.

NUMBERS: The growth rate for the number of travelers departing from and arriving at Wilmington International Airport declined 3 percent from 2013, according to airport statistics for the year ending in November. Meanwhile, container tonnage growth at the Port of Wilmington was up 5 percent in 2014, continuing 2013’s upward trend after a decline in 2012.

EXPLAINING THE NUMBERS: “The reason we look at container tonnage through the State Port and passenger traffic at the airport is that we’re looking for a substitute measure for linkages to the rest of the world,” Hall said, adding that one theory suggests an area grows based on its international connections. Airlines pulled some flights from airports nationwide last year, including ILM, said Jim Morton, the airport’s finance director. As for the Port of Wilmington, officials there said recently that they attribute the port’s success, despite its relatively small size, in part to an emphasis on customer service.

LOOKING TO THE FUTURE: “We continue to request and go after additional service with the airlines, whether it’s increasing the size of the aircraft or new destinations or just adding frequency to current destinations,” Morton said. American Airlines will add back a flight to LaGuardia from ILM in February while Delta will do the same in March with a flight to Atlanta. In partnership with the Wilmington and Beaches CVB, the airport in February is launching promotional efforts to attract more travelers from Atlanta. At the Port of Wilmington, new wood pellet and cold storage facilities are expected to increase the port’s volume.

NUMBERS: Retail sales grew by 11 percent in New Hanover County last year, Hall said. “This sector is back to where it was prior to the onset of the recession,” he said. Recent national news about a decrease in overall U.S. retail sales in December was less encouraging. Nationwide, sellers of electronics, clothing and cars and department stores posted the largest declines in the last days of 2014, according to a U.S. Department of Commerce report released this month.

EXPLAINING THE NUMBERS: Businesses moved and expanded into the Wilmington area in 2014 at such a rapid pace that commercial brokers reported a decline in available retail and office space. Also, retail sales and tourism are closely linked, Hall said. “Tourism was one of the earliest sectors to rebound,” said Connie Nelson, spokeswoman for Wilmington and Beaches Convention & Visitors Bureau.

LOOKING TO THE FUTURE: While some financial analysts predict additional store closings for national chains such as Sears and JC Penney, a Wells Fargo economic outlook for North Carolina said, “The state remains a magnet for relocations and expansions and is also attracting more out-of-state residents, which speaks to the rising potential for spillover effects into industries that rely on population growth, like construction, retail trade and personal services.”

THE NUMBERS: 5 percent for New Hanover County; 5.4 percent for the Cape Fear region in November, the latest numbers available. The county’s rate peaked at about 10.7 in Feb. 2010. On the national level, rates between 5 and 5.5 percent are considered full employment.

EXPLAINING THE NUMBERS: Part-time jobs are lumped in with full-time jobs in government surveys used to calculate unemployment rates, said Hall. Some, though not all, of the employment gains have come in sectors associated with low-skill occupations, and low-skill tends to be associated with lower wages, Hall said. Also, rates don’t shed light on how long some people looked for jobs before they gave up, the economist explained. “We’ve got some discouraged workers,” he said.

LOOKING TO THE FUTURE: History has shown that in a growing economy, part-time employment starts to increase first, but a lot of part-time jobs can become permanent jobs, Hall said.
“An increase in part-time employment is not necessarily a bad thing if history repeats itself,” he added. Also, “Some of those discouraged workers, when they see their neighbors getting jobs, may convert back to looking for jobs,” he said. Total employment is finally growing, Hall said, at the rate it was following the 1990-91 recession.

NUMBERS: The growth rate for the tourism industry in New Hanover County last year was 10.2 percent, Hall said, compared to 3.3 percent in 2012. The rate is based on room occupancy tax collections reported by the N.C. Department of Revenue.

EXPLAINING THE NUMBERS: “People tend to look at travel as a right and something they’re going to do even in tough economic times,” Nelson said. “One of the trends we’ve seen in recent years that has actually continued is that people are a little more focused now
on finding specials and packages. If they have to spend more in one category [such as lodging or food] they might try to find a way to spend a little bit less in another category.”

LOOKING TO THE FUTURE: A new hotel, SpringHill Suites by Marriott in the Renaissance Park office development on Military Cutoff Road, is expected to open this spring, Nelson said. “That gives us a new product in the hotel category, and then there are others that are proposed that have not broken ground yet,” she said. Another factor in future growth is expected to be the sports market, particularly youth sports, Nelson said. “We’re well-positioned to tap into that market with the addition of sports facilities in recent years.” At least five sports events new to the area chose New Hanover County as the location for competitions this year, Nelson added.

On the downside, businesses expect the loss of state film tax credits to have some kind of effect on tourism dollars. “Although we can’t assign a dollar amount to how much film impacts tourism,” she said, “we do know from our travel partners, from our hoteliers, that there is some concern it will impact tourism revenues, especially from the hotels’ standpoint.”

THE NUMBERS: Using numbers of homes sold from the Wilmington Regional Association of Realtors, Hall said home sales increased by 141 percent from a low point around 2009 to the third quarter of 2014, with an increase last year of about 63 percent since a peak in 2005.
Meanwhile, sale prices have increased by 18 percent since the low point in the WRAR numbers.
EXPLAINING THE NUMBERS: The activity of 2005 “felt like a feeding frenzy,” said Sherri Pickard, president of the Wilmington Regional Association of Realtors and managing broker for residential real estate firm Coldwell Banker Sea Coast Advantage. “I think what we’re seeing now is a much more normal market, a traditional market, that makes sense.”

LOOKING TO THE FUTURE: Pickard said higher interest rates and less access to borrowing, along with any changes in what seems to be higher consumer confidence for the time being, could affect home sales and prices locally, but “we feel like we’re going to continue to see improvement.” In a report on national statistics, National Association of Realtors chief economist Lawrence Yun cautioned, “Housing costs – both rents and home prices – continue to outpace wages and are burdensome for potential buyers trying to save for a downpayment while looking for available homes in their price range.”