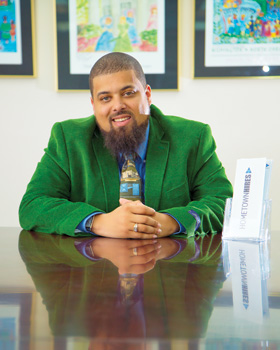 Jamir Jumoke, Hometown Hires program manager, runs a project established this year to help address local poverty and crime rates through employment placement. (photo by Chris Brehmer)
Vertex Rail Technologies’ announcement last month that its new rail tanker manufacturing plant will bring about 1,300 jobs to Wilmington did more than draw a crowd of job seekers to a career fair the next day; it also thrust a local hiring initiative into the spotlight.

Hometown Hires, a public-private partnership within United Way of the Cape Fear Area had been operating quietly for most of 2014. Then Don Croteau, CEO of Vertex Rail, announced he would work with the program as part of his commitment to fill 10 percent of those jobs with people from disadvantaged backgrounds.

“It’s the right thing to do,” Croteau said in a later interview. “We need so many people. Why not open up our criteria to a wider audience?”

Essentially, Hometown Hires will serve as Vertex’s “supplemental human resources department,” as Croteau puts it, for that 10 percent of the workforce. Drawing from a pool of applicants who have some obstacles to employment, the program will screen, prepare and identify potential employees for Vertex, as it has been doing for other employers in past months.

“We vet and get the best of the best, people who want to work and help themselves,” said Jamir Jumoke, Hometown Hires program manager. “Then we get them job ready. The expectations of them [from an employer] are the same expectations as for other employees. They have to take it seriously, and they need to give back to their community. If [the job] doesn’t work out for them, it’s not because we and the employer didn’t do everything we could.”

Born of local leaders’ understanding that economic opportunity is a critical element in combating gang violence and addressing the ills that accompany poverty, Hometown Hires began taking shape in early 2014. At a December 2013 Greater Wilmington Business Journal Power Breakfast, New Hanover County district attorney Ben David gave an impassioned talk on the need for the business community to step forward with job opportunities for people with barriers to employment.

Soon after, David and Chip Mahan, CEO and chairman of Live Oak Bank, began to develop a hiring initiative that would provide that opportunity for local people who needed a “hand up, not a hand out,” as David says.

Hometown Hires, working with existing agencies, would identify and prepare those people to help them land a job, matching them with employers who were willing to hire at least one person from outside their normal parameters.

“It gets back to one challenge: hope,” Mahan said. “We have an ecosystem; they have nothing. Something has to break that cycle and give these guys some hope. ‘Please give these guys a shot’ – that’s what Ben and I have been saying.”

Gradually, quietly, some of the CEOs in a core group of 50 that Mahan assembled have been doing just that.

John Monteith, owner of Monteith Construction Corp., has hired two men who came through the Hometown Hires program, and they have been with him for nine months – “long enough that we are excited,” he said.

“They are working on two different projects for us ... one of which is the renovation of old Topsail High School into Pender County administrative offices,” Monteith said. “They are doing everything from labor to supervising laborers on site as the site foreman. It’s a role they have to grow into, but we put them in a position and gave them an opportunity to demonstrate their skills and work ethic. It is working out very well.”

One reason for his new employees’ experience, Monteith said, is that United Way, through Hometown Hires, has been “very deliberate” in preparing job candidates and making sure each is a good fit for an available position and can be successful.
Like Croteau, Monteith regards Hometown Hires as almost a complementary HR service.

“They provide training, background checks and mentoring, compensating for the challenges and obstacles [the new employee] has had,” he said.

Monteith, who plans to hire additional workers through the program, admitted that employing a Hometown Hires participant “could sound risky” to a company owner.
“But when you’re involved with it, you realize it’s not,” he said. “Hometown Hires has vetted them pretty thoroughly and matched them up with what they really want to do. They’re not just filling jobs.”

The program’s reach doesn’t end when graduates clock in to their new job, Jumoke said.

Mentoring is ongoing, designed to help them be effective employees, adapting to the culture of their new workplace, becoming part of a team and growing into new opportunities.

An important resource – both for Vertex and for Hometown Hires participants – is Cape Fear Community College, whose officials have been in discussions with Croteau from the beginning about the college’s training capabilities.

“Vertex is trying to capitalize on an opportunity in the industry, and it’s moving at a very fast pace,” said Amanda Lee, CFCC’s vice president for instructional services.
She said that Croteau approached the college early on in talks to assess its ability to provide customized training for new Vertex employees.

“Our position is that we’ll do whatever the company wants in the way of training,” she said.

“It doesn’t matter what they need; we have the resources to find people to teach the skills,” said Melissa Singler, CFCC’s interim dean of continuing education. “There are things every company needs, such as safety training and OSHA training. But companies, depending on what they are producing, may also need very specialized training.”

Not only will CFCC design and provide training for Vertex’s new workforce, the college can work with interested applicants ahead of time to make them more attractive to this or other companies.

It was a conversation with Lee, as Croteau was scouting training opportunities in Wilmington, that made him aware of Hometown Hires and led to a meeting with Jumoke.

The two men have much in common: both grew up poor in single-parent homes and know firsthand the difficulties of breaking out of poverty.

In Wilmington recently, Croteau was introduced to the program’s current participants.

“These are people who just want a chance to work,” the CEO said. “We’re giving them the chance; they need to take it. When they walk through our door, they need to become Vertex people. We hope that, over time, [hiring the disadvantaged] will become a regular part of what we do.”