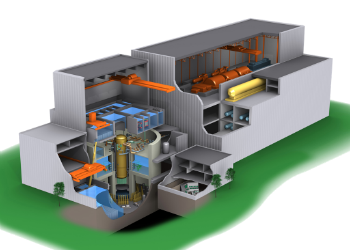 In a communication Tuesday, the Nuclear Regulatory Commission (NRC) notified Wilmington-based GE Hitachi that it has certified GEH’s Economic Simplified Boiling-Water Reactor (ESBWR) design for use in the United States. NRC certification means that the reactor design meets the agency’s applicable safety requirements, according to the release.

ESBWR uses “advanced, true passive safety systems and a simplified design utilizing natural [water] circulation. These attributes result in the ability of the reactor to cool itself for more than seven days without operator intervention or AC power on or off site,” the release stated, adding, “Based on core damage frequency, the industry standard measure of safety, the ESBWR is the world’s safest approved nuclear reactor design.”

“Achieving design certification means the ESBWR, the world’s safest reactor, can now become a reality,” Caroline Reda, president and CEO of GEH, said in the release. “Design certification will not only benefit our U.S. customers; it marks a crucial step forward for the ESBWR’s commercial advancement globally.”

The ruling comes nine years after GEH first applied for ESBWR certification, according to information in the NRC’s ruling.

After a draft certification, issued several years ago, indicated a favorable outcome from the NRC, GEH and several energy companies have explored possible partnerships to build ESBWRs.

Two of those proposed partnerships involving ESBWRs are waiting for a license from the NRC, the release stated. One, with Detroit Edison (DTE Energy) in Monroe, Michigan, is for a proposed nuclear power plant, with an NRC license expected in 2015. The second is with Dominion Virginia Power, for a possible nuclear power plant at Dominion’s North Anna Power Station northwest of Richmond. That license is expected in 2016.

"We congratulate GE Hitachi on the attainment of design approval for its ESBWR," Ron May, DTE Energy's executive vice president of major enterprise projects, said in the news release. "This is an important milestone for both GE Hitachi and for us as we near the final stages of obtaining a combined license from the NRC, for a potential ESBWR unit at our Fermi site in Michigan."

NRC certification also opens the door for the ESBWR to be built in other locations around the globe, the release stated. Projects under consideration or in the planning stages include ones in India, Finland, Poland, Saudi Arabia, Sweden and Vietnam.

“The ESBWR’s technology represents the culmination of more than 55 years of experience designing, building and servicing advanced reactors globally,” the release stated. “In addition to its best-in-class safety, the ESBWR includes a modular design for ease of construction, increased fuel efficiency and the lowest projected operating, maintenance and staffing costs per megawatt hour in the industry.”