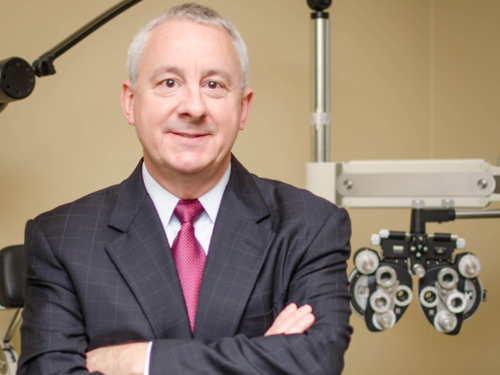 Optometrist Edward Paul is the inventor of the patented TOZAL Comprehensive Eye Health Formula, a prescription eye vitamin for the prevention and treatment of macular degeneration.

It is a nutritional supplement that improves vision in patients with macular degeneration and relieves dry eye symptoms. Total sales figures went from zero in 2011 to $1.4 million in 2012 and $1.9 million in 2013.

Paul also owns and operates Landfall Eye Associates, an optometry and low-vision specialty practice, which is a separate business entity than the one he founded for the TOZAL.

Last year, he was responsible for making Wilmington the first and only location in the state where patients can receive CentraSight, a new treatment program using a tiny telescope implanted inside the eye to improve vision for patients with end-stage, advanced macular degeneration.

Paul holds multiple U.S. and foreign patents on pharmaceutical agents and medical devices used in the treatment of eye diseases and systemic disorders. He is an experienced clinician, researcher and educator and serves as a visiting professor at St. Luke’s University’s medical school.

A graduate of Southern College of Optometry in Memphis, Tennessee, where he received a doctor of optometry degree, Paul also holds a second doctorate – a doctor of philosophy degree in nutrition.

He said he plans to build his business on “two parallel paths.”

The first involves developing the low-vision specialty area of his optometry practice regionally to meet the need for those services throughout the Carolinas. He currently practices one week out of each month in his Raleigh and Charlotte offices and would like also to expand his reach into South Carolina.

Secondly, Paul is focused on the continued creation and marketing nationally and internationally of nutritional supplements such as TOZAL.

Two new products pioneered by Paul will launch this year, and nine others are in the research and development pipeline.

The new products are nurtaceuticals for diabetic retinopathy and retinitis pigmentosa. Both are expected to become commercially available in the third quarter of this year.

Wilmington “has evolved as a center of innovation for health care in the Carolinas,” Paul said.

“Leading physicians and practitioners are attracted here for its quality of life, and residents and medical colleagues alike benefit from the collective health care talent available in a market our size.”