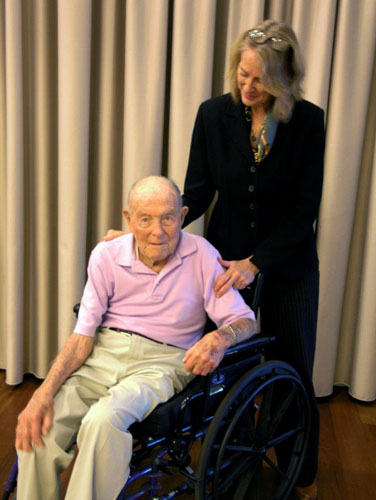 Bruce Cameron with Cameron Art Museum director Anne Brennan in October 2012. Cameron, who was a museum benefactor, Wilmington philanthropist and well-known developer died Wednesday at the age of 95. FILE PHOTO

Members of the area business community on Thursday remembered Bruce Cameron, one of the city's best-known developers and a distinguished philanthropist.

He died Wednesday at the age of 95.

“Mr. Bruce, as he was fondly called, left a generous legacy of philanthropic giving that has impacted both the region and the state,” Anne Brennan, executive director of Wilmington’s Cameron Art Museum, said in an email. “Since Wilmington's establishment over 270 years ago, Bruce Cameron still stands as one of our city's most generous cultural philanthropists.”

Jim Wallace, owner of Intracoastal Realty, emphasized the fact that Cameron and his brother Dan advanced visionary development concepts that have distinguished the Wilmington area.

The duo purchased Figure Eight Island in the 1950s against the advice of many builders in the area at that time. More than 50 years later, it’s one of the most sought-after pieces of residential realty on the East Coast.

“Bruce and Dan Cameron and the entire Cameron family have done great things in this community. They are irreplaceable,” Wallace said. “Their vision for Figure Eight Island created a place that is known all over the U.S. as a really unique development for that time, with its private bridge. It was done well. The fact that they did not allow commercial development on the island meant that it is unspoiled and pristine.”

Often reporting to work and interacting with staff members at the family's brokerage firm off Glen Meade Road, Cameron had a knack for telling stories about Wilmington’s past and making sure his staff was well versed on the region.

Scott Sullivan, a partner with Wilmington-based Cameron Management Inc. and Cameron's son-in-law, said Cameron was instrumental in bringing a number of projects to the city by selling large tracts of land left to the family. Those projects include RiverLights, a master planned community along the Cape Fear River that was recently annexed into Wilmington; the Marsh Oaks and Bayshores developments in Ogden; and the Verizon Call Center on Shipyard Boulevard.

"He was an awesome mentor and a very wise man," Sullivan said. "He loved land, particularly large tracts of land. When he made up his mind, that was it."

Recalling his job interview, Rogers said, Cameron could be quite intimidating, but as a family man, he was always concerned about his employees.

"I knew that I was sitting in a room with a living legend," Rogers recalled. "He was a visionary and always treated me with a great deal of respect."

Raiford Trask III was cousins with Cameron. He said his leadership and vision for the area would be missed.

“Mr. Bruce was always a larger-than-life figure to me,” said Trask, whose father was Cameron’s first cousin. “My father took me to [Bruce Cameron's] hunting camp and property in Hyde County when I was 11, and I shot my first deer on that trip,” he said. “Those were my take-aways as a young boy, but, as I grew older, I recognized that there was probably more to Hyde County than deer hunting when I met the chairman of Nations Bank there.”

Trask said he learned a lot from his older cousin, whether it was in the boardroom or back woods.

“I went to [Cameron] for business advice fairly often, but the piece of advice that I remember most he gave me when I was struggling as the chair of a fundraising committee for the renovation of one of Wilmington's signature landmarks,” he said. “The fundraiser was not going well, and I was frustrated. He told me, 'You may not always get the value of your time out of your business, but I have always done better than the value of my time when I work for my community.' "

And work for his community Cameron did.

He served on the board of New Hanover Regional Medical Center, and, along with his family, gave the land for the hospital’s Urgent Care Center. NHRMC named its Cameron Health Education Center for the family.

“Our thoughts and prayers are with Mr. Cameron's loved ones during this time of loss. The Cameron family has made so many important contributions to this community and to New Hanover Regional Medical Center,” NHRMC president and CEO Jack Barto said  in an email Thursday. “We know this is a difficult time, and our prayers are with them as they celebrate his life.”

Bruce and Dan Cameron were major supporters of the University of North Carolina Wilmington. The Cameron School of Business and its primary facility, Cameron Hall, were named for them.

“Bruce and Dan Cameron were outstanding individuals who happened to be great businessmen,” said Larry Clark, dean of the UNCW Cameron School of Business. “We never have to fear the Enron problem of taking down our name. We greatly value their name and what it stands for. It motivates and drives us to be the very best business school we can be.”

Cameron also left a lasting legacy at Cape Fear Academy, having served as the school’s founding trustee and chairman of the board from 1968 to 1975. In 1972, the Bruce B. Cameron Jr. Gymnasium was built and named in his honor, and he was named CFA's first Honorary Alumnus in 1998 in recognition of his long service to the school. His generosity also made possible the Upper School’s Rachel Trask Cameron Hall, which was dedicated in memory of his mother in 2000.

“The Cape Fear Academy community mourns the loss of one of our founding fathers and lifelong supporters, Mr. Bruce Cameron Jr.,”  Susan Harrell, the school’s development director, said in an email. “We owe a tremendous debt of gratitude to his visionary leadership 45 years ago as he saw the benefit to having an independent school for our region.”

Another community resource that has benefited from Cameron’s generous support is the Cameron Art Museum.

In 2002, Brennan said, with a gift of land and seed money, he helped launch the Louise Wells Cameron Art Museum, re-establishing St. John’s Museum of Art in a larger, state-of-the-art facility. The new museum provided more space for public programming as well as expanded exhibition space, a secure vault for the permanent collection, a 9.2 acre nature park and an historic Civil War site.

“The museum family of trustees, volunteers, members and staff are mourning the passing of a great man,” Brennan said. “It is through his love for his wife, Louise Wells Cameron, that he worked diligently toward the realization of the Cameron Art Museum in her honor. Anyone who passes through these doors can feel the strength of this tribute and its profound inspiration to the community. Mr. Bruce, through the Cameron Art Museum, changed the cultural expectation for eastern North Carolina. He will be missed.”

A family member said that a service for Cameron is planned for Saturday. Andrews Mortuary is handling arrangements, but details were not immediately available Thursday afternoon.