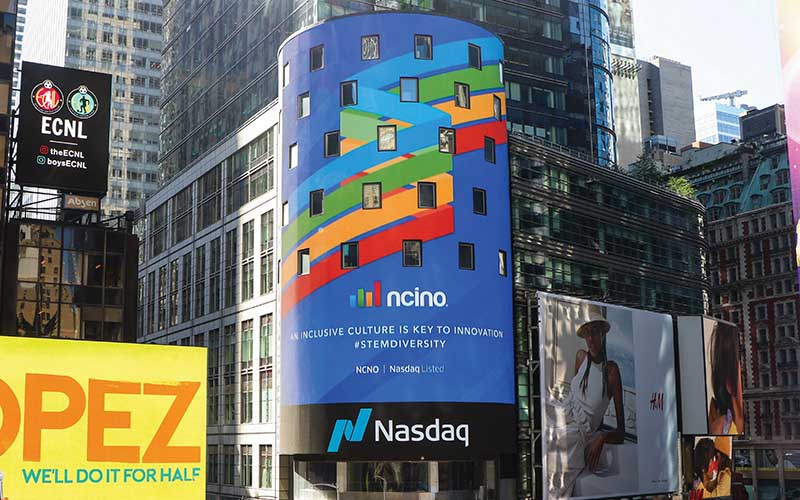 Wilmington-based banking software firm nCino debuted on the Nasdaq this year.
The region’s short list of publicly traded companies grew in 2020 with the additions of PPD Inc. (Nasdaq: PPD), a global contract research firm, and nCino (Nasdaq: NCNO), a financial technology company, to the market.

Before the year started, Wilmington-based Live Oak Bancshares was the only public firm in the region. It started trading as LOB on the Nasdaq in 2015.

The move marked the firm’s return to the public market. PPD became a private company in 2011.

David Simmons, PPD’s chairman and CEO, said this year that the IPO helped position PPD “to continue to invest in innovation and differentiating services, from a strong financial foundation, to help our customers provide life-changing therapies and pursue our mission to improve health.”

PPD this year has also been a player in the development of COVID-19 vaccines and treatments.

The firm had strong results for its year-to-date revenue in its third-quarter earnings report. For the nine months ending in September, revenue increased 11% to $3.3 billion, compared to the $3 billion for the nine-month period in 2019.

Shares of nCino, a spin-off of Live Oak Bank, soared when the firm debuted on the Nasdaq in July, offering 8 million shares. Its IPO valued the company at the time at roughly $7 billion.

nCino, with more than 900 employees, has maintained rapid growth this year despite the COVID-19 pandemic. The firm, along with Live Oak Bank, also played a role in the SBA’s $525 billion Paycheck Protection Program this year.

nCino in its third-quarter financials reported total revenues of $54.2 million, a 43% increase from $37.9 million in the third quarter of the previous fiscal year. Live Oak reported its 2020 third-quarter net income at $33.8 million.

Pierre Naudé, nCino’s CEO, said one of the reasons the company went public was to “get more notoriety, as well as the visibility for people in other countries to see the real nCino, and get insight into the financials, the background of the company, the description of the company, etc.”

“Because if you can imagine, if you go into Europe with a brand new company and a brand that is not known, then how do they know that the company will be around one, two, three years from now?” he said in September. “And we believe that the IPO has given us that gravitas and that notoriety.”