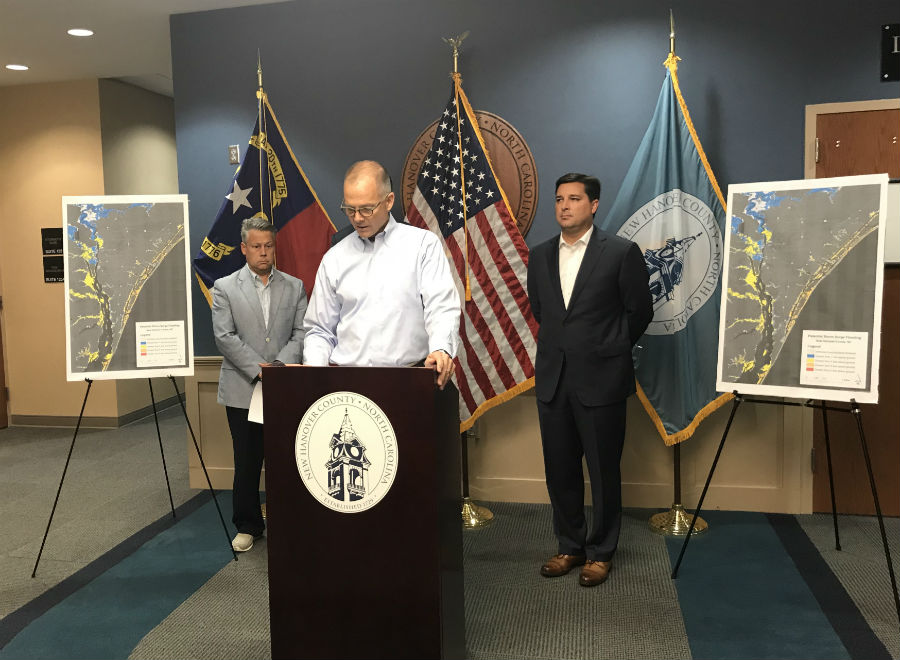 Woody White, chairman of the New Hanover County Board of Commissioners, makes a statement during a Hurricane Florence news conference Tuesday afternoon. (Photo by Cece Nunn)
Anticipation mounted Tuesday as Hurricane Florence loomed in the Atlantic Ocean on a path of anticipated destruction toward Southeastern North Carolina.

Businesses, hospitals and government officials in the Wilmington area continued preparation efforts while keeping an eye on the latest movements of the storm. Hurricane Florence was a Category 4 hurricane as of 2 p.m. with 130 mph winds, according to the National Weather Service.

“We expect Florence to make landfall currently as projected in the Onslow County area southeast of Jacksonville 8 a.m. Friday morning as a Category 3 storm and major hurricane,” said Steven Still, New Hanover County’s emergency management director, during a news conference around 1 p.m. Tuesday. “We can expect the earliest arrival time of tropical storm force winds for our area to be 10 p.m. Wednesday evening.”

Still said that as of Tuesday’s projections, the storm had the potential to sit over the Cape Fear region for a period of 24 hours, with tropical storm force winds (39 to 73 mph) through Saturday.

“So it will be a duration of high winds during this time,” he said.

Major employers in the area were taking precautions Monday and Tuesday to get ahead of the storm, while most government offices announced closings throughout the area.

"We have detailed plans to prepare our site for weather emergencies including hurricanes. We are taking several steps including preparing facilities, planning for appropriate equipment shutdown and identifying critical personnel to remain on site to facilitate security and the restart of operations ... once the storm passes, we will evaluate when it is safe to resume operations," said Jon Allen, spokesman for GE Hitachi, in an email.

PPD spokesman Ned Glascock said in an email Monday, “PPD prepares in advance for emergencies by maintaining a site emergency action plan and a business continuity plan. When severe weather threatens, we convene our site emergency action team to evaluate the best available information about the threat, and we leverage multiple channels to communicate with our employees.

New Hanover Regional Medical Center announced Tuesday that the hospital will close all non-emergency entrances as of 7:30 p.m. Wednesday, according to a news release.

“The only exception will be for women in labor and their partners, who can go directly to the entrance of the NHRMC Betty H. Cameron Women’s and Children’s Hospital at any time,” officials said in the release.

Hospital officials, however, are advising that pregnant woman at 37 weeks or more evacuate, if possible, due to the difficulty of travel for patients and emergency officials at the height of the storm.

are Because of the severity of the storm, the physician leaders of our OB/GYN Department are recommending pregnant woman who have the means to leave evacuate the area – particularly pregnant women at 37 weeks and above.

NHRMC Health and Diagnostics locations and NHRMC Physician Group practices will be closed on Wednesday and remain closed through the week.

Pender Memorial Hospital in Burgaw, the NHRMC Orthopedic Hospital in Wilmington and NHRMC Emergency Department-North in Scotts Hill will close at noon Wednesday. The closure includes emergency departments at the sites, officials said.

“NHRMC will concentrate its personnel to care for patients, including emergency patients, at New Hanover Regional Medical Center’s 17th Street location in Wilmington, which is best built and equipped to handle a storm of this magnitude,” officials said in the release. “The facilities will be reopened as soon as we are able to do so after the storm.”

The Novant Health Brunswick Medical Center Emergency Department is scheduled to remain open during Hurricane Florence to serve urgent medical needs, according to a news release.

“Out of an abundance of caution, some patients at the medical center are being transferred to inland hospitals to continue to receive care until they are able to return home,” Novant officials said in the release.

All local Novant Health physician clinics, outpatient centers, imaging centers and medical record offices will be closed on Wednesday through the weekend.

“Novant Health team members will care for patients who come in during the storm and once the storm has passed,” Novant officials said.

Medical staff will be staying at the medical center during the storm. The hospital has stocked up on supplies of water, food, medications, linen and other items in preparation of the storm.

Damage assessment at physician clinics will take place after the storm and full services will be restored as soon as possible, officials said in the release.

Dosher Memorial Hospital spokesman James Goss said in an email Tuesday of the Southport facility, "Effective 5 p.m. on Tuesday, Sept. 11, Dosher inpatient and surgical services will close due to the hurricane. The Emergency Department remains open 24/7. All Dosher Medical Clinics will be closed Wednesday through Friday."

Also Tuesday, Gov. Roy Cooper ordered mandatory evacuations for all of North Carolina's barrier islands, including all Wilmington-area beaches. During the news conference Tuesday, New Hanover County officials urged residents to leave if they can, although no county-wide mandatory evacuation had been issued.

"This is not a time to be complacent. If you are under a mandatory evacuation, I encourage you to seek lodging outside the area. If you live in a low-lying area or if you will be impacted by storm surge, please be in a secure location by no later than 8 o'clock tomorrow night, Wednesday night," said Woody White, chairman of the New Hanover County Board of Commissioners.