Using The State's Brownfields Program As A Catalyst For Development 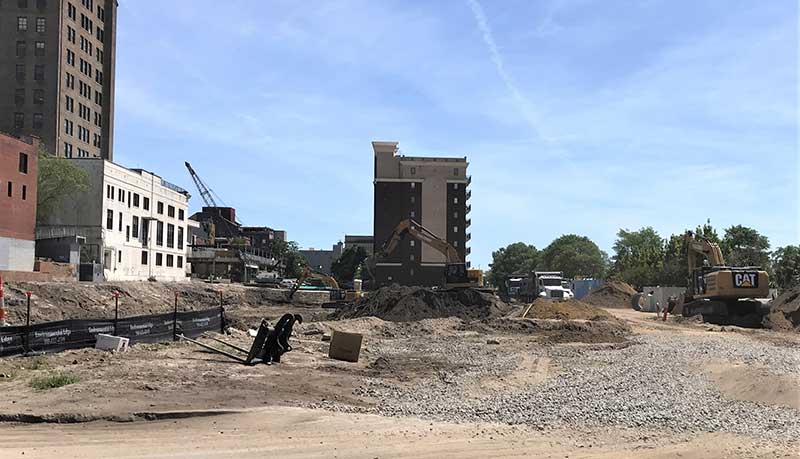 The program, administered by the Division of Waste Management under the N.C. Department of Environmental Quality, is a state effort to break the barrier to redevelopment of underused, contaminated property. The program defines a brownfield site as any real property that is abandoned, idled or underutilized where environmental contamination, or perceived contamination, hinders redevelopment.

“Because of contamination, either people won’t buy [a property] or can’t get financing for redevelopment. Anything like that is a hindrance. And so, what our program is really built to do, is deal with those hinderances,” said Sam Watson, a project manager in Wilmington.

The program helps developers, landowners and lenders by providing guidelines for safe development of brownfield sites to protect public health, he said.

“It’s been a really excellent piece of legislation that has served the state very well in the economic development sense,” Nicholson said. “The statute was really aimed at figuring out how to leverage developers into entities that can make sites safe for the reuse proposed by those developers.”

The program has completed more than 470 brownfield agreements, which represent at least $15 billion in committed private investment in those properties that might not have otherwise occurred, Nicholson said. Of that $15 billion, he said, a total of about $430 million represents the portion of that investment in Wilmington.

That includes projects such as the Pharmaceutical Product Development (PPD) global headquarters in  Wilmington, which is touted as a program success story.

“There's plenty of things in Wilmington for instance where we have a few brownfields that get redeveloped along the waterfront and all the sudden other properties sprout up around there because there is more of an economic engine development that's taking place,” Nicholson said. “That couldn't be clearer then with the PPD headquarters.”

The program has also aided development of the Port City Marina, the Wilmington Convention Center and Cape Fear Soccer Park. Even the ongoing River Place development has reached a brownfields agreement in its development.

“This is certainly one of those things that has a huge multiplier … That’s an economic driver for hotels and restaurants and tourism, beyond the actual value of that property,” Nicholson said.

Watson said properties entering the program have to go through a series of site assessments, which is done in phases, to evaluate areas of environmental concern. He and other project managers are currently working on several projects in Wilmington, dealing with prospective developers to find out what is needed for sites to be made safe for their proposed use.

Once site data is collected and risk assessment is conducted, a brownfields agreement can be reached.

Once the contract is written, the agreement is subject to a public comment period and is recorded; then site work begins, Watson said. Project managers facilitate cleanup efforts throughout the project.

There are also tax incentives available to developers who improve brownfield properties, Nicholson said. The tax incentive is on the value of the improvement to the property.

That improved value “is not fully taxed for a period of five years and it’s a sliding scale,” he said.

This allows a developer to offset costs of site assessments and cleanup efforts, which are contracted and paid for by the developer. The first year after completion of the improvements, the value is 90 percent excluded from taxes. Over the five-year period, he said, a developer pays roughly 55 percent of the normal property taxes they would have if they had not had a brownfields agreement.

“We are a tool in the toolbox that developers need to remember for those particularly difficult sites on a financing level,” Nicholson said.