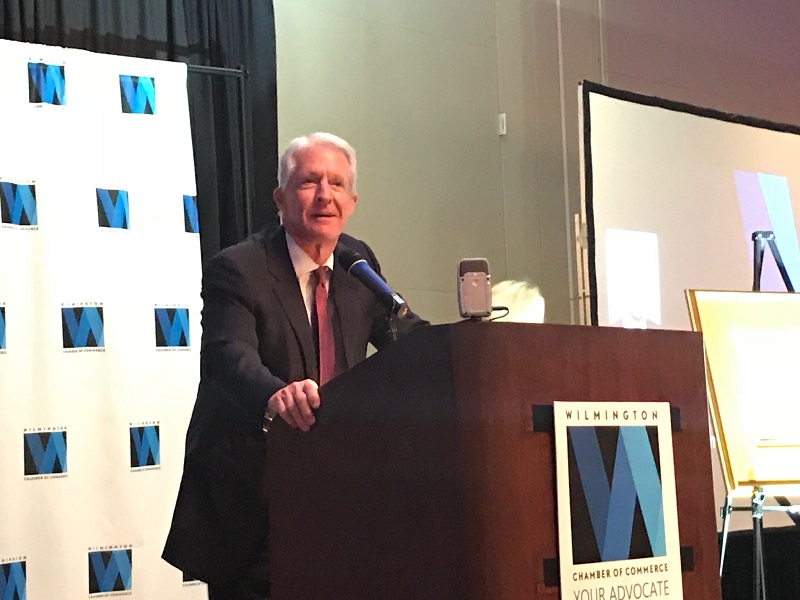 The chamber has a busy year ahead implementing the objectives of its new strategic plan, first made public in October, said Natalie English, president and CEO of the Wilmington Chamber of Commerce. English said that last year the organization facilitated 23 ribbon-cuttings at businesses that represent 290 new jobs for the area.

Charlie Mattox, the 2017 chamber board chairman, officially passed the gavel to 2018's chairman and New Hanover Regional Medical Center President and CEO John Gizdic, who shared some of the chamber's focuses for this year.

"I truly feel our local government, the chamber, our economic development partners, our educational institutions and others are providing a more proactive approach to better position us in an ever-changing global marketplace,” Gizdic said at the event.

One of the leading components moving forward is chamber’s new strategic plan, he said. There are seven pillars identified in the plan -- critical success strategies that were identified as being the most important areas to focus on over the next three years -- including being an effective advocate, ensuring a well-developed and trained workforce and fostering and developing leaders. With that, the chamber is working on some new initiatives that will be unveiled through the course of the year.

To continue workforce development, the chamber's Talent and Workforce Development Committee, lead by  Stephanie Lanier, is organizing the first workforce and talent development luncheon set to take place in April.

The chamber has also entered into an agreement with New Hanover County and Cape Fear Community College to partner on an apprenticeship program. CFCC is currently developing a survey, in which chamber members will be asked to provide feedback on the workforce needs that will lay the groundwork for that program in the future, Gizdic said.

"Apprenticeship in business is becoming the norm. And we want that program to be well-formed and very successful," Gizdic said.

And to grow the chamber’s outreach, English announced the organization of the African-American Business Council, which will launch later this month. The group held its first meeting in January at New Beginning Christian Church. Tracey Jackson, owner of Unexo Framework, was named leader of the council.

Growth in the community through additional airline services, which chamber officials said will both be a boon for tourism and business, was emphasized with the attendance of Grant Whitney, United Airlines vice president of domestic network planning.

Taking the stage at the meeting, Whitney told chamber members United was “listening to its customers” when choosing Wilmington for its new nonstop destinations to Chicago and Washington, D.C., which are set to begin in April.

Whitney said that 80 percent of Wilmington flyers travel to places United Airlines serves, and the five most popular destinations for Wilmington -- New York City, Chicago, Denver, Los Angeles and San Francisco -- are cities where United offers "hundreds of opportunities to connect to business and leisure destinations with just one stop."

“Our analysis showed us that this was a market that United Airlines could be successful in, and we look forward to bringing the United brand and the United network to Southeastern North Carolina,” he said.

In addition, the new service in and out of Wilmington is “perfectly scheduled” to connect to more than 50 international flights on United Airlines and its Star Alliance partner, he said.

"Those direct flights are so important to our economic development, and we are thrilled that United is here and we look forward to making those flights successful,” Gizdic added.

The conclusion of the chamber’s Thursday night meeting came with the recognition of Fred Eshelman, founder of Pharmaceutical Product Development (PPD) and Furiex Pharmaceuticals as well as Eshelman Ventures LLC.

Eshelman was recognized with the chamber's first Lifetime Achievement in Business Award.

The award "recognizes the area's business leaders who have influenced the success of their business through long-term, active and innovative engagement,” said John Elliott, Duke Energy’s regional director for community relations, who introduced the award.

Eshelman moved to Wilmington in 1986 as a one-person consulting firm. It grew into a worldwide name in the pharmaceuticals and contract research organization industry, Elliot said. In 2007, the 12-story PPD headquarters building opened near the Cape Fear River started a "boom for downtown Wilmington and leading to the complete reshape of the Northside," he said.

Eshelman served as PPD's CEO and executive chairman until it was sold to private equity interests. When The Carlyle Group acquired the company in 2011, PPD had more than 10,000 employees globally. The company today has more than 19,000 employees worldwide and more than 1,500 in its Wilmington headquarters, according to numbers released by PPD in 2017.

Eshelman said Wilmington hit all the requirements when he was looking for a place to create a company.

"It had to be in the South. It had to be on the coast. It had to have a fair cost of living and doing business," Eshelman said. "It had to have an available workforce with a good work ethic. And it had to be a good living environment for enjoying time off and for raising children. In other words, Wilmington and the beaches.”

Eshelman said much has changed over the past three decades -- the Wilmington area has seen rapid growth and improved its professional workforce.

"That's a big change since 1985 for the better. My children grew up, they were educated at UNCW and life has generally been very good in this community," he added.

"It's certainly a great honor to receive this award from the chamber,” Eshleman said. “It's certainly been my pleasure to be a part of this community for the last three decades. And hopefully, there have been some contributions in positive ways.”