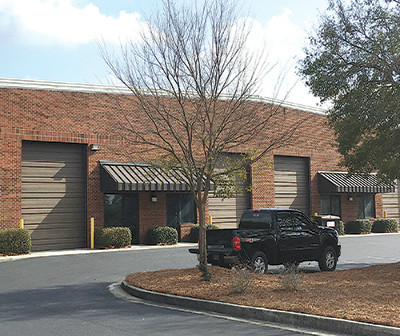 A large portion of this building on Landmark Drive will soon open as a distribution center and the first Wilmington location for Francini Inc., importer and distributor of natural stone and quartz products. (photo by Cece Nunn)
Nick Peterson’s company had considered opening a satellite distribution center in a bigger city.

“We were doing market analyses on Charlotte. We looked at Nashville and Richmond, Virginia, and all the big cities in the area, and the one city that kept popping up, because we already have a customer base here, was Wilmington,” said Peterson, regional manager for Francini Inc.’s Southeastern Division.

Founded in 1994 by Andrea Francini, a native of Massa Carrara, Italy, Francini is an importer and distributor of natural stone and quartz products. Based in California, the company’s southeastern U.S. corporate office is located in Raleigh, along with a nearly 40,000-square-foot showroom and 20,000 square feet of outdoor space.

“We’ve always looked at the South as a good area especially when you get closer to the port cities. It’s easier to get materials because everything’s imported,” Peterson said.

To expand to Wilmington, the company recently leased 8,700 square feet of flex space in a building at 408 Landmark Drive to open a distribution center that will hold its most popular stones.

In recent months, the Wilmington area has been attracting some growing companies that are looking for ways to extend their reach and build their businesses.

“The economy is improving, and with that many companies look for new opportunities. Territory expansion is one of those opportunities,” said commercial real estate broker Tyler Pegg.

Pegg, along with Cody Cress of The CRESS Group of Coldwell Banker Commercial SunCoast, represented the landlord in the lease of the space by Francini.

“Wilmington being the great place that it is, we’re a perfect location for companies in Raleigh and Charlotte to look for expansion space as they look for new territories,” Pegg said.

Brokers Ann-Stewart Patterson and Butch Miller of CBRE in Raleigh represented Francini in the lease. Space like that of Franinci’s on Landmark Drive, owned by TW Landmark LLC, has been dwindling in the Wilmington area over the past 12-18 months as more companies move here and demand has increased, Pegg said.

Peterson said he expects Francini’s Wilmington distribution center to be open by January. Francini sells its products wholesale, mainly to fabricators who work for homebuilders, multi-family developers and commercial projects. But the company also welcomes homeowners referred by builders to pick out the slabs they want for the countertops in their custom homes.

“I felt we would be an asset for Wilmington. Other areas that we looked at – not so much. They were saturated; they already had a lot of distributors. This market is really a relationship-driven market when it comes to contractors and their suppliers, and we’ve developed some very strong relationships,” Peterson said. “We just wanted to show our fabricators and our customers that we’re serious and that we want to take care of them, and so we made a commitment to them by opening up a distribution center.”

It helps that demand continues to increases for stone products like Francini’s, a trend Peterson has seen grow since starting his career in the industry nearly 20 years ago.

“It was pretty busy back then, but there were very few distributors. Like anything, as things become more popular, you start to see more distributors open up,” Peterson said.

Texas-based Blue Bell Creameries announced this month that it would reopen a distribution facility located in Wilmington after having to shut down facilities in response to a listeria outbreak.

Now the business is coming back, including the company’s Wilmington presence.

“It has always been our goal to return to the Wilmington area, and we believe that we are in a great position to expand our sales territory next year,” said Ricky Dickson, vice president of sales and marketing for Blue Bell. “In September, we began selling our ice cream in the central portion of North Carolina and had a very good response.

With the addition of Wilmington, Blue Bell will now be available across most of the state.”

Dickson said the company has “started hiring personnel and will continue to add more as needed over the next few months.”

Capital Sign Solutions officials are looking for a larger space in the Port City to open a full-service retail operation by the first quarter of 2017, said Matt Sullivan, a Wilmington resident who was hired to serve as the firm’s regional business developer.

“I have been part of the Wilmington business community for close to 15 years, and I am pleased to be part of bringing Capital Sign Solutions to this market,” said Sullivan, who joined the company after a career in real estate investment, property management and sales. He said the firm “provides the highest quality signs and service to customers ranging from national insurance companies to local mom-and-pop businesses.”

Sullivan said Capital Sign Solutions is a turnkey sign company, offering concept-to-installation services and placing an emphasis on protecting the brand of clients.

Recent local clients, he said, include Wilmington- based pharmaceutical firm PPD in downtown Wilmington. Sullivan’s company retrofitted all of PPDs exterior signs with a new lighting system and has also completed local projects for Rise Biscuits Donuts and Wine & Design.

“We think this area is full of opportunity,” Sullivan said.

Capital Sign Solutions has 27 employees in Raleigh and has grown 30-50 percent each year since owner Patrick Mills started the firm in 2011.

“Capital Sign Solutions is already doing business in eastern North Carolina, and because Wilmington is thriving, it makes sense for us to have an established presence in the region,” Mills said.

Sullivan said he expects to be working with companies in and around southeastern North Carolina, including Brunswick and Pender counties, to Myrtle Beach, South Carolina.

“We really want to develop this market,” he said.