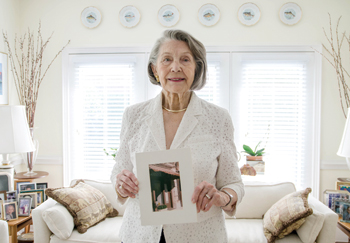 Hilda Godwin (Photos by Katherine Clark)
Over the years, change has been constant in downtown Wilmington. Three people who have watched trends, businesses and initiatives come and go share their memories and perspectives.

Hilda Godwin married a career military man and lived all over the world for almost 30 years. When her husband retired in the late 1970s, the couple moved to Godwin’s hometown of Wilmington.

“When we moved back, Belk Beery was moving from downtown to the new Independence Mall. I had always worked in fashion, so I worked with them to make that transition,” she said.

Soon, however, Godwin decided she wanted her own shop, and she wanted it to be downtown, despite the area’s rundown buildings and ubiquitous adult bookstores and bars.

“I have always loved downtown,” she said. “I bought the three-story building at 105 Market St. and in 1982 opened my shop on the ground floor. My husband and I lived in the two floors above it during the week and spent weekends at our place on Masonboro Sound.”

Godwin’s shop offered better ready-to-wear and formal attire. She brought in designs from New York and attracted shoppers from all over Wilmington. Soon, she bought the adjoining building and expanded. With a vision of a cosmopolitan downtown, she worked with other downtown merchants and residents to improve the look and feel of the area, installing plantings in Market Street’s new median strips, helping to start the Cinematique film series that soon moved from midtown to Thalian Hall and advocating for her vision.

“I wanted mixed uses with boutiques, good restaurants, offices and apartments,” she said. “Individual merchants – no chains – flower plantings and colorful awnings. And I didn’t want downtown to be dark at night.”

But Godwin also was distressed at much of what lit up the city after dark: the many bars and rowdy clientele, especially in those early years. She’s still not entirely happy at the late-night scene downtown.

In 1998, health concerns forced Godwin to close her shop and sell the buildings, but she never stopped caring about making downtown a vital, desirable place.

“I’m so proud of people who had the courage and foresight to redo historic houses,” said Godwin, who still lives in Wilmington. “And the Riverwalk – that’s the best thing the city has done.

“I would like people to understand that we have a gold mine here. The central business district has so much potential.” 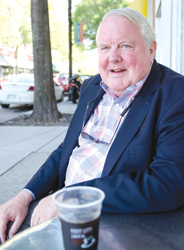 t has lived downtown since 1976, when he moved from Forest Hills to a Victorian on South Front Street. For all those years he has also practiced law downtown, his office now overlooking the cityscape from the fourth floor of a building on North Third Street. He has been active in Historic Wilmington Foundation and with Downtown Area Revitalization Effort (DARE), the forerunner of Wilmington Downtown Inc.

“When we moved to downtown it was a very different place than it is now,” he recalled. “There was no fine dining restaurant. Downtown was full of strip clubs, adult bookstores and bars.”

Britt said that the patrons of two bars on opposite sides of South Front Street regularly got into brawls, and finally he and a group of residents petitioned the state ABC Commission to close one of the bars.

“Now it’s Aubriana’s, which is a really nice restaurant, and that’s my point,” he said. “There has been a positive progression downtown. The challenge is to have a good mix of retail, restaurants and bars. Tattoo parlors are a fact of life, they just are. I don’t see them threatening the security of downtown.”

Britt sees future positives for downtown when Cape Fear Community College’s new Fine Arts Center opens, when the Murchison Building is renovated and when the Water Street parking deck gives way to higher uses. He looks forward to redevelopment of the vacant lot at North Front and Princess streets where the Wachovia Bank once stood.

Most of all, Britt is encouraged at the interest from millennials in living downtown.

“Retail downtown – places such as Edge of Urge and Planet …  – is being driven by millennials,” he said. “So is housing. As a result, we are having apartments built downtown for the first time since the 1950s. City Block will have 129 units catering to millennials and retirees. There are 300 units planned for the marina area and 200 more for property near the [Isabel] Holmes Bridge. These people can walk to work, go out to dinner, go to a bar or show or shop without ever getting into a car. When the north section of the Riverwalk is complete, PPD employees will walk downtown.” 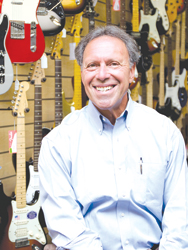 For the past 35 years, Bobby Hamelburg has been at the helm of one of downtown’s most enduring businesses: Finkelstein Music.

When his mother-in-law could no longer manage the demands of the store, he took over and has run a thriving trade in musical instruments, PA systems, audio equipment and jewelry. His son has joined the company and represents the fourth generation in the family-owned business.

“We’ve seen plenty of changes downtown, such as the move to Independence Mall and Mayfaire of some businesses,” Hamelburg said. “Downtown has withstood all of that because of its special charm and history, and because of the Riverwalk.”

Although there are several downtown merchants’ associations, he said, “the merchants do their own thing; they are not tied to a chain.”

Hamelburg said he was happy to hear that the City of Wilmington was planning to move ahead with a convention center hotel despite opponents’ plans to appeal that decision.

“More hotels definitely will come here. The Embassy Suites is good,” he said.

“There will be an influx of more retail downtown because of more hotel capacity and bigger conventions coming to town. Downtown will be a destination, but we do need an anchor store.”

He described downtown as on an upswing.

“We’ve seen change over the years for good,” he said. “Any business has to adapt to change to keep restaurants and retail thriving. Everything seems to be here: art, museums, Thalian Hall, churches. With all that, downtown definitely has a great future.

Hamelburg’s son, Brian, said he’s impressed with the energy and ideas that young people are bringing downtown and sees a future for himself in a business that was founded by his great-grandfather on the same corner of Market and Front streets in 1906.

Asked if he considered moving Finkelstein’s away from downtown when he saw other businesses leaving for the mall or Mayfaire, Bobby Hamelburg said, “It never crossed
my mind.”