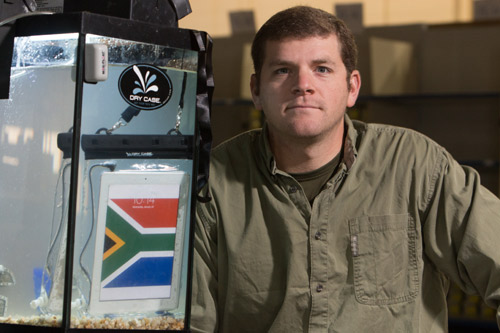 DryCorp's chief operating officer Corey Heim poses with the company's waterproof DryCASE product, which protects devices such as iPads and is now being sold in South Africa. (photo by Jason A. Frizzelle)
Twenty years after Nelson Mandela became president of South Africa, the building blocks of his dream are still being put in place, with some Wilmington-area companies playing a role in that effort.

Mandela, who died Dec. 5, “stopped a revolution so he kept the economy on an even keel. I don’t think you can ever underestimate that,” said Charles Buckland, a native South African and CPA with Wilmington’s Old North State Wealth Management.

But while South Africa is the largest economy on the continent, some roads and telecommunications as well as public health services still need improvement, and unemployment remains stuck at 25 percent.

“Any investment in that country is critical, even from a moral standpoint,” Buckland said.

In Wilmington, several companies have hit the ground running and are helping to strengthen South Africa’s economic and social fiber.

Corning not only helped lay ocean cable to South Africa – buttressing international commerce – but has also forged relationships with a growing number of domestic telecom firms as broadband demand increases in a country of 52 million. With the country’s black middle class more than doubling from 2004 to 2012, according to the Unilever Institute, demand will only accelerate.

In 2012, FibreCo Telecommunications chose Corning’s optical fiber for use in a broadband project stretching from Johannesburg to Cape Town and connecting three other cities.

“Wilmington was the original fiber factory in the world,” said Corning spokeswoman Monica Monin. While four plants now produce fiber, it’s likely that “most” of FibreCo’s supply came from Wilmington, she said.

FibreCo’s selection of Corning coincided with development of the company’s new, low-attenuation (signal loss) fiber, SMF-28e+ LL, which was utilized along with Corning’s LEAF fiber.

“It gave them the opportunity to deploy high data rates … over long distances on land, at lower cost than some of the standard cables,” said Steve Dodd, a regional sales director.

“We have more projects with FibreCo linking to other operators who like this technology, and that’s just here in South Africa,” Dodd added.

Ian Davis, the region’s market development manager, sees great potential for Corning’s new generation of lightweight, high-capacity fiber, which is easily repairable and can be shipped by both sea and air.

“Without more optical fiber delivering that capacity, their networks will not have the functionality that we are used to,” Davis said.

New market partners
While Corning and PPD are established brands in South Africa, Wilmington’s DryCorp is just introducing itself to the market there.

Not only does the country have a 1,700-mile coastline, but there’s a hemispheric benefit in doing business in South Africa.

“Their summer is our winter,” Heim said. “Places like South Africa give us a chance to have some good sales in our off-season, which is their season for the product.”

Last March, while camped out at the North Carolina booth of the CeBIT trade fair in Germany, Heim met Tony Leca, a Cape Town-based entrepreneur.

“We met Corey at this trade fair and were blown away by the awesomeness of the DryCASE product,” Leca said. Now, Leca serves as exclusive distributor for DryCASE through a network of resellers to the outdoor, water sports and mobile tech markets.

Leca is upbeat about market penetration. Although there is strong Chinese competition in the niche, “The outdoor enthusiast market in South Africa and Southern Africa is large and growing,” he said.

And because of Leca’s government accreditation under South Africa’s Broad-Based Black Economic Empowerment Act – aimed at redressing economic inequality among the races through employment and training – DryCorp is able to fully compete in its new marketplace.

“Us acting as their distributor will satisfy these requirements,” Leca said.

Heim concedes that shipping costs to South Africa can be expensive. For the moment, he’s shipping out of Wilmington International Airport.

“Because we have a smaller, sort of accessory product, we’re not doing any volume big enough really to fill a full [sea] container,” he said.

DryCASE leaves ILM about once every two months.

Quality of product is essential for companies that could otherwise be undercut on price in a very competitive market, he said.

The North Carolina pavilion at CeBIT, where Heim met Leca, promotes information technology and software trade and is open to potential exporters for $500 a week. Companies can take advantage of free services like matchmaking that U.S. Commerce offers at the show.

“I think provided you find the right partner, you can do business there,” Buckland said of his homeland.

“We are very upbeat about what the future holds for us as a company and as a country,” he said.