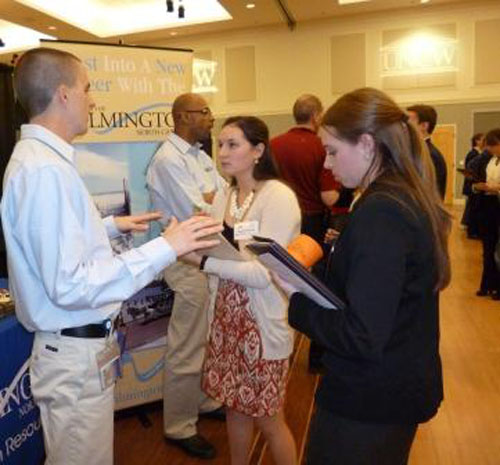 UNCW students talk to a representative from Healthcare Services Group Wednesday at a job fair. (Photo by Jenny Callison)

Michelle Schmidt left the event feeling confident that she would get at least one interview, thanks in part to her Spanish fluency.

Schmidt, a communications studies major, said she wanted to work in human resources and was  looking for internships or full-time jobs that would “let me get my foot in the door.”

“I asked him if it would help if I were bilingual and a woman,” the senior from Goldsboro said of her chat with a staffing firm recruiter at the fair. “And he said ‘Yes, and yes,’ and told me he wanted to schedule an interview next week.”

Well-groomed students handed out resumes and picked up recruiter business cards from more than 50 companies represented at the job fair, held at UNCW’s Burney Center. Those companies and organizations ranged from Wilmington-based PPD to the State Employees’ Credit Union (SECU) and local government to the Peace Corps.

“We’re seeing a slow climb back up in our numbers,” he said. “Another thing is that there are several companies here who have never recruited here before, and several others that we’ve not seen in a few years.”

Corbin Hillman, a junior marketing and finance double major from High Point, was visiting company booths in hope of securing a summer internship related to his fields of study.

“I’ve been applying for internships with finance companies,” he said. “Those companies that don’t offer internships, I’m talking about future employment.”

SECU representative Kimberly Moore said her organization did not limit recruiting to students with a finance background.

“We would consider students with any four-year degree,” she said. “We want someone who has strong communications skills, is outgoing and friendly and would treat our members well.”

“We’re looking for people who are mentally, morally and physically fit,” he said. “From a national pool of about 30 million men and women, we estimate that there are about 180,000 who would meet our criteria for officer or enlisted positions. For officers, the person must have a bachelor’s degree in a field that’s beneficial to the Navy, and they must have a GPA that shows a strong work ethic.”

PPD was one of several employers talking with students about internships.

"We are trying to create awareness of our internship program as well as our entry-level positions," said recruitment coordinator Brent Mann.