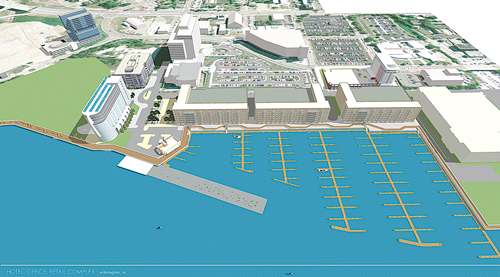 Standing on a heap of debris, surrounded by moving dirt trucks, cranes and sheets of metal, Wilmington-based developer and president of USA InvestCo, Chuck Schoninger, was in observation mode as he scanned the more than 35 acres of riverfront landscape under construction.

“People can’t see all of this, and I wish they could,” Schoninger said during a recent, muggy July morning. “They drive by here, and they see these huge mounds of dirt … but behind it all, we’re making great progress.”

Up first is a 204-slip marina and 10-story Hotel Indigo. Future plans include class-A office buildings, luxury condos and stores spreading out from the marina. And depending on how the politics shake out, part of the property could be sold to the city for a minor league baseball stadium.

Add restaurants to the list of growing attractions slated for the waterfront district.

Larry Rizzo, a partner with USA InvestCo who is overseeing the development’s food and beverage component, recently announced that Charlotte-based restaurants BlackFinn and Vida Mexican Kitchen y Cantina will soon anchor part of the development.

The two eateries – both mainstays in the Charlotte dining scene – are just two of possibly six new restaurant or entertainment venues that could dot the development in the coming months.

Pending design and city permitting, Rizzo said construction could begin on the two new restaurants by the end of the year, with openings set by the summer 2013.

“We’re conducting statistical data to make sure that the next venues we bring on board can also be supported by the area and are a good match for the region,” Rizzo said. “In the end, we chose BlackFinn and Vida because they both offer a great product. It’s affordable, and we feel both have a regional presence. We want to continue bringing on board venues that are a good match for Wilmington.”

Both restaurants are being designed to incorporate modern design similar to the PPD headquarters in an effort to promote architectural contiguity in the area.

A. Kyle Myers, project manager overseeing the hotel and restaurants’ construction as well as design within the development, said both establishments will incorporate lots of glass, sharp angles and pitched roofs.

“We want to fill that space with smaller venues,” Rizzo said. “For example, a yogurt shop or a wing joint … something where people on the go can stop and grab something quick.”

Meanwhile, work on the development’s Hotel Indigo is moving swiftly.

Myers said crews are now going through their third round of reviews with the city’s technical review committee.

He said once the city’s submissions are in, Winston-Salem-based CJMW Architects will complete the final set of renderings for the $25 million hotel, with team developers contracting out the construction there after.

Myers said officials hope to begin site work on the 1.27-acre block fronting Hanover, North Front and Brunswick streets by the fall, with construction on the actual hotel going vertical by December.

Amenities are expected to include a first-floor restaurant, rooftop pool and bar area with a sky roof, ninth-floor flex meeting space and suites with views of the Cape Fear River and downtown.

Developers plan to complete the hotel project by spring 2014.

“We’re trying to start as soon as we can,” Myers said. “We’re working on the interior design of the hotel, along with the equipment planning for the kitchen and bars … It’s getting down to the fun stuff.”

He said bringing the development on board is important, adding that downtown should have something for everyone.

“You want your urban markets to be 20s, 30s, 40s, 50s and 60s,” Schoninger said of the adult age groups that frequent urban cores like downtown Wilmington.

“The 20-year-olds have the bars, the 50- and 60-year-olds have Thalian [Hall] and, soon, the performing arts center. But for the 30- and 40-years-olds, there’s not much for them to do. My hope is to change that with the development.”