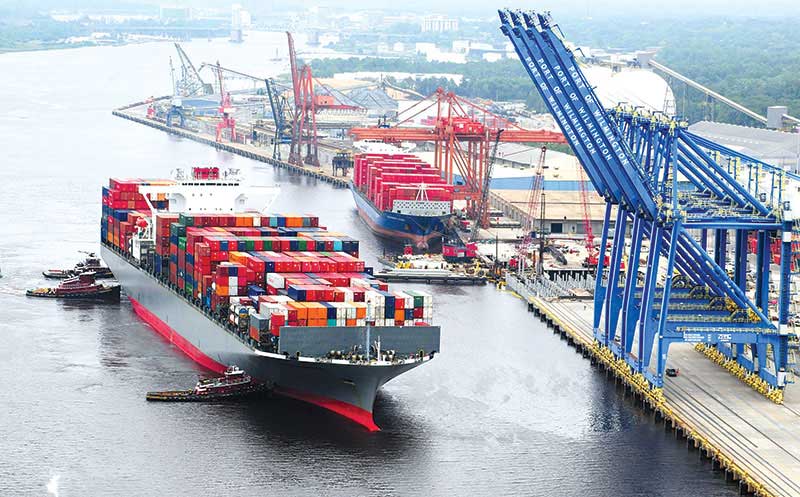 The Port of Wilmington is experiencing scheduling disruptions for two of its eight services as a result of recent global supply chain issues. (File photo)

While billions in goods sit anchored outside the ports of Long Beach and Los Angeles, six of the Port of Wilmington’s eight weekly services are arriving on time with no scheduling difficulties. These steady routes are coming from Central and South America and Europe.

Local hiccups are occurring in the Wilmington port’s two Asian trans-Pacific services, according to Brian Clark, executive director of the N.C. State Ports Authority. These routes utilize neo-panamax vessels – the largest the port is equipped to handle.

“It’s a mess,” Clark said of the industry's trans-Pacific services. “So what we're seeing is really downstream impacts from these delays.”

Buying activity frozen by pandemic closures has since thawed, with national retail sales up 28% in the second quarter of 2021 compared with the same time last year. Major components of the global supply chain – including ports, perhaps most noticeably – have been unable to meet renewed demand.

“It's not just a port issue that’s leading to these backlogs,” Clark said. “There's so much more that goes into it: load ports, staffing levels, equipment imbalances, the overall fleet capacity. The entire container fleet with all operators is pretty much underway. It's being utilized.”

Typically arriving on a consistent weekly basis, these vessels may be significantly delayed or arrive within a couple days of each other, creating scheduling difficulties for the ports’ operations team.

Despite local scheduling hurdles, global supply chain disruptions might present the Port of Wilmington an opportunity to nab carriers frustrated with backlogged traffic at larger facilities.

On the East Coast, the trans-Pacific vessels typically make a first stop in New York, New Jersey or Savannah, before arriving at a secondary port like Wilmington. Lately, the Port of Savannah has between 20 and 30 ships lingering offshore at any given time, Clark said.

Imports at the Savannah port are surging, up 30% this calendar year, according to the Wall Street Journal. The Savannah port is handling 500,000 20-foot equivalent units (or TEU, which essentially represents one cargo container) each month; Wilmington’s port saw 324,000 TEU over the latest entire fiscal year, which ended June 30.

That total set a new record for Wilmington, with container volume up 2% from fiscal year 2020. Volume is up 39% since fiscal year 2017.

As carriers are confronted with historic delays, many are reimagining routes and transportation modalities.

Container volume is on par with last fiscal year and slightly down from forecasted expectations at the Wilmington port. However, general cargo volume (goods delivered without the use of containers) is significantly on the rise, Clark said. Some of this material is likely volume that would otherwise be bound to containers, but due to a lack of equipment or space, has been reoriented. The redirection is caused in part by the global shortage of containers and vessels equipped to ship them.

“There’s a lot of review in the industry as a best means to get the cargo to the endpoint,” Clark said.

Congestion in Savannah led a major carrier to temporarily suspend trips there in favor of a more low-traffic point in Jacksonville, Florida, according to The Maritime Executive. The Journal of Commerce reported last month at least three carriers diverted shipments away from Savannah to Charleston in an attempt to work around the logjam.

“It's a great opportunity for new business,” Clark said. “If shippers are looking to diversify their supply chains, if they're looking to move cargo across other ports that aren't as congested or aren't congested, this puts us in a great spot to be able to capture some of those opportunities."

Clark said his team is in constant communication with carriers to stay abreast of ever-changing scheduling updates and to make them aware of Wilmington’s availability.

From a berth capacity standpoint, the Wilmington port could potentially double its current inbound container vessel traffic. “Theoretically, we could accept an additional service pretty much every day of the week,” he said.

The port boasts an 18-minute truck turnaround time, a factor that has led to its listing as the most productive port in North America in 2019.

Late Friday, Congress passed Biden’s trillion-dollar infrastructure bill. With the legislation soon destined to collect the president’s signature, the bill contains $17 billion in funding dedicated to port infrastructure. At this point, it’s unclear what this port-dedicated tranche of money will be put toward and how it may be used.

As for Clark, he’s wrapping up his Christmas shopping ahead of time: “Everybody should start early.”