Port: $19M Refrigerated Container Yard Expansion One Of Many Projects 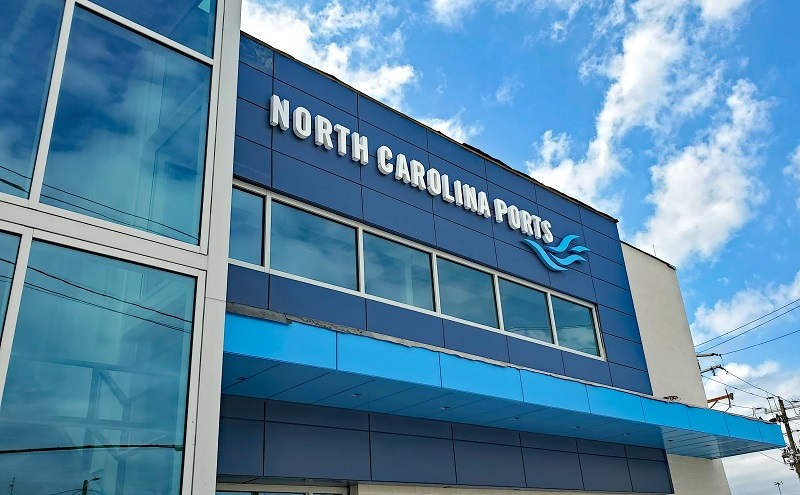 N.C. Ports is continuing work on its South Gate project, which includes a new container office building, pictured above. (Photo courtesy of N.C. Ports)
An expanded refrigerated container yard is just one of several projects in the works at the Port of Wilmington.

The $19 million yard expansion is part of the ports' $221 million capital improvement plan, which is currently being implemented through various changes at the port.

New signs have been raised on N.C. Ports' new container office building, as it looks to complete its new gate later this year.

The new truck gate interchange will feature technologies to improve safety and efficiency, including optical character recognition, weigh-in motion scales and radio frequency identification that will allow trucks to move through the gate without stopping, port officials have previously stated in a news release about the project.

“The new South Gate Container Complex will include the latest technology to drive efficiencies in the overall trucker interchange process, which means even better turn-times than what they experience today," said Doug Vogt, N.C. Ports COO, in an email this week.

The port is also nearing the completion of its Terminal Operating System, or TOS, which is anticipated to go live with phase 1 at the end of June (on the current gate complex), and phase 2 of the system by the fall.

For the refrigerated container yard expansion project, officials are currently in the engineering design phase. The expansion is estimated to be complete by late 2022.

These projects, however, do not complete the capital improvement plan, port officials said. Work is still slated to be conducted on a redesign of N.C. Ports' intermodal yard and some additional paving needs around the port, officials said.

“These capital investment projects are designed to increase our overall terminal capacity and throughput," Vogt said, "while also improving our ability to service our customers and local port-user community."