Port: Coronavirus Impacts To Cause Some Missed Sailings 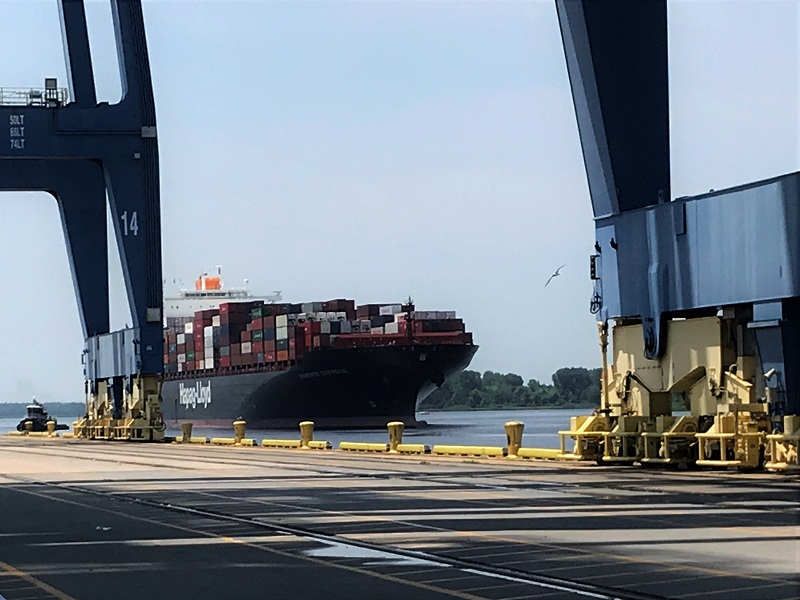 A container vessel with Hapag-Lloyd, which is one of several container carriers that serve the Port of Wilmington's Asian routes, approach the port's docks. (File photo)
The Port of Wilmington will experience some cancellations in its port schedule over the next two months due to impacts from the coronavirus outbreak and the extended Lunar New Year in China, port officials said Tuesday.

The three blank sailings are from one of the port’s shipping groups that connect the Port of Wilmington to ports throughout Asia. The canceled sailings are impacting other ports along the service's route as well, Welch said.

“It’s not that no ships from Asia are coming to the port. We will continue to see ships as part of our weekly container services,” Welch said. “But what happens, instead of that ship coming at its originally scheduled time it may come a few weeks later.”

The Lunar New Year was extended due to the coronavirus outbreak in China. The outbreak happened around the start of the holiday, which ended Feb. 2, and as a result, several cities in China were quarantined, including Wuhan. The virus to date, has taken thousands of lives and spread to parts other parts of Asia, Europe and the Middle East.

The virus has also impacted business in China creating ripple effects in the global economy.

​"We anticipated seeing a slight lull in business due to the virus and canceled sailings but do not anticipate a significant impact to volume moving through the Port of Wilmington," Welch said.

The Port of Wilmington has a weekly transpacific service that touches six Asia-based ports in the Far East and Northeast Asia. Six shipping carrier lines serve the Port of Wilmington: Yang Ming Marine Transport Corp., Hapag-Lloyd AG and Ocean Network Express (ONE) Co., which are part of THE Alliance shipping group; Mediterranean Shipping Co. and Maersk Line Co., which are in the 2M Alliance; and Zim Integrated Shipping Services Ltd.

Some of the virus's impacts are to global trade and the shipping lines that move goods from China to other parts of the world.

Shipping service ONE, for example, said that its management team has formed a task force and activated its business continuity plan, which structures its response to significant events like the coronavirus outbreak, according to a company notice on its website.

The majority of ONE's China offices have reopened with staff available on-site, stated the Monday notice. An office, in Wuhan, however, where the outbreak started, remains suspended until further notice.

Maersk Line Co. earlier this month also noted impacts in its 2019 annual report to investors, stating, "As factories in China are closed for longer than usual in connection with the Chinese New Year and as a result of the COVID-19 [coronavirus] we expect a weak start to the year.”

The outbreak of the coronavirus poses challenges and risks to the company’s operations, stated the Feb. 20 report.

“It is expected that the COVID-19 could dampen 2020 volumes, due to the extension of the Chinese New Year holidays and emergency measures to curb the spread of the virus," officials stated in the report. "It is still early days to measure the overall impact, however, the weekly container vessel calls at key Chinese ports were significantly down compared last year during the last weeks of January and the first weeks of February.”

Freight rates are also expected to decrease due to dropping demand for containerized goods transport, it said, adding that the outbreak has led to delays in Chinese shipping yards opening following the holiday.

The impacts so far at the Port of Wilmington, however, are only through the three canceled sailings. So far, there are no other blank sailings scheduled at this time, Welch said.

N.C. Ports is "monitoring the situation closely and are following protocol set by the United States Coast Guard," Welch said, adding that the Coast Guard has established safety and security standards for U.S. ports regarding the coronavirus.