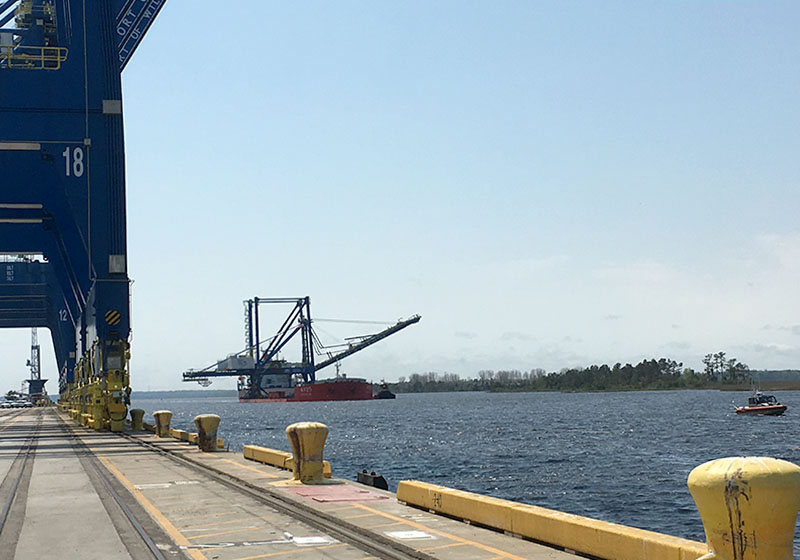 A nearly 1.6-ton, 151-foot-tall neo-Panamax crane arrived at the Port of Wilmington on Monday. (Photo by Jenny Callison)
The Port of Wilmington welcomed its third neo-Panamax crane Monday afternoon, a long-awaited element in the port’s major infrastructure initiative. The new crane joins two identical structures that arrived at the port in March 2018.

The specialized ship carrying the crane made its way up the Cape Fear River, arriving about 1 p.m. Monday.

Installation of the new crane will take about two months. The crane -- along with berth enhancements to give the port 2,600 consecutive linear feet of docking and unloading space, and widening of the port’s turning basin – will double the port’s capacity and triple its refrigerated container capacity, officials said.

While all the port's cranes are used to load and unload cargo, the neo-Panamax cranes enables the Port of Wilmington to handle 14,000 TEU vessels, the largest ships currently calling at East Coast ports.

TEU stands for twenty-foot equivalent unit, which can be used to measure a ship’s cargo carrying capacity. The dimensions of one TEU are equal to that of a standard 20-foot shipping container, which is 20 feet long and 8 feet tall.

The third crane will be positioned along the dock to facilitate unloading of two neo-Panamax cargo ships simultaneously, Brian Clark, N.C. Ports' chief operating officer, said Monday after supervising the crane’s safe arrival at the port. That has not been possible before, he said, adding that he anticipates demand for such capacity once the port enhancements are complete.

A third element to increasing the port’s neo-Panamax capacity, and thus its ability to compete with other ports, is a wider turning basin. That part of the port plan has run into difficulty: in March the N.C. Division of Coastal Management denied the port’s application for the necessary dredging and construction permit, citing environmental concerns.

The N.C. Ports is appealing that decision and has presented a mitigation plan to address the state department’s concerns about a wider turning basin’s environmental impact, Clark said, adding that a variance hearing is scheduled for this month.
Ports officials are hopeful that they will get a thumbs-up on the project, given the mitigation measures they propose, Clark said.

The three neo-Panamax cranes were purchased for $33.8 million from Shanghai-based Zhenhua Heavy Industry Co. Ltd. (ZPMC). ZPMC is the world’s largest heavy-duty equipment manufacturer of port equipment, according to Port of Wilmington officials, who added that there are currently no American manufacturers of ship-to-shore container cranes. Each weighs 1,553 tons and stands 151 feet high.