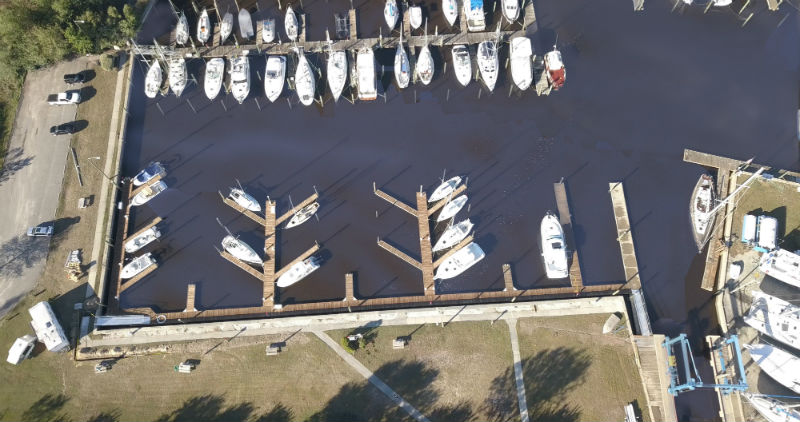 The 30 boat slips were constructed in the southeast basin of the marina located at 3410 River Road, where it previously housed 12 fixed boat slips that made it hard to access boats, said Mike Loch, marina manager at Wilmington Marine Center.

With plans by construction and engineering company Bellingham Marine Industries Inc., the marina was able to add more slips with a new design that allows boats to approach the slips at a 45-degree angle instead of a 90-degree angle, according to a news release.

Construction for the boat slips started in June with the demolition of the old slips. The new docks were installed in July but permitting and engineering started in the fall of 2017, Loch said.

Besides maximizing the space, the expansion also makes the boat slips user-friendly.

“It is easier to get on and off with a dock that is rising and falling with the tide,” Loch said. “You have to really see the way that the property looked prior to the new slips and after the new slips. We think they look 100 percent better.”

The center’s expansion efforts are planned to meet the growing demand for boat slips in the area, Loch said.

“If you try to find a slip in Wrightsville Beach or Carolina Beach, there are pretty much no slips available,” he said.

Because of the marine center’s proximity to the RiverLights community, a mixed-use development on River Road, it expects to have more residents with boats that would require more boat slips, Loch said.

The boat slip expansion will also address the demand for smaller boat slips that accommodate the growing popularity of boats up to 25 feet in size, he said.

The new slips have spaces for different boat sizes, including 18-, 25-, 32- and 68-foot boats, according to the release.

The center’s expansion efforts will also include 30 additional boat slips to be built next year, Loch said.

The planned boat slips would be added in the southwest portion of the marina and the goal is to have those slips installed by fall 2019, he said.

Along with those planned 30 slips, the marine center will also build a clubhouse for boaters, according to the news release.

“We’re an active marina,” Loch said in the release. “The Cape Fear Rowing Club is based here, and we have plans for a clubhouse and other amenities for our boaters in the not too distant future.”