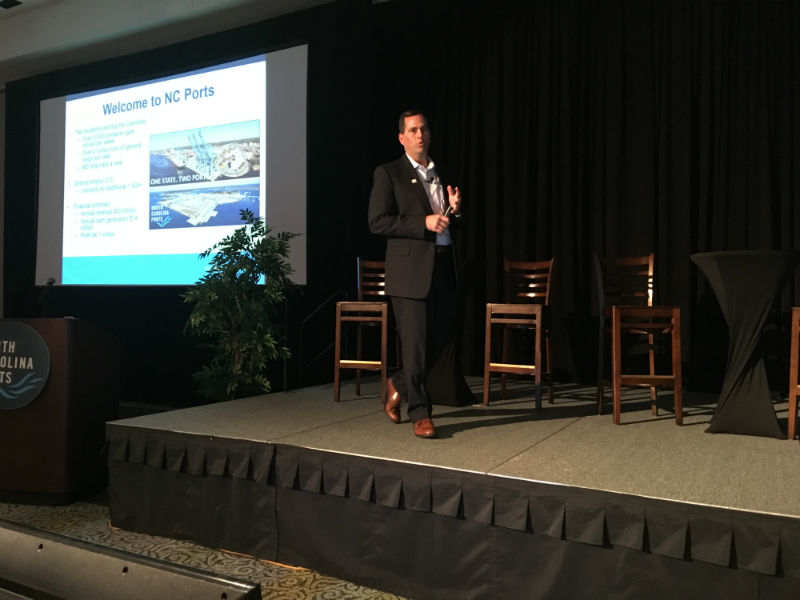 The talks took place at the Cold Chain Summit at the Wilmington Convention Center, where about 150 people were in attendance.

The panels and discussions focused on current markets, agricultural growth, consumer behavior and the environmental impacts of the global cold chain industry.

At the Homegrown North Carolina panel, panelists discussed the growth of state agricultural products in market areas such as Europe, infrastructural needs and what N.C. ports can do to attract more companies that can use its services.

“Global consumption of animal proteins will only grow in the next years,” Kovalev said. “Growth will happen and its likely to happen here in Southeast North Carolina. With Wilmington, there is a huge potential here because it makes all the economic sense in the world to ship our containers out of Wilmington as opposed to Savannah or Charleston.”

Jose Calderon, sales manager at Farm Pak Products and Barnes Farming Corp., said there has been a big growth in sweet potatoes grown in the state. About 130,000 acres of sweet potatoes are grown in the U.S., with 80,000 of those acres in North Carolina, he said.

“The main reason North Carolina had that explosion in growth in exports,” Calderon said. “Once North Carolina started exporting, all those acres started increasing. In E.U. markets, especially in the U.K., when you talk about a sweet potato, they know it is a North Carolina-grown sweet potato.”

While North Carolina-based agriculture has seen a growth in exports, panelists said there are some developments N.C. Ports can work on to bring more of those agricultural products to the port to be exported.

Jason Lloyd, director of freight trade at Interra International, a company that sources soybeans and poultry, said Interra would benefit if N.C. Ports had more services available to more parts of the world.

“We need to have additional carrier options for us to be able to hit up new markets,” Lloyd said.

Kovalev said one improvement N.C. Ports can focus on is having more services out of Wilmington, including service to other locations.

Jay Brickman, vice president of government services at Crowley, a trucking company, said another area N.C. Ports should consider is its available technology, including how it can implement documentation and notifications quicker.

“What we are finding is a little different operation than we are accustomed to as we bring in more technology, like automated monitoring of equipment,” he said. “How do we get the economic impact of those investments to work with the Port of Wilmington?”

Some of those port concerns where addressed by Brian Clark, N.C. Ports chief operating officer, during the N.C. Ports Overview and Future Plans presentation where he gave details on N.C. Ports' infrastructure plans.

“On average, we're deliberate about 40 container moves per hour, so as we look up and down the coast, this is what separates us from our competition,” Clark said. “We've heard that we don't have the services that we need to have in the port, were certainly looking to push that forward get new customers and be able to other markets.”

Part of the port’s $200 million infrastructure improvement projects, for ports in Wilmington and Morehead City, includes Berth 7 redevelopment, which Clark said will be finalized by June.

The container yard master plan is the long-term vision for the future of the port, he said.

The plan is spread out into 12 phases with the project starting in 2019 and completion expected in 2025.

The first phase of the plan includes a new reefer yard storage area that will expand the stacking amount of refrigerated cargo boxes. This first phase is expected to be finished next year, Clark said.

Yard plans also include an expansion of its terminal gates that will be designed over the next 12 months and will be constructed when the new reefer yard is open.

Another part of the infrastructure improvement includes the re-pavement of the container storage terminal which will be done in several phases.

The port also plans on rebuilding the gate complex with the goal of minimizing the time drivers stay on the lanes. The new gate will be constructed next year and will be completed in September 2020, Clark said.

The goal of the improvements is for the port to have the capabilities and tools to handle business when it comes, he said.

“This is only the beginning for North Carolina Ports,” Clark said. “The infrastructure improvement plan will continue to make the Port of Wilmington an attractive global gateway for our customers today and well into the future.”