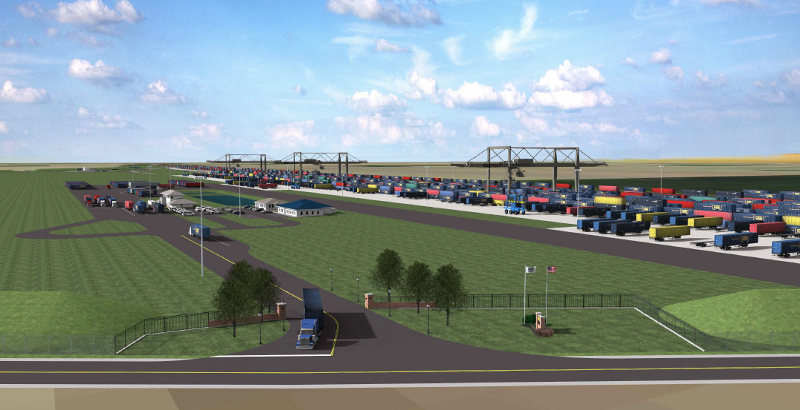 The N.C. Department of Transportation announced Thursday that it has reached an agreement with Jacksonville, Florida-based CSX Corp. about the intermodal facility planned for Edgecombe County.

The facility, however, is smaller than what officials initially announced in 2016 about the project. Originally estimated at more than $270 million on more than 500 acres of land, the Carolina Connector (CCX) project is now estimated at $160 million on 330 acres, according to a CSX spokesman.

The company's investment in the project also is substantially less than originally envisioned. Officials said CSX's contribution for the project now will be about $40 million, which includes costs for property, equipment, design and construction oversight, as well as operational expertise. CSX was previously going to invest $160 million in the earlier plan.

NCDOT will invest up to $118.1 million for site development and roadway construction, according to Thursday's release.

Originally, CSX intended to build a hub-and-spoke intermodal facility at the site in Edgecombe County, which according to Census estimates has a population of nearly 53,000.

In late 2017, CSX put its plans for CCX on hold, and it was unclear what remained of the project as the company went through changes in its leadership and reassessed its long-term business model.

The newly envisioned site will be a traditional intermodal site that will allow trucks to bring cargo containers to a rail yard, where they will be transferred to trains for transport, NCDOT officials said, adding "this facility will serve many industries with efficient access to rail."

"This project ... complements CSX’s intermodal strategy and our scheduled railroad operating model, providing intermodal connectivity to a major consumption market in the Triangle Region and Eastern North Carolina," a CSX spokesman said in an email.

The newly-designed project is set to have an annual lift capacity of 110,000 containers, CSX officials said.

The CCX facility will be built on the CSX mainline, and CSX will run it, NCDOT officials said in the release.

In an economic impact evaluation conducted by NCDOT in early June, the project was determined to have an "indirect job impact of up to 1,300 jobs," state officials said in the release.

Both officials with CSX and NCDOT said the facility could start operations in 2020.