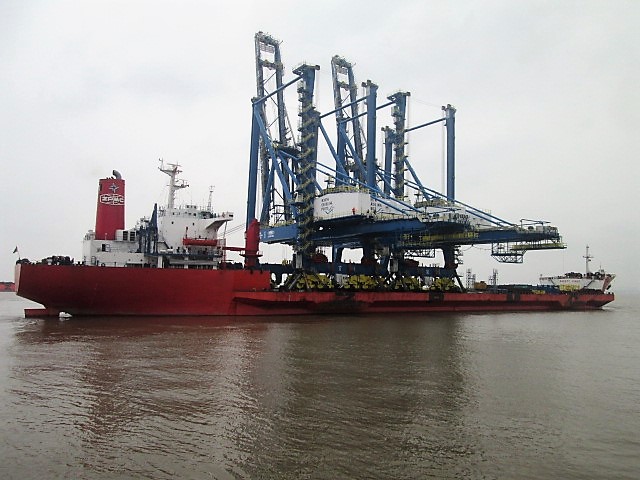 Two new cranes bound for the Port of Wilmington are scheduled to arrive this spring. (Photo courtesy of N.C. Ports)
N.C. Ports is expecting the arrival of two neo-Panamax cranes this spring, building upon the port’s ongoing infrastructure improvements that officials have said will increase its global marketability.

The two cranes were constructed by Shanghai Zhenjua Heavy Industry Co., the same company that built the port’s current post-Panamax cranes, according to Bethany Welch, spokeswoman for N.C. Ports. The neo-Panamax cranes are now in transit from China and will pass Singapore on Wednesday, she said.

The added infrastructure will allow the port to remain competitive with other ports on the East Coast, and continue to open up the Port of Wilmington as a global gateway, Welch said.

“We want to keep up with the growing demand of our carriers … it will be a good marketing tool for us to attract new container lines and expand on the service lines we already have calling the Port of Wilmington,” she said.

N.C. Ports has a third neo-Panamax crane under construction, for a total price tag of $33.8 million for all three cranes. The additional cranes will bring the port's total to nine container cranes in-service at the port.

The investment is part of the port’s ongoing infrastructure improvements, in which N.C. Ports has pledged to spend about $200 million at the Port of Wilmington between the new cranes, berth improvements, container yard expansion and turning basin expansion.

Turning basin expansion was completed in August 2016. Meanwhile, berth improvements at the port are ongoing, with construction on berth eight set to be completed in time for the arrival of the two new cranes, Welch said. Soon after, construction will move to berth seven.

The new cranes are set to arrive at the Port of Wilmington in March or early April. Once in place, the port will have the capability to operate two post-Panamax vessels at the same time, serving vessels upwards of 14,000 TEUs (20-foot equivalent units). The third crane is scheduled to arrive sometime in late-2018 or early 2019.

“This is really going to open up the Port of Wilmington to vessels of the future," Welch said. "We are big-ship ready, but now we are going to be able to serve even larger vessels, which is going to be a boost for not only the local economy but the state economy as well.”