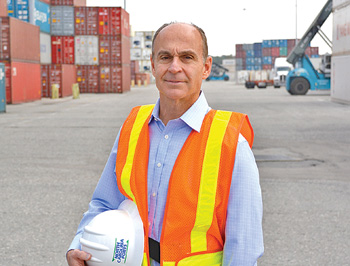 To mark that milestone, Cozza is eager for the ports to further develop and showcase their competitive strengths as well as move ahead with wood pellet storage projects at both state ports and a cold storage facility at the Port of Wilmington.

While his official title is chief executive officer, Cozza believes an important part of his job is to be a sort of chief sales officer, and he will use the anniversary year as “an opportunity to communicate the ports’ economic benefits to the state,” he said in a recent interview.

“We did a recent study with the economic departments of N.C. State University and University of North Carolina Wilmington to determine what and how we are doing,” said the ports chief. “The study showed we make a $14 billion annual economic contribution to the state. We support more than 76,000 jobs statewide and generate more than $700 million in state and local tax revenues. We are accretive to the state of North Carolina, and our infrastructure is not so terrible that we can’t grow.”

As an organization, the Ports Authority needs to “show the state we do have a vision, capacity, capability” to attract additional business and distinguish itself from other East Coast ports, Cozza said.

Cozza’s early impressions of the Ports Authority are encouraging ones.

“I find the organization – the people and infrastructure, the way we do things – in a very good state,” he said. “There is good service to customers; there are differentiated services. The challenge is getting the message out around the state about the size of our business and our potential. I see a lack of enthusiasm [around the state]. There are things we should be proud of, things we’ve been doing well.”

He wants the board to send a strategic plan to the General Assembly, outlining its goals and making a strong case for why the state should invest in its two ports.

“For the state of North Carolina, we need to have a 25-year plan. Everything takes time. We are a conduit of business. Transportation links are critical,” Cozza said.

The ports chief was generally supportive of the state’s 25-year transportation plan recently unveiled by Gov. Pat McCrory and Department of Transportation secretary Anthony Tata.
“It’s strategic. It looks at transportation long term and positions [the state] for economic development. There’s a focus on ports and how we fit in,” he said.

“It’s early, but we’re going in the right direction,” he said.

Cozza emphasized that North Carolina’s ports will never be able to compete with major East Coast ports on volume but can woo additional business by fostering strong relationships with customers and providing high-quality, efficient services. It’s a philosophy similar to that of officials at Wilmington International Airport, who turn the airport’s size to an advantage, marketing it as a convenient, friendly and customer-responsive terminus.

Ports Authority officials, including Cozza, point to the attitude of the organization’s nearly 240 employees – especially in comparison with often-contentious relationships that exist between labor unions and waterfront employers in Pacific Northwest and California ports.

“We have a great situation with organized labor; they are our partners,” Cozza said.

The wrong focus on volume, too, can sometimes get in the way of customer service.

“Congestion at port terminals is a huge issue across the U.S.,” Cozza said. “At ports like Long Beach and L.A. it can take days, rather than hours, to load and unload. We need to look at our advantage here.

“Ours has to be a continuous, long-term view. We don’t have congestion issues, but we can do better. Our competitive strategy is not through volume but through differentiated services.”

Still, there is capacity for additional volume, and the planned wood pellet and cold storage facilities should drive an increase in business, Cozza said.

“USA InvestCo will soon be breaking ground on the cold storage site. This will be a real help; it’s exciting,” Cozza said.

Some of North Carolina’s neighbors are already looking at ways to better steer their organizations. Cozza cited the efforts of an industry task force to improve efficiencies at the Port of Virginia.

The whale in the room for ports these days is the advent of post-Panamax vessels, with the expanded Panama Canal scheduled to open in 2015.

The larger canal will allow the super-sized container ships to pass through, and industry experts predict that post-Panamax vessels will soon dominate the East Coast fleet.

Wilmington, as the state’s port that handles container cargo, could see growth if the jumbo vessels came its way, officials have said. But channel depth remains the issue.

“We’re working expediently with the Corps [U.S. Army Corps of Engineers] on a feasibility study, which will look at deepening the Cape Fear River channel from an economic and environmental perspective,” Cozza said.

He said he feels “confident” that increasing channel depth will get federal approval, although there has been opposition because of environmental concerns. Another potential obstacle, however, is funding.

“We have to show that we have the capability” of handling the big container vessels to get state and federal funds for the project, Cozza said.

Meanwhile, North Carolina’s ports are looking at niches where they can develop new business within their current capabilities.

One such niche is the shipping of bridge girders, as took place this past fall with a shipment of giant beams from the Port of Morehead City north to New York for the rebuilding of the Tappan Zee Bridge.

“That is a fantastic business and shows our capacity to meet the needs of a particular industry,” Cozza said. “[A niche we develop] could be something that other ports don’t want but where we want to market other, higher levels of services.

“There is a future for the North Carolina ports. There is energy at the ports. We know we’re providing service to the state, and we can do a little bit better.”