Making Waves In The Spearfishing Industry 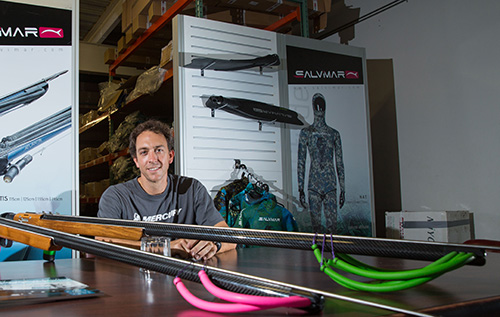 Mark Laboccetta, founding partner of Maverick America, is shown with spearguns manufactured in-house, part of a new line of spearguns and other spearfishing products made at his facility in Wilmington. (Photo by Chris Brehmer)
A local spearfishing record-holder is looking to make his mark in manufacturing spearguns.

Spearfishing and free-diving have been an inherent part of Mark Laboccetta’s past.

At the age of 8, Laboccetta’s father taught him how to free dive and spearfish off the coast of Sardinia, a large Italian island in the Mediterranean Sea where his family once called home. There, his father first instilled in Laboccetta a love for the sport.

Years later, this deeply rooted passion for spearfishing and free diving has transformed into a way of life and a lucrative business for Laboccetta, founding partner of Maverick America, a Wilmington-based national distribution company that’s expanded into manufacturing.

“My dad used to take me spearfishing for octopus and ... we would take turns and dive down, pulling fish in,” he said. “I didn’t realize it at the time, but I was learning to spearfish like he had, which was breath-hold diving.”

When his family moved from the island to the United States, he regained his spirit for the sport, diving off North Carolina’s coast. While many of the local spear fishermen he met used scuba tanks, Laboccetta was one of only a few who utilized the technique of free diving, going down to depths of dozens of feet to target a fish on the strength of his own lungs.

Though his family lived in Virginia, Laboccetta would make frequent trips to Wrightsville Beach while attending the College of Charleston to spearfish off the jetty. It was in Wrightsville Beach where he met his wife, Lydia, who is also an avid spearfisher. Together the two hold multiple world records in the sport.

Today, his spearfishing and free-diving experiences have integrated into his 26 years of experience and knowledge of the industry.

He founded the locally based company in 2015 with California-based partner Petros Yiannikouros. In its first year, Maverick America reached more than $1 million in revenue, company officials said.

But Maverick America isn’t the only spearfishing company Mark Laboccetta has owned.

In 1997 his family started another distribution business for the U.S. industry called Technosport, which was eventually bought out when a public corporation acquired Italian scuba, spearfishing and free-diving manufacturer Omersub in 2013.

After building that company for 15 years, Mark Laboccetta was determined to start fresh and relocated to Wilmington to open Maverick America for his own grassroots venture.

“The idea behind Maverick was to fix this issue of becoming an acquisition target,” Mark Laboccetta said about the start of the business.

“Growing a business starting locally with feedback from your community and organically is the healthiest growth, I think, for a small company. And having really good, dedicated employees that feel like it compliments their lifestyle is key and will help in the bigger picture to succeed,” he added.

Maverick America today employs four people in-house and two remotely. The company has grown its distribution to 240 stores nationwide – as well as stores in the Caribbean, Central America, Canada and Bermuda – making its mark in this $50 million global industry.

The company sells multiple brands for the spearfishing and free-diving enthusiast – everything from apparel such as masks, flippers and wetsuits to speargun parts.

Recently, his company expanded from its small location in the Dry Corp building off Military Cutoff Road to a second location – a renovated 7,500-square-foot building at 1316 S. Fifth St. near downtown Wilmington.

Maverick America still has its retail outlet off Military Cutoff Road, while the new space is devoted to the company’s showroom, warehouse and shipping operations, as well as manufacturing.

In July the company partnered with Worth Products, a Snow Hillbased company that specializes in CNC machining and fabrication, to begin manufacturing a line of spearguns in-house.

Worth Products is building parts for the guns with its CNC machine housed inside 2,000 square feet of the Fifth Street building, which combines the Worth Products machine shop and office space in Wilmington with Maverick American’s speargun fabrication area. The company is subleasing the space to Worth Products.

Worth Products helps Maverick American manufacture pieces for spearguns, including trigger mechanisms, handles, spear tips, spear shafts and other items for the sport.
In this new manufacturing side of the business, Mark Laboccetta has two additional partners, Chad Wouters, a local CPA who does the books and helps with strategy, and Alejandro Franco, a Mexican investor who will help procure the teak wood used to build the company’s line of seven spearguns.

Six spearguns are manufactured and assembled in Wilmington.

Mark Laboccetta also plans in November to launch a speargun with “a unique concept that will be the first in the industry.” He said the business is not only geared toward selling quality products, it’s also about promoting a sustainable way of fishing in the industry.

“Here locally, spearfishing is growing. So in order to sustain its growth in a safe way and healthy way, as all these young kids are getting into it, we feel like our responsibility as a company selling spearfishing equipment is to teach these kids how to really care for their environment and treat taking fish ... as a privilege and not a past time.”

Within three to five years, Mark Laboccetta said, the company is forecasted to grow up to $5 million revenue and aims to be the nation’s largest supplier of spearfishing and free-diving equipment, including his line of spearguns.

“We hope to integrate the finest made-in-North Carolina speargun production into the distribution company to make it available not only to North Carolina spearfishers but to the rest of the industry in the United States,” he said. “I think at the end of the day, that’s something we will be proud of something that we are making here, in North Carolina, in Wilmington – tried and tested offshore in Wrightsville Beach.”