Lobster On A Roll In Port City 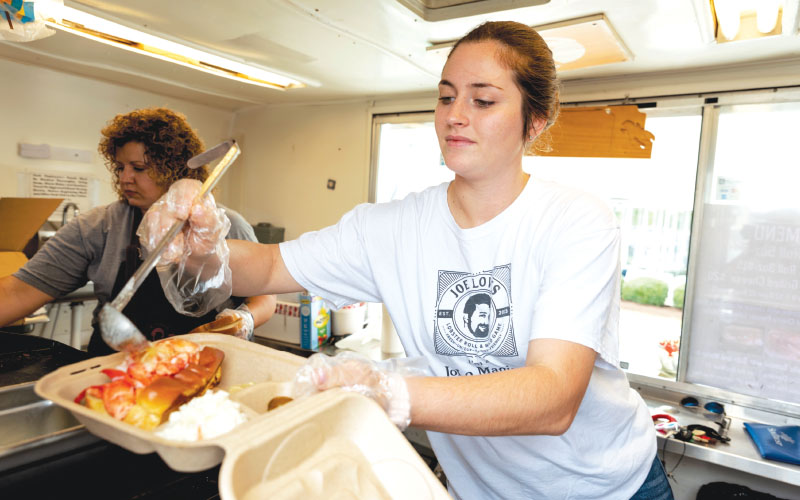 Cameo Herndon, daughter of Tony Herndon, owner of Joe Loves Lobster Rolls & Wild Game and its food truck, prepares a lobster roll for a customer at Jeff Gordon Chevrolet in Wilmington. (Photo by Michael Cline Spencer)
The restaurant world, much like teenage fashion and Top 40 radio, is amazingly susceptible to trends and changing customer expectations. Restaurateurs, as they say, must roll with it.

One recent trend has seen a New England tradition – the lobster roll – claw its way to a front-and-center spot in the Cape Fear region.

In September, co-owners David McLean and Dawn Berard debuted their lobster and shellfish-focused food truck, For the Shell of It. The truck’s core menu features hot and cold lobster rolls, whole Maine lobsters, lobster bisque and lobster mac n’ cheese. For the Shell of It began an every-Tuesday residency at Leaf & Barrel Provision Co. in Hampstead.

“You see what some places serve, and you want to share it with the rest of the world,” Berard said. “That was part of the drive.”

The lobster roll’s renaissance has even led to specialty brick-and-mortar stores setting up shop, including in and around the Port City.

Joe Loves Lobster Rolls & Wild Game first rolled into town in 2018, from its previous home in the Savannah/ Hilton Head/Bluffton area. Owner Tony Herndon, a career restaurateur who introduced his Joe Loves concept in 2013, opened a fixed-address location in Boiling Springs Lake this spring and has eyes toward franchising.

Bill and Monica Irwin, Maine natives who relocated to Wilmington seven years ago, will open The Maine Lobster Roll Company on Carolina Beach Road this fall. The menu will feature little other than authentic lobster rolls in an effort to introduce and popularize the New England specialty in their adopted hometown.

All three area lobster roll outposts agree that the main priority lies with the origin and quality of the roll’s star – the lobster.

“Our lobster meat is coming directly from Maine to us,” Irwin said. “We can source our lobster meat right down to the dock it comes in on and we know the area of the Atlantic where the lobsters are harvested. They’re harvested sustainably. It’s a good, high quality. I know where it’s coming from and what it is, which is very important to me.”


What is a lobster roll?


In the South, chefs and restaurant owners might have out-ofarea patrons ask, “What is a po’ boy?” Most Southerners know that the Louisiana-born sandwich is a baguette-style roll filled with fried seafood (usually shrimp or oysters), served with French fries or coleslaw as sides. It is widely believed that the name, “po’ boy,” originated during a New Orleans streetcar strike in the 1920s, when many “poor boy” striking workers would feast on the sandwiches. Louisiana’s unique accent and dialect did the rest and the term, “po’ boy,” was born.

The lobster roll could be thought of as New England’s po’ boy. It too gained popularity in the 1920s, and its use of the region’s readily available lobster meat suggests it originated as a means for working class people to grab a quick bite.

“It’s always been a tiny little bit of mayonnaise and warm lemon butter on top,” Herndon said. “Some people love to throw lettuce and vegetables and spices and seasonings and all of this crapola with it, and, that’s not what it is.”

Indeed, the driving force behind a good lobster roll is its spotlight on the lobster itself. But not unlike North Carolina’s generations-old east or west barbeqcue debate (correct answer: east) or Philly’s famed Pat’s or Geno’s cheesesteak wars (correct answer: Jim’s South Street), lobster roll aficionados face the dilemma of “Maine vs. Connecticut.”

“They’re both based on a nice, New England roll that’s not a regular hot dog roll, but that’s actually flat-sided, grilled with a lot of butter,” Berard said. “The Maine roll is very very simple. A cold roll with a mayo base. The other one is served where the lobster is hot and it comes with a dill lemon butter. It’s 99% lobster in both. That’s it. Neither one has any breads or fillers.

“People ask, ‘What one should we get? What’s your favorite?’ I’m partial to the hot one, and my partner is partial to the cold one. We even did a vote at one of our events and it was literally 51 percent of one and 49 percent of the other. So, we just decided that we’re always going to serve both.”


It can be difficult to pinpoint trends’ flashpoints, but with lobster rolls it would be tough to ignore Cousins Maine Lobster’s appearance on a 2012 episode of the hit ABC invest-i-tainment show, Shark Tank (coincidentally, the same episode that featured Wilmington-based business FreakerUSA). On the show, Los Angeles-based cousins Sabin Lomac and Jim Tselikis pitched their newly opened food truck business and received an investment from Shark Barbara Corcoran. The company now boasts 29 food trucks and 10 brick-and-mortar locations across the U.S.

With vendors opening across the country and the globe, the lobster’s roll appears to just be getting started.