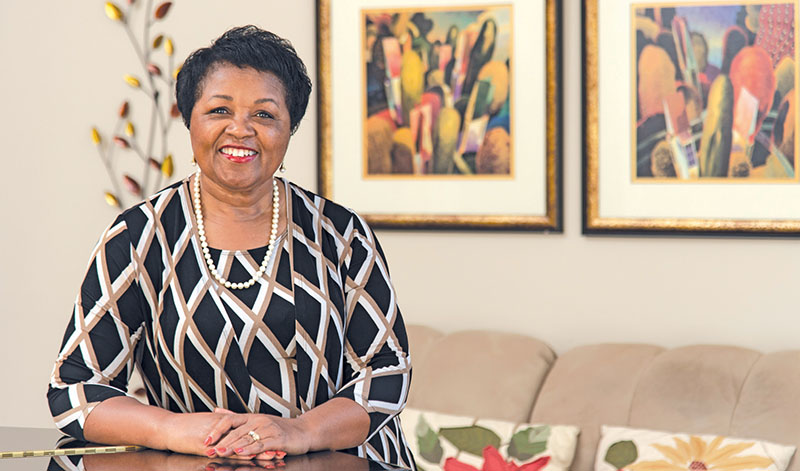 Janie Canty-Mitchell, founder of LeadersCare LLC, is working with organizations by drawing on her experience spanning more than four decades in health care and teaching. (Photo by Michael Cline Spencer)
In her more than 40 years in the health care and higher education fields, Janie Canty-Mitchell has accumulated a wealth of knowledge and leadership experience that she aims to pass on to others.

That’s why she came out of her short-lived retirement to start her own business.

After moving to Wilmington in 2016 with her husband to retire, Canty-Mitchell founded LeadersCare LLC. The leadership consulting and training firm has a mission to “partner with organizations to help develop and strengthen leaders in health care, higher education and nonprofit organizations.”

Her work with the firm is paired with her background at the University of North Carolina Wilmington, which she began in August, she said.

Canty-Mitchell said that in both roles she has utilized her background to help develop future leaders.

“I love working with different kinds of people and diverse groups, and so this gives me an opportunity to fulfill some of those desires that I have to continue to stay active, as well as giving back and doing something that’s significant that will enrich the lives of others,” Canty-Mitchell said. “And so, it’s an extension of who I am, I think, to do this work.”

Canty-Mitchell began the career path in the 1970s. “I’ve had a rich, rich history,” she said of her longtime career.

Originally from Sumter, South Carolina, Canty-Mitchell went to Lincoln Hospital School of Nursing in Durham. She obtained her license to practice nursing in 1971 and landed her first job in psychiatric nursing at Duke University Medical Center.

She was there for three years and found herself in her first leadership role as an assistant head nurse, Canty-Mitchell said.

Canty-Mitchell later moved to Florida, where she lived for about 20 years. There, she held various roles in nursing. She also earned a bachelor’s degree in nursing at Florida State University and obtained her master’s and Ph.D. in nursing from the University of Miami.

Canty-Mitchell was recruited to Indianapolis in the mid-1990s, where she remained for 10 years. She first started work as assistant professor at Indiana University School of Nursing and eventually rose to associate professor with tenure.

“That was really where I grew as an educator and also developed courses, mentored lots of students, led programs … it was leadership of students, people, committees [and] leadership in research projects,” Canty-Mitchell said. “I had an opportunity to grow substantially.”

After another stint in Florida working with the University of South Florida as an associate professor, Canty-Mitchell was recruited back to North Carolina, this time to Wilmington.

She began a job as a professor and associate dean of research and community partnerships at the UNCW’s School of Nursing in 2007. And in 2009, she became associate director of research and sponsored programs at the university. In that role, Canty-Mitchell led many projects and workshops, mentored 20 nursing faculty members and chaired a task force to develop a five-year strategic plan for the School of Nursing, she said.

“I loved that position because it gave me the opportunity to put all the things I had done together. The leadership in research and grants writing, and the other was in education and teaching. Leadership of a group of people who were engaged in research and also the community piece … to help develop leaders for the future that work with communities of different backgrounds.”

While at UNCW, she was one of 20 executive nurses selected for the national leadership development program Robert Wood Johnson Foundation Executive Nurse Fellows, geared toward impacting the national health care system.

That helped her in her final role before retirement as chair of the Department of Family and Community Health Systems in the School of Nursing at the University of Texas Health Science Center at San Antonio, leading a group of 70 faculty and staff.

She was also a full professor with tenure at retirement.

She ended her time at the Texas university in 2016. But even before making the move back to North Carolina, she started thinking about her next endeavor.

Canty-Mitchell said she developed an idea for a business plan and pursued it in 2017.
LeadersCare partners with private and not-for-profit, local and regional organizations that provide health and related services to diverse populations, she said.

And at UNCW, she has a part-time role teaching an online nursing education course on top of working with new faculty in the School of Nursing, coaching and training them on research projects and publications, she said.

For Canty-Mitchell, leadership is about understanding people and it is her belief that the highest level of leadership one can obtain is when they can share their wisdom to help grow and develop others, she said.

“I’ve seen where students have gone on to achieve great things. And other faculty that I have mentored have gone on to achieve great things … you don’t get the glory necessarily at that higher leadership level,” Canty-Mitchell said. “You want others to get the glory. And I think that’s what I want to accomplish in this latter stage of my life, is for other people to develop and get the glory and get the honors that they probably deserve, but maybe don’t know how to get there yet.”