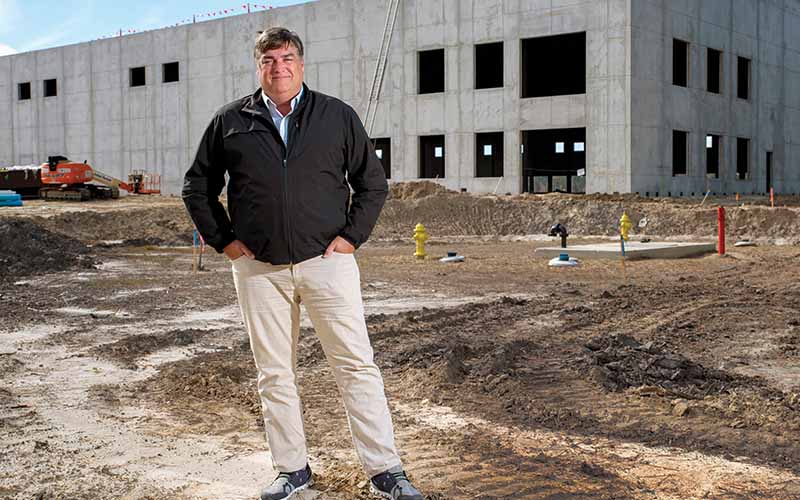 Statewide, business creations were up 55% between January and mid-September this year. As of Nov. 9, North Carolina has seen 157,000 new business filings, already beating last year’s then-record-breaking 127,000 total, according to N.C. Secretary of State spokesperson Tim Crowley.

“Economists are going to be looking at this for a long time because ... everybody was surprised at the COVID factor in this era of entrepreneurship,” Crowley said.

A majority of recent new filings were drafted by those “in search of new opportunities” as opposed to arising out of job loss, according to a Secretary of State survey. The survey showed that 22% of the new businesses employed three or more people.

Between state fiscal years 2020 and 2021, a band of steep filing activity occurred in the rural area sandwiched between Wilmington, Jacksonville and Fayetteville, state data shows. The state had not noticed any slowdowns in this trend as of November, according to Crowley.

Some rural counties in this region even hit the triple digits in their year-over-year filing activity growth rate (Scotland, Hoke, Sampson, Bladen), marking a surprising trend for counties categorized as Tier 1, the most economically distressed out of the N.C. Department of Commerce’s three-tier ranking system. Other Tier 1 rural counties with significant annual new filings growth in the region include Duplin (82%), Robeson (96%) and Columbus (68%).

New business filing growth in urban and suburban regions was strong too, at 41% in New Hanover County, 96% in Onslow (Jacksonville) and 115% in Cumberland County (Fayetteville).

“There’s no question there has been a lot of new small business startups in the southeast region,” said Steve Yost, president of North Carolina’s Southeast, an economic development agency serving 18 counties. “It’s gratifying to see the large numbers of creations in the rural counties.”

Yost credits the pandemic, a philosophical change by which people are seeking more control of their destinies, population growth, a strong business environment and amped up national spending expanding market potential as driving the business creation boon.

That includes “bigger projects with both higher levels of investment and new jobs across a variety of industries including manufacturing, food processing, pharmaceutical supply chain and construction materials,” Loyack wrote in an email. “This most likely reflects general trends in the economic recovery landscape, as companies ramp up production to meet market demand and focus on building back and re-shoring supply chains.”

Silicon Valley-based Precision Swiss Products is one of many new businesses adding to the rural filing rolls. The company announced in June it would relocate its California headquarters to the International Logistics Park on the Brunswick-Columbus County border. It chose the Brunswick County site over a shortlist of four other locations, with North Carolina beating South Carolina even though the neighboring state offered more in incentives, according to the Triangle Business Journal.

It was the first announced tenant of a long-dormant site, recently actualized by a speculative building project, just 18 miles from the Port of Wilmington fronting U.S. 74. The company will move into a new industrial shell spearheaded by Cameron Management, Jeff Earp and Windsor Commercial.

Creating microscopic metal and plastic parts used in the aerospace, medical, and semiconductor industries, the company’s average salary ($54,000) exceeds that of Brunswick ($40,000) and Columbus ($35,000) counties.

Industrial tenants make their moves based on costs and capabilities, employment availability, proximity to highways and ports, on-site infrastructure and market movement capability, according to Bryan Greene, a commercial real estate broker at Cameron Management.

“For example, a facility located on the outskirts of town with access to efficient roadways can operate more cost effectively than running at a location in-town requiring roadway usage … with high congestion,” Greene explained in an email. “Add in higher wage costs, lower manufacturing skilled labor, lack of affordable housing, and higher occupancy costs, and the decision to locate on the outskirts becomes more understandable.”

“We believe to conceive and deliver a megasite like this park – one of only seven in the state – that it is critical to speculate and plan prior to when demand arrives, because then it’s typically too late,” Greene said. “With that said, ILP’s location within and proximity to Columbus County, a historically rural county, allow us to offer incentives and advantages typical of a rural county, while also delivering the resources of being only 18 miles from the Port of Wilmington and I-40.”

Pandemic-induced supply chain disruptions are propping up manufacturing spin-off growth, according to Yost.

He cited two recent deals he helped usher in with the same pattern. In both cases, unrelated Italian companies set up roughly 11 miles outside of a major North Carolina manufacturer to shorten their distance supplying their key client with secondary products.

“I think we’re going to see more of that,” Yost said, adding he’s actively working on luring in several projects that fit the same profile.

Over the past year, nearly half of all companies that inquired with North Carolina's Southeast had a port requirement. “Having a port in the region is maybe, at this point in time, our number one [infrastructure] asset,” he said.

Roughly one in four inquiring companies this year needed rail access –– “That’s the highest it’s ever been,” Yost said. The needs are driven by companies looking to gain efficiencies, he said, potentially looking to get around a truck-driver shortage that is predicted to last. “Some of those companies are really reevaluating their supply chain networks,” he said.

Above all, workforce is the number one criteria any company is looking for, according to Yost. “If a company cannot get the workforce they need, we’re going to be eliminated from consideration,” he said.

Although the slowing growth rate of the state’s working-age population presents challenges for rural counties, the impact is buoyed by the region’s positive growth factors as a whole, Yost said, especially compared to stagnant states elsewhere. “Those demographic statistics are playing into our favor,” he said.

As Wilmington’s population has jumped, its employee base is becoming more skilled in white-collar trades, Greene said. This expanded skilled base paired with soaring coastal real estate values have exacerbated housing affordability.

“It stands to reason that distribution companies and manufacturers are looking for more strategic locations where they can improve their factors of production and lower their cost, while also being situated in a more competitive location relative to cost of living and quality of life for their employees,” Greene said.

Brandy Bynum Dawson, senior director of policy and advocacy at the NC Rural Center, said she can’t say for sure exactly what caused the rural filing surge. “[COVID-19] has led to opportunities for people to see what’s out there,” she said.

The numbers are "showing that there is a need, there's opportunity, and there's obviously interest in growing businesses – and particularly small businesses – across the state of North Carolina,” Dawson said.

It’s not clear the extent of the role increasing rural internet access has played in the bump. Crowley said the new ease of business startup, from traditionally brick-and-mortar to online, has likely contributed. “If you at last have adequate broadband – which is certainly a challenge in the rural areas, then that’s a place where people could look [to start businesses].”

Demand for installing a creative fiber-optic workaround has risen over the past two years, especially prompted by remote connection requirements of the pandemic, according to Carrie Shields, director of the Duplin County Economic Development Commission. The county has partnered with Eastern Carolina Broadband, a company that affixes transmitters to existing tall structures –– water towers, utility poles, even farmer’s grain bins –– as an alternative to installing endless miles of fiber cabling.

“It’s a new way of thinking for the way that we gain internet,” Shields said. “I can't run a 3-mile fiber line just to reach one resident. There's no return on investment there."

Access to the internet is a prerequisite for business activity, Shields said, even for hands-on operations one may assume can occur offline. “Tractors have more technology than you would even think,” Shields said.

The windfall could be a game-changer.