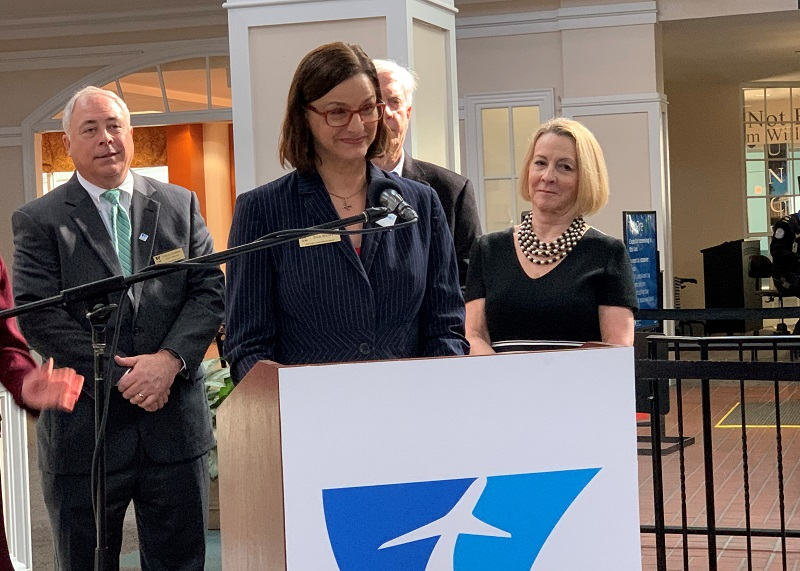 American will run the seasonal nonstop to Boston through Aug. 15.

The flight adds a new market to an already growing airport. The news of Boston was shared during an announcement about ILM reaching the 1 million-passengers mark.

ILM had a total of 1,075,963 passengers, counting arrivals and departures, at the airport last year, a 15% increase from the 934,058 passengers that traveled through ILM in 2018. The numbers are reported by ILM's three carriers, American, Delta Air Lines and United Airlines.

Airport officials attributed the recent passenger growth to larger aircraft servicing flights, which can accommodate more passengers, as well as an increase in the frequency of flights to and from ILM.

"One million is a big milestone for an airport of our size and a community of our size. It certainly justifies the terminal expansion that we're doing. It shows a confidence in the market. And our local traveling public, they continue to support flying from their local airport," Wilsey said.

The year 2019 marked the first full year of construction on its $60 million terminal expansion project, which is currently ongoing and will add room to service more flights and travelers when complete.

“While 2019 was a milestone year for us, our partners and the community, we know that 2020 will be just as bright,” Wilsey said.

Airlines determine their flight schedules based on a variety of factors, including aircraft availability, said Erin McNally, ILM's Marketing Specialist, in an email.

"American Airlines did inform us that they are operating on Saturday to accommodate high leisure demand on that particular day of the week," McNally said.

The flight will be served by a 76-seat aircraft with first class and coach seating, Wilsey said. Travelers can begin booking flights starting Jan. 18.

“We want to be the airline of choice to customers in Wilmington,” said Vasu Raja, American’s senior vice president of network strategy, in an email. “With a convenient schedule on Saturdays, we look forward to welcoming our Wilmington customers to Boston, and bringing Bostonians to Wilmington when the new service launches in May.”

Boston has been identified as ILM’s No. 2 underserved market, she said.

“Our business community and our tourism community both have asked for a Boston nonstop,” Wilsey said, adding that the airport has been going after a flight to the Boston market for years.

The flight is a test to see whether there is demand in the local market for a regular Boston flight, Wilsey said, similar to what American did for ILM’s Dallas-Fort Worth nonstop flight, which now runs two flights a day from Wilmington.

"So, it's important that we fill the aircraft from May until August," Wilsey said. “We're really pleased that American is giving us this opportunity.”

The new service at ILM was one of several other Boston nonstop announcements by American Airlines on Tuesday. The airline is running five flights a day from Raleigh to BOS, according to a post on Raleigh-Durham International Airport's Facebook page.