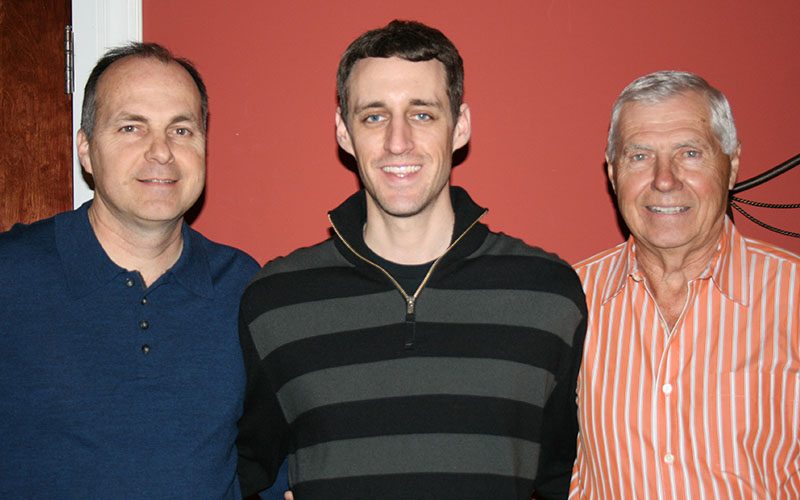 Tom McAndrew III, an Air Force veteran, manages Southport restaurant Bella Cucina. He is shown with his son, Jared, and his father, Tom McAndrew Jr. (Photo c/o Bella Cucina)
The Cape Fear area, in close proximity to a number of military bases, is home to many active and retired service members. As a result, veteran-owned businesses abound in Wilmington and nearby communities and can be found in the local hospitality industry.

A Taste of Sunrise Coffee House and Gathering Place is an inviting space in Hampstead run by Marine veteran Erich Fritz and his wife, Alexa. After Erich Fritz spent seven years in the Marines and retired from his career as a firefighter and medic, the Fritzes moved to Wilmington and the idea was born.

A Taste of Sunrise opened its doors in July and has connected with the community. A wide variety of coffees are available with specialty flavors that Erich Fritz makes himself, including vanilla, French toast and brown sugar apple, in addition to frappes, smoothies and baked goods, with vegan and gluten-free options.

Working with a local roaster in Holly Ridge, Java Estates, Erich Fritz hopes A Taste of Sunrise will one day become a vacation destination for those interested in learning about and enjoying the different varieties of coffee.

Huckbody trains all Battle House employees, many of whom are veterans themselves, in the same vein as the U.S. Army.

“The Army is good at training people, but not in a fun way. We take all that and make it fun,” Huckbody said.

Battle House is open Wednesday through Sunday and is located at 1817 Hall Drive in Wilmington. Every Friday, military members and first responders get a $10 discount.

At each brewery, guests get to sample the beer selections, tour the facilities to see how the beer is made and chat with brewers and baristas about the brewing process.

After more than 20 years in the aerospace industry, McAndrew changed gears and has been managing Bella Cucina since 2004.

“It was a big change for me. It was completely different,” McAndrew said.

“We use local purveyors of seafood and order produce from local vendors that comes fresh twice a week,” McAndrew said. “You have to start with good product. That is key.”

“It is pretty amazing what we do considering our extensive menu,” McAndrew said. “We use raw products and cook to order.”

Many of his staff have been working with McAndrew for 15 years. He credits his unique approach to maintaining his employees.

“I treat them different than a lot of others in the business do. I do like they do in the military. I give them the tools they need to empower them, and then I stand back and let them do their thing,” McAndrew said.

McAndrew credits his staff, including pizza chef Joel Wilcox and chef John Turner, with their ability to create and provide interesting new dishes.

“They take an idea and come up with something, and that’s the way the military works,” McAndrew said.

Bella Cucina is also a family-run business as McAndrew’s father owns the restaurant, he manages it, and his two sons often work as bartenders and pasta makers. Bella Cucina is open seven days a week and located at 5177 Southport-Supply Road SE, Unit A.