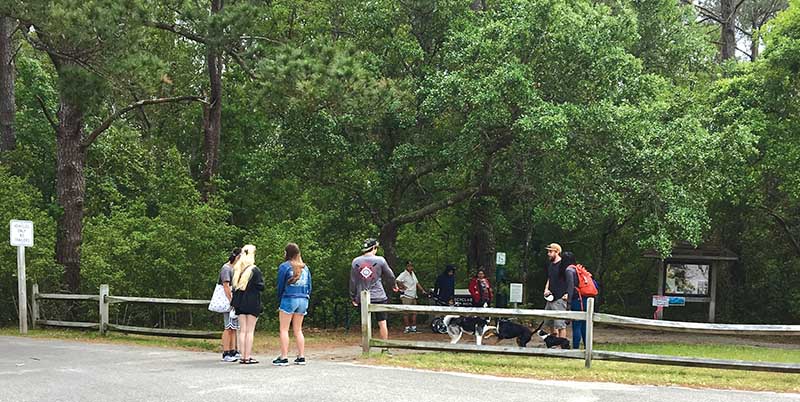 Carolina Beach State Park, whose popularity was growing before COVID-19 hit, saw droves of visitors coming by land and sea.

According to an N.C. Department of Natural and Cultural Resources news release, “State parks and rec­reation areas welcomed 19.8 million visitors last year – 400,000 more than any other year on record and 1.2 mil­lion more visitors than in 2019.”

Carolina Beach State Park set its own record at nearly 1.5 million visitors in 2020, compared to 890,000 the previous year. Although visitor numbers had been steadily increasing over the past few years, the numbers, like everything else in 2020, were unprecedented.

“During the time of the pan­demic, people have seen this as a destination,” Carolina Beach State Park ranger Chris Helms said. “With beaches closed and many recre­ational opportunities closed, many utilized the park as a way to get out of the house. We were only one of 12 state parks in North Carolina who remained open.”

Several parks experienced visi­tation increases in excess of 25% compared to 2019, including Caroli­na Beach (78%), Mayo River (92%), Raven Rock (32%) and Grandfather Mountain (32%). The month of December was the busiest December on record, with South Mountains up 98% for the month and William B. Umstead up 68%. Hammocks Beach welcomed 67% more visitors in December than the prior year, and Hanging Rock saw 57% more visitors.

Staying open amid a pandem­ic was not without its challenges. With increased visitation also came overflowing parking lots, litter on park grounds and damage to natural resources from heavier use of trails and popular sites.

For Helms, while more litter and people using the woods for a bath­room were a challenge, the safety of his staff was more of a concern.

“I’d be dishonest if I didn’t say that I was concerned for my staff, concerned for myself. In March, April, May, there were so many unknowns. There was not as much mask wearing at that time, and it was just fly by the seat of my pants,” Helms said. “But the positives out­weigh the negatives as people could use the park as a release, for mental health or averting things at home.”

According to the state Division of Parks and Recreation, visitors can help to reduce negative impacts in the parks by carrying a bag for their own litter; wearing a mask when they approach other visitors; staying on trails to avoid damaging natural re­sources; visiting less popular parks or less popular trails in parks; and visit­ing on weekdays or visiting earlier or later in the day to reduce crowding.

Helms said most people were good about keeping their distance as best as they could, and rangers also had to cope with new protocols.

“It is the ranger mentality to talk to folks and guide people and show them points of interest in the park, but all that had to change,” Helms said.

Park staff attribute the increased visitation not only to public rec­ognition that outdoor recreation promotes better health during the pandemic, but also to recently com­pleted Connect NC bond projects at parks across the state.

These projects include improved and expanded campground facilities, new trails and visitor centers and improved parking and access.

The 2016 bond allowed Caroli­na Beach State Park to complete a renovation of bathroom facilities and add two additional camper cabins to the 761 acres of park. One of the bathroom facility renovations is complete and the other is currently under construction, expected to open this spring.

Carolina Beach State Park’s campground was closed from mid-March to Memorial Day weekend, but people kept coming to visit the park for the day in cars and on bicycles, and that was one of the reasons park officials decided to keep the marina and boat ramp closed for an extended time.

“When boat ramps reopened, we made the decision to remain closed. Single car parking, pedestrians, bicycles were a big hit, and a ton of vehicle traffic continued to flow in, with only myself and two other rangers here for at least a month to keep the peace and keep people safe, so it was the right thing to do,” Helms explained.

Once the marina and campground reopened, the newest trend in recreation became clear. People had decided to invest in outdoor camping and boating equipment.

“It was an incredibly busy summer, and it became apparent that the sale of recreational equipment had gone crazy,” Helms said. “The park was still busy, and the marina got really busy with tons of brand new shiny boats and trailers. Our 54-slip marina has been full for a while now, and we have a waiting list of over 80 people.”

The campground was full with tent campers and pop-up campers, and new recreational vehicle owners took advantage of the park’s nine full-service sites. The state’s use of the online reservation service, Reserve America, helped “put us on the map,” according to Helms.

“Through December and January, we saw our camping numbers still up, busier than normal with tent camping and RV sites,” Helms said.

Helms and his team are excited about 2021.

“We look forward to the campground reopening fully with all 83 sites, and we are ready to help people enjoy it,” Helms said. “We are lucky that we get to work here in an awesome place, and we are going to keep doing what we’re doing, sharing it with our visitors.”