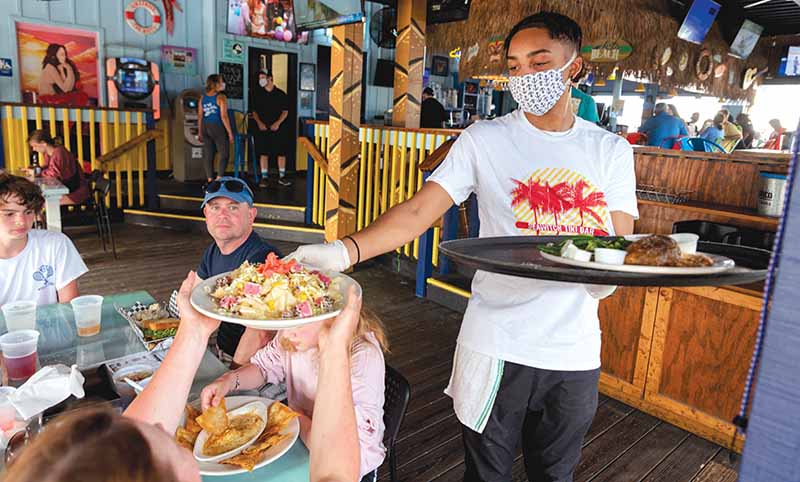 Jenni Gilewicz, who owns the SeaWitch with her husband, Alex Gilewicz, said the weekend leading up to Memorial Day on May 25 went more smoothly than anticipated at the restaurant, where the bar por­tion had to remain closed by state order because of novel coronavirus COVID-19 rules.

The Memorial Day weekend crowds were out in the area’s beach towns, including Wrightsville Beach, Kure Beach and Carolina Beach, for what is traditionally the kick-off to the busiest tourist months of the season.

But thanks to the coronavirus pan­demic, that doesn’t mean the results were the same. The local tourism industry is dealing with virus bag­gage that’s expected to be around for a long time.

“To practice safe social distancing, our sales were about a third of what they normally are,” Jenni Gilewicz said, “so it’s definitely still taking a hit. It’s better to be open at this capacity than nothing so we’ll take it. But it’s definitely different sales-wise.”


The better-than-nothing senti­ment describes the latest phase for many businesses that rely on tourism throughout the Cape Fear region as the state’s phased reopening contin­ues.

Hotels in North Carolina were allowed to open during the first phase that started May 8, but some local restrictions remained in place. Meanwhile the second phase, which started May 22, allowed restaurants to open for indoor dining at 50% capacity.

The proclamation temporarily eases current regulations and allows Carolina Beach restaurants the ability to use up to 25% of their parking area for outdoor customer dining.

The city of Wilmington is expected to consider an outdoor dining expansion for downtown restaurants, with the possibility of some street closures during busy times.

For businesses that provide lodging, including the area’s hotels and motels, the Friday before Memorial Day “was a little soft, but Saturday and Sunday they had a lot of walkins and last-minute reservations. … I think as a whole it was a good weekend for them,” said Kim Hufham, president and CEO of the New Hanover County Tourism Development Authority, which does business as the Wilmington and Beaches Convention and Visitors Bureau.

The more normal return to business for this time of year in the area did not come without hurdles, however, because limitations were still in place, including on pools and fitness centers, Hufham said. Another limitation for some hotels came from the city of Wilmington, which had only allowed 50% of a property’s total room capacity to be rented out to travelers.

The restrictions were lifted May 29.


A Matter of Time


While Memorial Day business helped the tourist industry, “essentially, we’ve lost a minimum of six to eight weeks … we’ve had eight to 10 weeks of pretty low occupancy” at hotels and motels in the area, Hufham said.

The CVB itself, which has a $3 million annual budget, is expected to be $1 million short in revenue because of the drop in room occupancy tax collections.

“That’s over a 30% loss. The best we can hope for is that we have a good summer and that we don’t start off the new year with that much of a shortfall,” Hufham said.

As of the end of May and beginning of June, it was too early to tell, Hufham said, with April’s ROT numbers not expected to be available until later in June.

“There’s still so many factors” that will come into play, said Connie Nelson, spokeswoman for the Wilmington and Beaches CVB.

“The other nights were almost full,” Bowles said.

He said he feels more optimistic about the future now than he did when his hotel was empty in March.

“Anxiety mixed with optimism. People are ready to get outside, and I think the beach is one of the safest places” because of the space and the sunshine, Bowles said.

But as of the end of May, business was steady.

“It’s not a normal summer of course,” Bowles said, “but who knows how things might go in July and August. It’s all up in the air.”


As the summer wears on, there may be some more bright spots for those who rely on tourism. According to a report May 27 by AirDNA, a website that aggregates data and tracks daily performance of shortterm rentals, vacation rental bookings were up 127% over the first week in February.

According to the report, “Markets rebounding the fastest are primarily leisure destinations in states pushing for a swift snap back to reality. Rentals near the beaches of Alabama, Georgia, Texas, and the Carolinas are the first to benefit from a travel- starved population.” 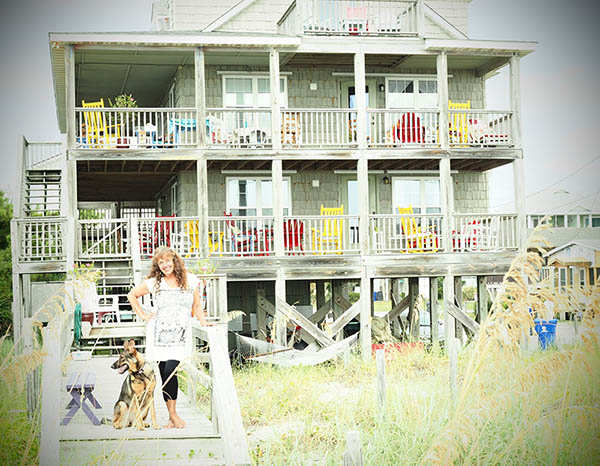 Consumers are watching indicators like that, too, along with other factors.

“The visitor confidence level is not there yet,” Hufham said in May. “The sentiment is still that they want to make sure that whatever destination they go to, whether it’s ours or somebody else’s, that they’re following the safety protocols.”

Visitors seem to be following CDC guidelines along the oceanfront in Carolina Beach on the weekends (including before Memorial Day), said Jeanette Nelson, a Carolina Beach resident and Airbnb hostess who rents out part of her home and a beach cottage on her property.

“I’ve noticed on Saturdays and Sundays it appears very crowded, but when you walk it [the beach], you see that the groups are definitely less than 10, and the groups are more than 6 feet apart,” she said. “People are respecting social distancing in where they park their chairs and umbrellas.”

Nelson, who has a doctorate from George Mason University in information technology and a master’s degree in finance and investment from George Washington University, pays close attention to her rental revenue numbers.

For the past five years, she’s seen good growth, she said, in those numbers, particularly from 2018 to 2019.

Nelson, who luckily has savings she can use, added, “We’ve lost a lot of money because of the coronavirus, but people are coming back.”