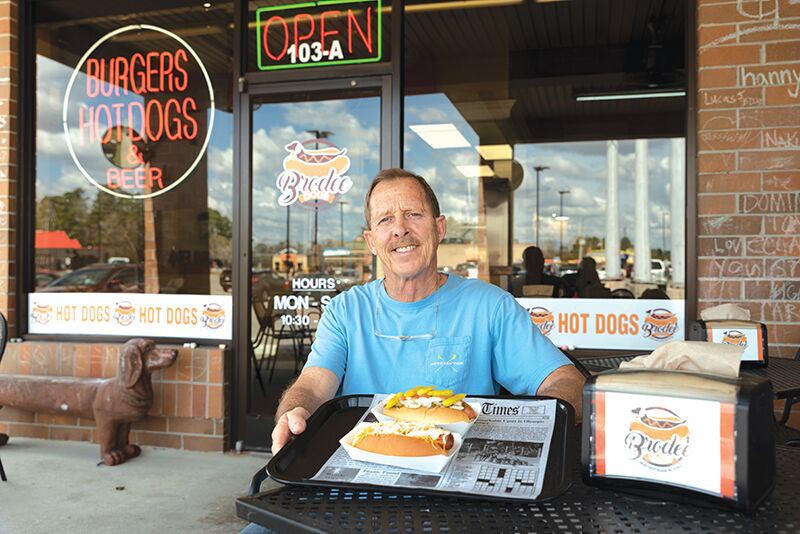 “I was looking around the parking lot at McDonald’s, Hardee’s, Taco Bell, KFC and Bojangles’,” Kent said. “So, I was like, ‘You know, nobody is serving hotdogs.’ The rent was cheap, so I thought, ‘Well, I’ll do hotdogs.’”

“I was just going to do something really simple,” Kent said. “Then, I talked to my wife about it, and she said, ‘Well, go ahead and make it look like a franchise, so, in case it gets really popular, if you want to do that, you already have the model set.’”

Kent and his wife, Cindy, along with other family members, went to work to make the idea of the restaurant a reality. As the work progressed one detail kept alluding them.

“We were trying figure what the name was,” Lee Kent said. “We were sitting around the house throwing names back and forth, and I had a little dachshund and his name was Brodee. My mom looked at me and said, ‘Well, you love your dog. He’s a hotdog dog. Why don’t you call it Brodee Dogs since he’s a wiener dog?’

Time-tested, the hot dog is an All-American tradition that has survived world wars, diet fads and weekend warrior chefs whose grills sizzle each summer. It can be a simple snack or a decadent delight.

“My wife’s dad, they had hot dogs every Friday night when she was growing up, and we call him Papa John, so we named one after him. We have a Leland dog. Of course, we have a hot dog named after Brodee. Our Italian sausage dog, we named the Cape Fear. We tried to stay with-in the range of using local names if we could.”

One of Brodee Dogs’ more popular offerings pays homage to some of its hometown clientele.

“The name of the ball team here at North Brunswick High School is the Scorpions, so we have a Scorpion dog,” Lee Kent said. “It’s a hot and spicy hot dog with jalapenos on it, so the name was fitting.”

And conscious of all potential clientele, there is a meatless hot dog offering as well.

Brodee Dogs’ specialty hot dogs are made with the well-known Sabrett all-beef franks, but Lee Kent did ultimately add a slightly lower-priced option.

“Sabrett is a good, quality hotdog,” he said. “It’s all beef, never frozen. We did end up putting in a less expensive hot dog, because kids don’t necessarily want to pay what a Sabrett hot dog might cost. We have some adults that buy them too, and that’s fine. I want all of the business. I don’t want to lose somebody over a dollar.”

The growth of Leland and surrounding Brunswick County plays a large role in Brodee Dogs’ sustainability. Lee Kent said that, about 18 years ago, a hotdog restaurant named Carolina Girls came and went, unable to stay afloat in the small town.

Now Leland has more population to support such an undertaking, but Lee Kent’s still-new business is not without its challenges.

“A lot of that for us is the size of the building,” he said. “We have around 25 seats outside,  but only 11 seats inside. So in the winter, we still do enough [business] to stay open, but the big draw is the summer, because people like to sit out under the porch. We have fans under there and cornhole boards and picnic tables, so we have a better opportunity in the summertime. It’s a really cool set-up, and it works really well for what it is.”

Along with its hot dog offerings and expected sides such as French fries, sweet potato fries and onion rings, Brodee Dogs serves fresh-ground hamburgers and some unique tastes all its own.

Brodee Dogs is far from Lee Kent’s first venture in Leland, the town he has called home for nearly a quarter of a century. For him, the restaurant business is not uncharted territory. He is 20 years removed from a 20-year career with Waffle House. But don’t expect to roll up to Brodee Dogs after a late night downtown.

“It was 24/7, and I was not going to open a restaurant that was open seven days a week, so I’m closed on Sundays,” he said. “I wasn’t going to be open any holidays, and I’m not.”

The quality of Brodee Dogs’ food offerings and its focus on family and fun keeps Lee Kent hopeful that franchising opportunities may lie ahead.

“I wanted something that a couple could go into for a reasonable amount of money, open it up and make a good living out of it,” he said. “I’ve proved the concept. It works. People like it. The food’s great, because we didn’t skimp on food. We don’t buy the cheapest stuff you can get.

“I’ve had a lot of interest. It does well with the amount of seating, and it’s done exactly what I thought it would do. I even had interest today. I had somebody that wanted to buy it.”