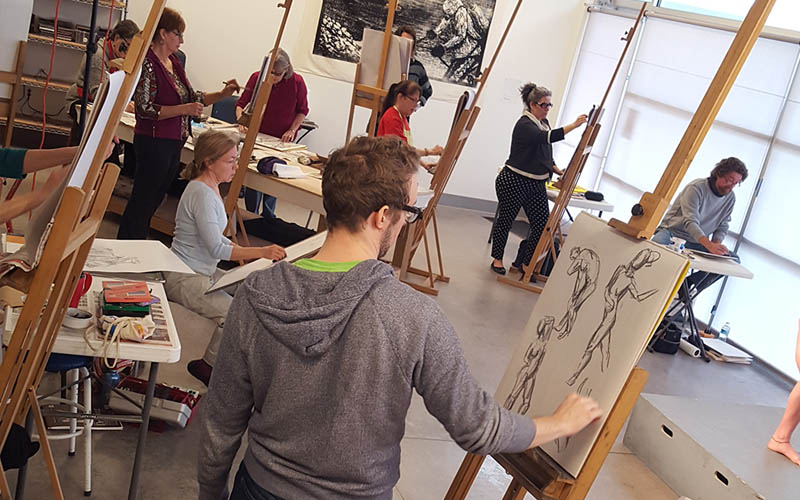 They include the overlooked legacy of the U.S. Colored Troops (USCT), whose Civil War service led to the fall of Confederates at the Battle of Forks Road, right at the location of the museum. A project on it is slated for October at the CAM.

The Wilmington United States Colored Troops Sculpture Project will be a bronze sculpture cast to raise awareness about the USCT from the Union who fought in the Civil War and led to the fall of Wilmington.

Stephen Hayes from Durham, a Brock Family Visiting Instructor in Studio Arts at Duke University, will cast the sculpture using the soldiers who perform for the battle re-enactments at the museum.

The creation will be on display on museum grounds, to honor the historic site and the legacy of the 1,600 African American soldiers, many from the Wilmington area, who fought and won this significant Civil War battle.

“There’s a lopsided story of the Confederacy, a one-sided story, and we want to tell the other side to promote social change,” said John McDonnell, the CAM’s director of development.

Another commemorative project in 2020 will include an exhibition to honor the 100-year anniversary of the 19th amendment, granting women in the U.S. the right to vote. Holly Trippman Fitzgerald is the curator of the exhibit, and although officials said they “have not finalized the life of it yet,” those interested are encouraged to keep an eye out for announcements about its unveiling.

Currently, the fifth annual “Illumination 2019” celebrates light with a unique community-wide winter tradition drawing inspiration from lantern festivals. Each year, CAM’s focus on light attracts several thousand participants “marking the transitional moment of the season’s change and year’s end, reflecting on the past while creating energy and hope for the future,” according to the museum’s website.

The event culminates with the Floating Lantern Ceremony from 2 to 7 p.m. Jan. 12. As a museum fundraiser, CAM sells the lanterns to the public, but there is no charge for attending.

Also going on now at the CAM is an exhibition of Isamu Noguchi, one of the 20th century’s most important and critically acclaimed sculptors.

“Unfolding Noguchi” is an exhibition that “provides insight into his genius and artistic exploration of form and material over his 60-year career,” according to the museum. “From bronze, granite, and aluminum to his paper and bamboo Akari light sculptures, Noguchi pushed the boundaries of what sculpture is and how it is integrated into daily life.” It will be on display until May 24.

At the height of the AIDS crisis in June 1987, a small group of friends set out to create a memorial to those lost to the deadly disease. As part of The Name Project - AIDS Memorial Quilt, they helped to create more than 48,000 memorial panels to commemorate those lives and serve as a powerful visual reminder of the AIDS pandemic.

The CAM is a participating venue of The Name Project, displaying 20 blocks of the AIDS Memorial Quilt on exhibit through Feb. 16. The Frank Harr Foundation of Wilmington, which serves the LGBTQ population and helps to educate the community at large on LGBTQ inclusiveness, helped to bring the quilt here to increase awareness and educate the public on this ongoing health crisis.

Speaking of educating, the CAM has dozens of classes ranging from knitting to painting for kids and adults alike. There are camps during the summer and holidays, as well as after-school classes.

“Art makes the world a better place, and we want to break that stigma around art that it’s this hoity-toity thing,” McDonnell said. “Art is for everyone, and we have something for everyone at the CAM.”

For example, Thursdays are the night to join other jazz lovers for Jazz @ the CAM, a concert series by the CAM and the Cape Fear Jazz Society.

In its 10th season, the eight-concert series offers music from local musicians and those visiting from around the state to perform a variety of jazz genres. The CAM Cafe, the CAM’s in-house restaurant, is available for dinner before or after the show. In addition, the CAM is available for birthday parties for kids as well as large events and weddings.

Original works of art by Pablo Picasso, Roy Lichtenstein and David Hockney all call Wilmington home at the museum. As part of a gift from the Louis Belden collection to the CAM, these and many more unique and precious works of art are now a part of the permanent museum collection and are currently on view until April 26.

The CAM is also home to original works by Mary Cassatt, in addition to local artists Claude Howell and Minnie Evans, among others.

“We are a huge, dynamic place with a lot going on, and our No. 1 goal is to serve as an asset to the community,” McDonnell said. “Our arts and cultural scene is a major source of growth delivering cultural enlightenment to the community.”