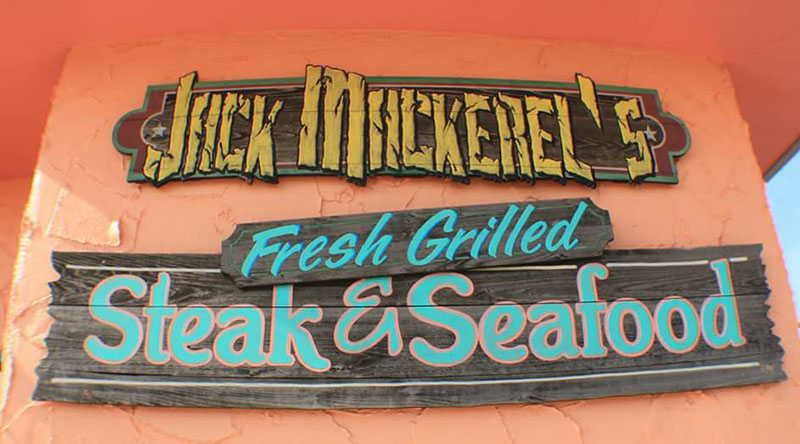 Beach town restaurants, including Jack Mackerel's Island Grill in Kure Beach, come up with strategies to draw more customers when the tourists have all gone home. (Photo c/o Jack Mackerel's)
Once again, summer’s high travel season is in the rearview, but that doesn’t mean beach businesses shutter.

Thanks to moderate temperatures, lower lodging rates and the like, fall is a shoulder season for vacationing at area beaches. Therefore, many businesses that boom in the summer are able to weather the slower seasons, even through the winter.

One such spot in Pleasure Island is Jack Mackerel’s Island Grill, 113 K Ave., near the Kure Beach Pier. Regularly running on an hourplus wait for a table in the summer months, the Caribbean-esque restaurant keeps rolling after the peak-season crowds are gone.

“We have shoulder seasons; spring and fall are actually pretty decent, [but] nothing compares to what we do in summer – the numbers we do in the summer time are ridiculous. We’re almost too busy,” quipped Jack Mackerel’s chef Danny Rose.

While the post-Labor Day holiday drop in business is expected each year, its impact can be drastic on businesses, especially restaurants that rely on tourists.

For example, fewer customers regularly coming in means fewer employees are needed to staff the restaurant during each shift. It’s a common practice used by seasonally affected businesses.

“We have a major staff cut that happens, whereas in the summertime people are getting overtime every week, [and after Labor Day] they may get 20 to 30 hours tops,” said Rose. “It’s expected though.”

Like other related island businesses, daily specials are often added to bring in more customers.

Rose likens it to a “local’s appreciation” movement.

However, it’s one of the restaurant’s year-round specials that’s proven to bring in the dinner crowd.

“We do different specials each day, except Friday and Saturday,” she said. “This is the first year we’ve done a Thursday night Blue Plate Special.”

Meanwhile, Rose also capitalizes on seasonal game-day opportunities to increase slowing sales. Food and drink specials are key at many a pigskin- watching establishment to draw customers, so it was a no brainer to add them, he said.

“We started last football season doing some Sunday tailgate specials, for example a selection of small plates that are $6.99, wing specials, and those types of things,” Rose said. “That’s been doing well, and we can control our costs, though there’s only so much you’ll make with that because we’ll only put out quality product.”

Similarly, Carolina Beach’s Lazy Pirate Island Sports Grill ramps up its promotional specials post-summer too. The establishment has been a fixture at 701 N. Lake Park Blvd. for 10 years.

“As the summer crowds make their exit, we really try to stay as busy as possible to keep our staff employed above all else,” said Lazy Pirate co-owner Jamie Aiken. “That usually means having more aggressive daily specials and promoting them just as aggressively.”

An interactive restaurant, the Lazy Pirate also has outdoor volleyball courts, cornhole boards and other games available. Plus, football season’s timing is ideal for increasing business once the summer crowds wane.

“Our business is rooted in sports fandom and playing games,” said Aiken. “We have worked hard to improve our venue and its offerings for sports fans to come together and watch their favorite teams in a passionate environment.”