Museum Bounces Back After Flo Repairs 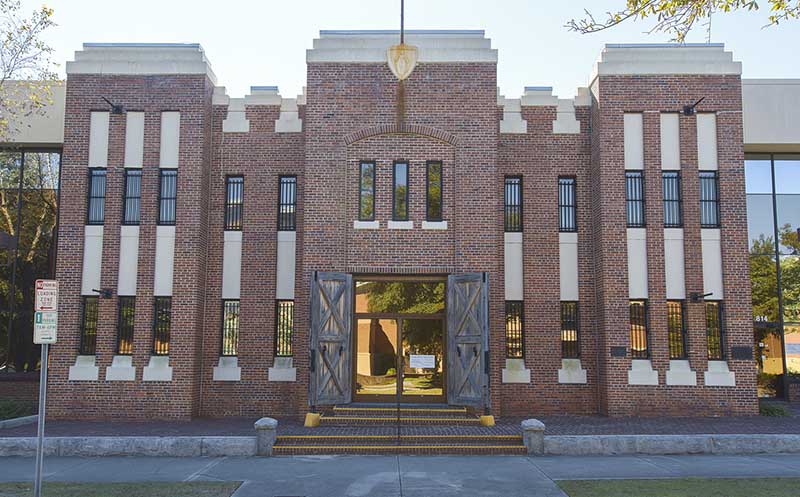 The final phase of repairs wrapped this month, following a two-week temporary closure. Flo first shuttered the museum for more than a month after making landfall Sept. 14, 2018, near Wrightsville Beach.

Although the museum is back on track, officials said the storm’s impact has been a lengthy one, beginning before the storm hit the Cape Fear coast.

“The biggest impact … is that we were closed from [last] Sept. 11 through Oct. 18 while remediation and clean-up efforts took place due to water intrusion,” said museum director Sheryl Mays.

Following the storm, some areas and museum exhibits remained closed to the public. A roof leak caused water damage to the building’s second floor, but the artifacts in the gallery’s damaged cases remained intact.

“Our second-floor gallery was still closed while repairs were taking place,” Mays said.

It took until this summer (June 27) for the building’s second floor to reopen. While it was welcome news, issues in the immediate aftermath of Flo couldn’t be fixed.

“A good part of the museum was closed for approximately nine months so our visitors were only able to see about half of our exhibits,” Mays said. “[What’s more,] we typically have a very full fall field trip schedule for schools in New Hanover as well as neighboring counties. Schools were out for an extended period of time and most canceled fall field trips to make up for lost instructional time in the classroom.”

As for the Cape Fear Museum’s repair bills thanks to the hurricane, they’ve been pricey.

All of the work at the museum for restoration, repair and contents replacement that has been done over the past year and most recently done over the two weeks the museum was closed was estimated to cost about $305,000, Mays said.

But there’s been an upside to all of Flo’s inconvenience. Areas of the museum have been reimagined, and there’s two new exhibits to view.

“Dinosaur Discovery is a traveling exhibit that will be here through February 2020,” Mays explained. “As the space was rebuilt, a large part of it was redesigned to allow the museum to select traveling exhibits to feature over the next couple of years.”

She added that the other exhibition, 20th Century Gallery, is part of the museum’s core history exhibit.

Meanwhile, overall attendance didn’t fall as much as may have been expected. While half of the museum was closed or under repairs, said Mays, admission was free through the end of June, which likely helped boost the attraction’s visitor numbers.

“Overall attendance for fiscal year 18-19 was about the same as the previous year – 53,000 visitors as compared to 55, 000 in fiscal year 17-18,” she said. “Considering we were closed for over a month after the storm, we are pleased with those figures.”

“Upon reopening our upstairs gallery space and the addition of our newest exhibits, July 2019 was a fabulous month, and we saw a 20% increase in attendance as compared to last year,” Mays said.

With Flo’s repairs in the rearview mirror, the museum can focus on what’s next. Museum staff are readying to launch a new history exhibit later this fall, featuring some familiar childhood faces.

A traveling exhibit from the Charles M. Schulz Museum, “To the Moon: Snoopy Soars with NASA,” is scheduled to open Nov. 16.

“The exhibition examines the history of Apollo 10 and the Peanuts characters’ role in that flight and in the NASA Manned Flight Awareness safety program,” said Mays. “Our team is currently designing several interactive activities to complement the exhibit and make it both fun and educational for our visitors.”

The museum is hosting a free admission day Sept. 21. Free passes can be downloaded at capefearmuseum. com/programs/smithsonian-magazine- museum-day.

The Cape Fear Museum is open Tuesday through Saturday from 9 a.m. to 5 p.m, and Sunday 1 p.m. to 5 p.m. The museum is closed on Mondays from Labor Day to Memorial Day.