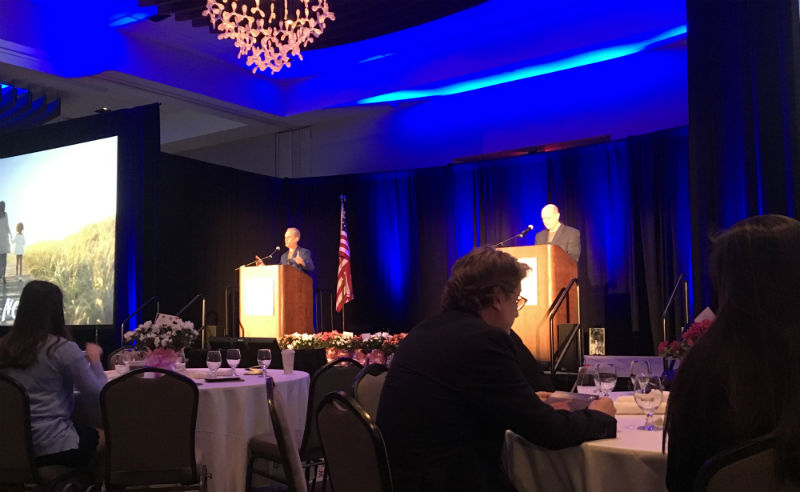 Wit Tuttell (left) and Mark Shore (right) presented updates on Visit NC's tourism marketing strategy at the Visit NC 365 Conference Tuesday. (Photo by Johanna Cano)
The Wilmington region will continue to be one of the top 10 tourist destinations in the state despite Hurricane Florence, said Wit Tuttell, director of Visit North Carolina, during the Visit NC 365 Conference Tuesday in Wilmington.

“We started doing research every two months, we polled visitors nationwide and asked them about it and we saw that at first there was a bigger awareness of the storm and thoughts that there was a lot of damage around, which was somewhat accurate,” Tuttell said. “What we’ve seen is the awareness and the thought of Wilmington as a place that has a lot of damage has really dropped down. Now we are pretty comfortable that this spring and summer we can go out and just really promote the positive stuff.”

The three-day conference was hosted by Visit NC, which is part of the Economic Development Partnership of North Carolina.

“Revenue from visitor spending means more than a billion in state and local taxes and supports more than 225,000 jobs,” Tuttell said during the update. “One in every 11 jobs in this state is related to tourism. We are the economic engine for the state.”

Some of that constant increase in North Carolina tourism is due to Visit NC’s marketing campaigns, Shore said.

“Over the last two years, we're looking at an arrival lift of nearly 40 percent, indicating that those who saw our online messaging visit at 1.4 times more the rate of those who don't see our advertising,” Shore said. “So basically, for every hundred visitors that come to North Carolina, 29 of them came because they saw our marketing.”

In 2018, NC Visit launched its “Firsts that Last” campaign, where it captured the experiences of real first-time North Carolina visitors in an effort to attract first-time tourists to the state.

Officials with NC Visit plan on using unseen footage from that campaign and editing it into advertising videos, including a six-second non-skippable ad on YouTube and GIFs that can be shared on social media.

“We're tapping into the incredible wealth of footage and assets that we have from filming those 'Firsts that Last' trips,” Shore said.

One aspect of Wilmington that attracts tourists is the film industry, which has been doing better this year, Tuttell said.

“It’s a great story to tell, as it turns out, in the first three months of this year, we already have more dollars committed to filming in North Carolina than in the past two years combined,” Tuttell said.

In 2017, there was a $57 million spending impact for filming projects in the Wilmington region and $55 million in 2018. As of March of this year, the spending impact is $113 million, according to data from FilmNC.

Film is just one Wilmington feature that puts the city on the map, said Kim Hufham, president and CEO of Wilmington and Beaches Convention & Visitors Bureau.

Wilmington summer tourism is looking up so far, according to property owners and hotel officials, said Hufham.

As tourists come to Wilmington this summer, one issue they might come across is finding a place to stay, considering there is high occupancy and lower supply, said Tuttell.

“We think it’s going to be another record-setting year in North Carolina, especially for the southeast of North Carolina. Occupancy is really off the charts for commercial lodging; the problem is supply is lower because we are still about 10 percent down on supply due to places being renovated and still being brought back to tip-top shape from the storm,” Tuttell said. “I think you are going to have a battle where there are fewer properties, but their rate is higher. I still think it will be a solid year.”

Besides monetarily contributing to the state in tourism, the Wilmington region also provides diversity.

“It contributes to the uniqueness of the state because of the destination here: the film, history and the Battleship. We are always trying to find things that are different and unique,” Tuttell said.