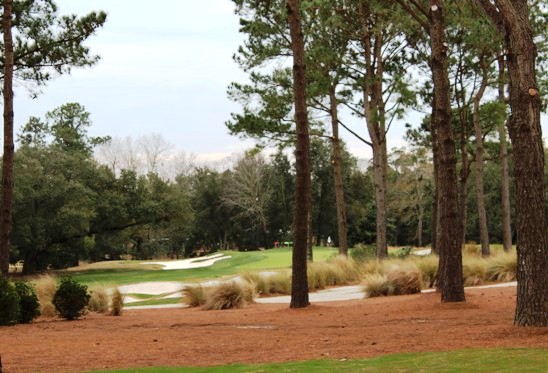 Eagle Point Golf Club is quiet in January, but in May tens of thousands of golf fans will be here for the Wells Fargo Championship. (Photo by Vince Winkel)
Corporate sponsors of the Wells Fargo Championship on Wednesday descended on Eagle Point Golf Club to chat with tournament staff and sample menu items for what will be one of the biggest sporting events ever held in Wilmington.

“We have been overwhelmed with the warm welcome that we have had,” said Jan Ivey, marketing director for the Wells Fargo Championship. “The people here have reached out and embraced the event. I think they know how important it is going to be to the community.”

Ivey said corporate sponsor sales have been strong, as have the sale of the costlier hospitality suite chalets. There are 60 such chalets available to corporate sponsors, and at least 50 have already been sold.

Area financial, medical, construction and real estate firms are just some of the businesses that have snatched up these on-course venues for relationship building, said a Wells Fargo spokesperson.

The tournament is May 1-7, and with up to 30,000 tournament tickets available each day it has a projected economic impact of between $40 million and $60 million for the Wilmington area, according to the PGA Tour.

“We’re about 100 days out, which is always sort of a milestone,” said Kym Hougham, executive director of the Wells Fargo Championship. “The support has been amazing, both the corporate support and the public support here. Tickets are selling quickly, which is pretty unusual this far out.”

Hougham said tying an event like this into economic development efforts for the region is a great idea no matter how you look at it.

“Just our television alone, is going nationally and then 223 countries have access to the television coverage. Those blimp shots coming on CBS, will be seen all around the world,” he said.

All that coverage is important enough that the Wilmington Chamber of Commerce is spearheading an effort with area economic developers from four counties, to develop a regional economic development marketing initiative tied to the tournament.

“Those regional groups are coming together in a large spirit of cooperation and learning what they do from a community standpoint,” Ivey said. “Give credit to the county and city leadership from this area, that they recognize the fact that they want to take advantage from an economic impact as well as in tourism.”

On Tuesday night, chamber leaders and the convention and visitors bureau officials presented an overview of the planned marketing initiative to the Wilmington City Council. The presentation by chamber chairman Charlie Mattox, chamber interim CEO Dick Blouse and Albert Eckel of the communications firm Eckel & Vaughan, gave a general overview of what is being planned. The trio highlighted the need for a brand messaging campaign, media relations and the need for a print and digital ad campaign. More specific details are still in the planning stages.

"This really puts Wilmington in the spotlight,” Blouse said. “We think that this is a great opportunity to tell the world that this is a great place to do business. It’s a good place to bring your company to, so what we’re trying to do is put together a marketing program so we can tell the world all the great assets that are here in Wilmington and hopefully this helps drive business to the economic development organizations that are out there trying to bring new investment to the community.”

The full marketing plan, which is being put together by Eckel & Vaughan of Raleigh, is expected to be finalized within a few weeks.