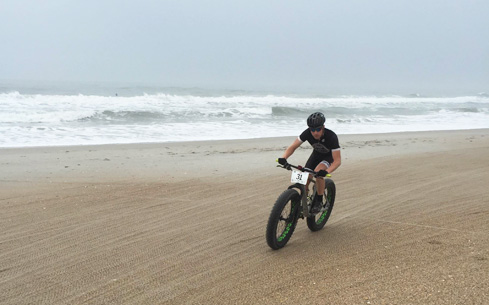 The U.S. Open Fat Bike Beach Championship in March was one of several new sports events added to the area's tourism calendar this year. (Photo courtesy of Shawn Spencer))
Wilmington and Beaches Convention and Visitors Bureau is promoting new sporting events and active travel to bring more visitors to the area.

“Sports travel is one the fastest growing sectors of travel and tourism,” said Connie Nelson, spokeswoman for the Convention and Visitors Bureau (CVB). “Youth sports, professional and semi-professional sporting events continue to be a huge draw for visitors to the area, and the CVB plans to continue to promote Wilmington as a sports and active vacation destination.”

“The CVB is very active and engaged right now in not only promoting sports events, but also trying to increase sports travel and bring more types of events to the area,” Nelson said.

Some of the area’s most popular sporting events are the youth soccer tournaments that take place twice a year. The Seaside Soccer Classic in May brings thousands of youth soccer players and their parents to the area as does the fall Beach Soccer Classic.

“Those are our biggest spectator sports,” Nelson said. “Youth sports, in particular, is growing by leaps and bounds.”

Other large sporting events in area include the Susan G. Komen Race for the Cure, which took place in March, as well as the Quintiles Wrightsville Beach half and full marathon and the PPD Beach 2 Battleship half and full iron distance triathlon.

Some new sporting events for the area this year include the American Tailgating League Tailgating Game Championships, which was held at the Coastline Conference and Event Center in January, the U.S. Open Beach Fat Bike Championships in March and the EVP Beach Volleyball Tour that stops in Carolina Beach in August. The beach volleyball event is expected to draw about 500 spectators and 200 volleyball athletes from the United States and the U.K.

The trend of active travel is another growing sector of the travel and tourism industry and includes individuals traveling to locales to be active or to participate in a sporting event.

“Our destination is really well-positioned for both of these things because, in recent years, the city and county have expanded or built new sports facilities and parks, and they continue to make our destination a pedestrian and cycling-friendly community,” Nelson said. “That’s something that is important to our residents, but it’s also something travelers are interested in.”

The City of Wilmington increased multi-use pathways in recent years. The Gary Shell Cross-City Trail, which is scheduled to be completed by the end of the year, connects several parks in Wilmington and will be part of the East Coast Greenway, a multi-use path that will run from Maine to Florida.
According to Amy Beatty, superintendent of recreation and downtown services for the City of Wilmington, the final section of the Riverwalk, another one of Wilmington’s popular pathways, is expected to be completed this spring. The new section will connect Governors Landing to the Isabel Holmes Bridge, making the Riverwalk a “bridge-to-bridge” pathway.

The city also added to its sports facilities in the past few years with the expansion of the Empie Park
tennis courts, the addition of the Cape Fear Regional Soccer Park and the opening of Olsen Park with its softball fields and unique ADA-approved Miracle Field.

Stand-up paddleboarding (SUP) and surfing continue to be a growing active travel activity for the Wilmington area with multiple surf and SUP competitions held locally each year.

According to Nelson, there has also been an increase in the number of surf and paddleboard camps in recent years with SUP specifically being a major new sports trend.

This year, the SUPcompetition will be part of the Wrightsville Beach Museum of History’s annual Waterman Ocean Festival that takes place April 18-19.