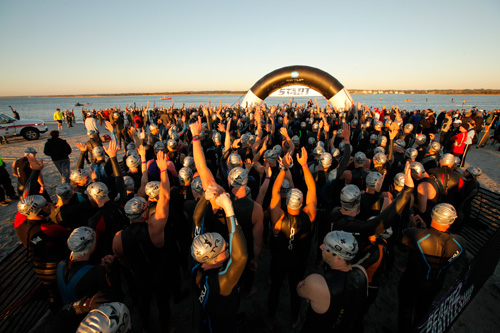 If you’ve ever listened to the first impressions of visitors to Wrightsville Beach, one of the first things they’ll notice is the number of runners and walkers along the perimeter of town.

“Everybody knows about The Loop,” said Kim Hufham, head of the Wilmington and Beaches Convention and Visitors Bureau and president/CEO of the New Hanover County Tourism Development Authority. “It’s one of the first things you see when you cross the bridge.”

But the area’s active offerings don’t stop there, especially during the fall. This time of year – with its thinner crowds, cooler weather and off-season lodging rates – offers even more opportunity for participation in fitness events and activities.

“Come here and be healthy,” Hufham said. “We’re a great year-round destination. You can’t imagine doing sports activities other than skiing in the mountains during the colder months, but our weather is very nice, and I think that’s why we’re so attractive to do these types of activities in the fall.”

For starters, southeastern North Carolina is hosting competitive amateur events – from tennis championships to fishing tournaments – almost every weekend from September to November.

One of the biggest was the 5th annual PPD Beach2Battleship Iron Distance Triathlon on Oct. 20, which brought about 2,000 athletes, along with their friends, family and trainers to the area. Figures provided by the CVB put the Beach2Battleship’s total economic impact at an estimated $3.9 million, with a direct spending figure of about $1.5 million. Those figures are based on the predicted number of people who travel to the area to compete in the event, the average size of their party and the number of days they stay.

Another was Cycle North Carolina’s 14th annual Mountains to the Coast Bike Tour, which ended Oct. 6 in Carolina Beach. About 1,000 amateur cyclists from the U.S. and beyond participated in the event that began Sept. 29 in Brevard. Bicyclists wheeled into the finish line near the beach town’s boardwalk and congregated in the area for a celebration.

Some local businesses reported a small boost but not as much as expected due to free food and alcohol provided by the organizers. But the area’s exposure to visitors who had never been to the beach town before was a payoff not to be ignored, said Dava Villapiano, owner of Silver Dollar in Carolina Beach.

“Anything that’s happening in the area helps,” she said.

For those who aren’t quite so competitive, local tourism officials are playing up the area’s other active attributes, such as walking and bike trails, parks and recreation areas, and of course, the beaches that offer the venue for swimming, surfing, fishing, kayaking and more.

“All those lend themselves to activity,” Hufham said. “Our area has always had a great base, but now we are putting additional emphasis on sports and sports-related activities, especially on the amateur sports.”

Outside magazine included Wilmington, which is a N.C. Fit Community, among its Best Towns.

Participation in wildlife-associated recreation increased in 28 states since 2006, according to the findings of the 2011 National Survey of Fishing, Hunting and Wildlife-Associated Recreation State Overview Report released by the U.S. Fish and Wildlife Service last month. Although North Carolina wasn’t among them, spending on these activities in the Tar Heel State has spiked significantly during the past five years.

The State Overview Report is the second in a series of reports to be released by the agency in the next few months highlighting results from the national survey. Conducted since 1955, the survey measures participation in these activities and related spending on equipment and trips across the nation and in individual states. The 2011 survey showed that U.S. hunters, anglers and wildlife watchers spent $145 billion last year on related gear, trips and other purchases such as licenses, tags and land leasing or ownership.

Overall, the 2011 survey found that 38 percent of all Americans 16 years of age and older participated in wildlife-related recreation in 2011, an increase of 2.6 million participants from the previous survey in 2006. Participation in recreational fishing increased by 11 percent, and hunting was up 9 percent. This increase reverses a trend over previous surveys showing a 10 percent decline in hunting participation between 1996 and 2006.

In North Carolina, hunters, anglers and wildlife watchers in 2011 spent a total of $3.3 billion, nearly all of it on trip-related costs such as gas, food and lodging. In 2006, state wildlife recreational spending totaled $2.2 billion, but less than half paid for travel expenses, with the rest for equipment.

Despite the jump in spending, however, participation in wildlife-associated recreation in the Tar Heel State is slightly down to 37 percent in 2011 from 41 percent in 2006.

The survey is being released in phases – the first report was issued in August and presented data for the nation as a whole. The final national report will be available in November, and the detailed state reports will be issued on a flow basis beginning in December.