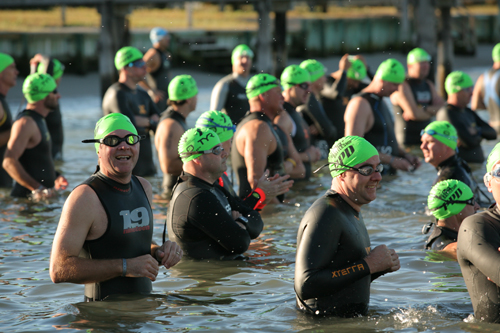 This year’s PPD “Heros” are among 2,000 people registered for Saturday’s PPD Beach2Battleship Triathlon. The six were given PPD Hero Awards on Thursday at the company’s annual race kickoff event. At the ceremony, the six shared their stories about the importance of clinical trials to their treatment.

Both Emily Schaller and Katie Reisinger were diagnosed with cystic fibrosis as infants and said they have maintained active lives as a result of participation in clinical trials. They have also seen the average life expectancy for CF patients increase significantly as a result of new drugs – developed through clinical trials – to treat the disease.

Willie Vasser Jr. was diagnosed with leukemia in 2004 but, thanks to his participation in a clinical trial early-on, his disease has been in remission since 2005. Unfortunately, there was no corresponding clinical trial for Vasser’s son, who has since died of a more aggressive form of leukemia.

A clinical trial significantly increased Eric Miller’s chances of survival after he had brain surgery to remove a tumor in 2000, when he was 6. He had intensive radiation therapy and chemotherapy afterward and had to learn to walk and talk again. He and his father, Garrett, participate in triathlons together.

Mary Kreis discovered she was pregnant and learned she had melanoma at about the same time about eight years ago. She said that thanks to what they had learned through clinical trials, her surgeons knew how to operate with minimal risk to the baby, who is now a healthy second-grader.

Birgit Arb, an oncologist with Cape Fear Cancer Specialists in Wilmington, is very involved with clinical trials that help her provide care to her patients from diagnosis through treatment.

More than 2,000 participants from 45 states and 12 countries are expected at this year’s race, up from 1875 participants from 43 states and five countries in the 2011 event. The iron distance race begins with a 2.4-mile swim, continues with a 112-mile bike ride and concludes with a 26.2-mile run. The race starts in Wrightsville Beach, winds through New Hanover, Pender, Sampson and Bladen counties and ends in downtown Wilmington.

A half-triathlon course is also available.

Spending by participants and their friends and family generates a regional economic impact estimated at about $4 million. Wilmington-based Set Up Events produces the race, and funds raised benefit the Wilmington Family YMCA, which uses the money to support such community programs as Girls on the Run and LIVESTRONG at the YMCA.

Traffic delays are likely on race day, officials warn. One probable bottleneck will be around the intersection of Highway 17 and Porters Neck Road from 7:30-10 a.m. Another area of major congestion will be the Isabel Holmes Bridge. Motorists traveling from Wilmington to Brunswick County from 10 a.m. to 6 p.m. are advised to use the Cape Fear Memorial Bridge and avoid Highway 421.