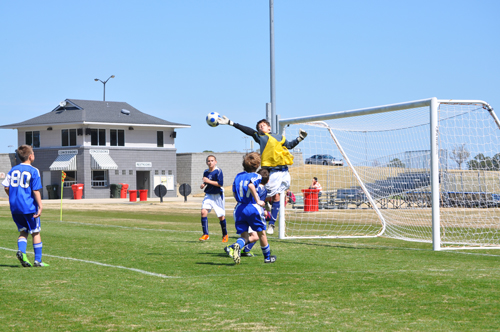 Throughout the year, the area hosts a variety of races, fishing tournaments, paddleboard competitions and team sport events.

From January’s Cold Stroke Classic that attracts dozens of paddleboarders to October’s PPD Beach2Battleship triathlon that registers nearly 2,000 participants, these events introduce the Wilmington area to folks from all over the country and provide a boost to the local economy.

Local officials and tourism professionals have taken note as the size and scope of sports tourism has grown in the region. They also are taking steps to increase sports tourism.

“We are implementing a much more aggressive marketing program,” said Kim Hufham, head of the Wilmington and Beaches Convention and Visitors Bureau (CVB) and president/CEO of the New Hanover County Tourism Development Authority. “We have produced our first sports marketing facilities guide, and we have enhanced the presence of sports marketing on our website.”

The stepped-up approach also includes raising the area’s visibility at the national and state levels, said Mikie Wall, the CVB’s vice president of sales and services. She has become very active with N.C. Amateur Sports, which promotes fitness and organized sports of all kinds in the state. The CVB has also joined the National Association of Sports Commissions and will be represented at the group’s major shows.

Wall is also the region’s representative with Sports NC, an organization that promotes athletic venues in the state.

“We are collectively marketing the state to sports events in the U.S. and Canada,” Wall said. “It’s a contact industry; relationships are important.”

The key to developing more sports tourism, Wall added, is making those contacts with organizers of events whose size is appropriate for the Cape Fear region.

Local relationships are important, too, she said. “We could not be marketing to sports organizations if we did not have good working relationships with local governments, especially with the parks and recreation departments. This effort is a partnership between us and the city and county. They have the facilities.”

Two homegrown competitions stand out as successful examples of what sports tourism can do for the area.

The Seaside Soccer Classic, hosted each May by Cape Fear Soccer Association, has grown to 300 teams, all but 10 of which come from outside the region. Multiply 290 teams by an average of 16 members each, and multiply that number by about four people – an average family attendance – and you have about 18,500 people potentially purchasing lodging, food and other necessities in the greater Wilmington area during the tournament weekend.

“Based on participant numbers provided by event organizers, we estimate that the Seaside Soccer Classic will generate approximately $2.13 million in direct visitor spending in New Hanover County,” Hufham said in a release promoting the 2012 tournament. “Using a conservative 2.5 multiplier, the total economic impact of this tournament will be approximately $5.3 million.”

The second major event is the PPD Beach2Battleship triathlon, which will take place Oct. 20 this year. Participation has grown, with nearly 1900 individuals swimming, biking and running in the 2011 race, and at least that many expected at this year’s race.

PPD spokesman Ned Glascock said the benefits of the triathlon are numerous, from raising awareness about the importance of clinical trials – in reference to PPD’s work – to raising funds for the Wilmington Family YMCA – the event’s beneficiary – to boosting the area’s economy.

The event, now in its fifth year, generates significant economic returns for the greater Wilmington area. Figures provided by the CVB put the Beach2Battleship’s total economic impact at an estimated $3.9 million, with a direct spending figure of about $1.5 million. Those figures are based on the predicted number of people who travel here to compete, the average size of their party and the number of days they stay in the area.
Successful as these competitions are, their organizers – and organizers of a host of other area events – would like to see their numbers grow.

The Seaside Soccer Classic could be bigger if there were more hotel rooms and soccer fields available, said Antonio Saviano, director of operations for Cape Fear Soccer.

“The past two years, we’ve had to turn away 67 teams that wanted to participate because we did not have the facilities to accommodate them,” he said.

“We always fear they won’t come back the next year. Some of the teams that do come have had to book hotel rooms in neighboring counties.”

Saviano said that it’s “frustrating” that some local hotels don’t seem as flexible as they could be in providing rooms for participants in an event that has taken place at the same time of year for the past 19 years.

In the hope that athletic and other group events will represent an even larger market in the future, the CVB is purchasing software that will provide a coordinated room reservation system to benefit groups. The product, GroupMAX, is already in use at more than 90 percent of convention and visitors bureaus in North America and connects with more than 700 hotels worldwide.

The Tourism Development Authority in its FY 2012-13 budget approved purchase of the software, and the CVB hopes to acquire the software and start training in August.

Rather than calling around to various hotels and motels to find accommodations for an event, athletes can gain access to GroupMAX from the CVB’s website, see what lodging is available from which properties and make their reservations directly.

Hotelier Kip Damrow, president of the Wilmington Area Hospitality Association, is encouraged at the prospect of a “one stop” reservations portal, and he hopes that GroupMAX will encourage group members to reserve earlier and motivate more hotels to set aside blocks of rooms for participants in large events.

“Hotels can provide deals if they know ahead of time that there will be demand for rooms, and if visitors reserve early,” he said.

“It will also be great for groups to have one central place to go for reservations.”

“We hope, of course, that people who come here for a special event will like the area so much that they will come back with their families or for their own little getaway,” Wall said.

“We want people to experience Wilmington over and over.”