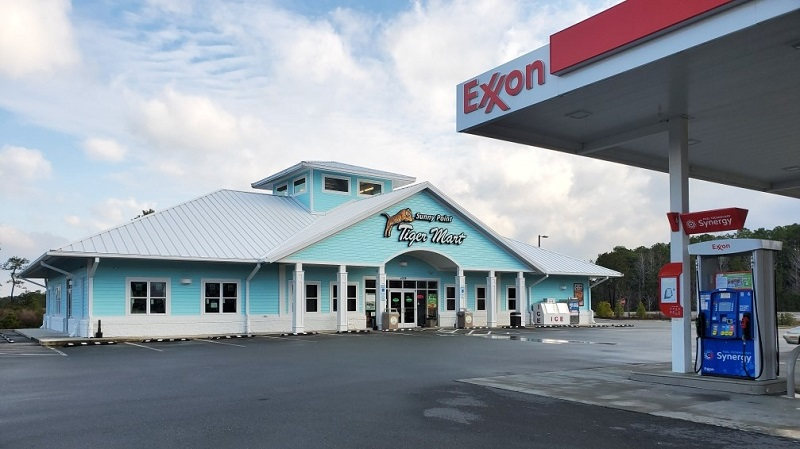 The Holt C-Store business now owns and operates the Sunny Point C-Store, which was formerly Sunny Point Tiger Mart in Southport. (Photo courtesy of Hannah Holt)
The Holt family business has purchased a gas station and convenience store  in Brunswick County, the first time the firm has added a new site to its portfolio in six years.

The store has been rebranded as the Sunny Point C-Store and will keep the Exxon Mobil Corp. brand, Holt said.

“We looked at this site probably 15 years ago with my father and my uncle who are now passed. So, it was just ironic that it came on the market when it did," Holt said. "We were in a position to grow. We had been looking at sites and putting some feelers out there. And it was ironic too that the style of the building, the architecture, fits right in our model.”

Holt did not disclose the financial details of the transaction. A Jan. 30 deed recorded in Brunswick County showed Holt Real Estate Enterprises Inc. purchasing 2.37 acres from Sunny Point Properties for a little more than $2.1 million.

Holt C-Stores are geared toward a home-like feel, and the recently purchased store models a low-country, coastal look with wood siding and a front porch, she said.

The Holt business is a multi-generational family firm that operates 11 stores and leases nine in the greater Wilmington area and Cumberland County.

The Sunny Point store is the first C-Store for Holt in the Southport area, Holt said, adding that there are now four locations throughout Brunswick County.

With the growth of Brunswick County and the Southport area, the store is in a strategic location for the firm.

“This is the first time we have ever purchased a store that has been operational,” Holt said, adding that the company typically has developed its gas station and convenience stores.