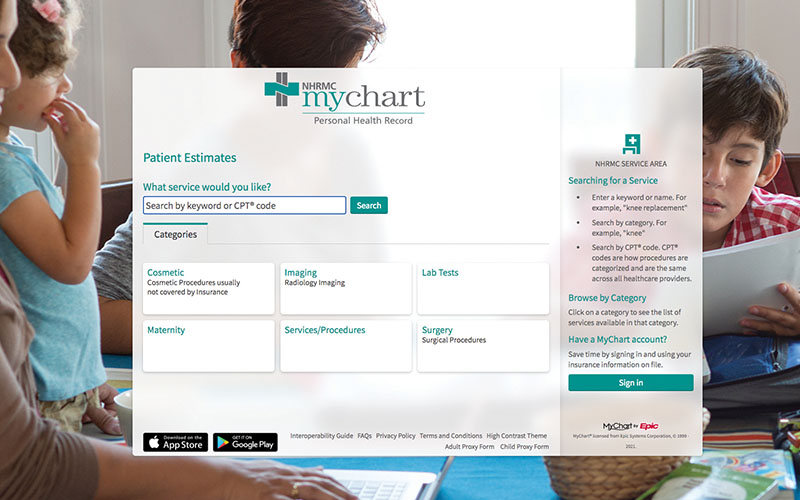 Individuals in NHRMC’s service area who want to use the price estimator should access the NHRMC website. (Photo c/o NHRMC)
On Jan. 1, hospitals across North Carolina and the rest of the country began adapting to a new federal pricing transparency rule designed to provide the public with a clearer picture of what they might end up paying for their medical care.

The rule, from the Centers for Medicare and Medicaid Services (CMS), requires all U.S. hospitals to install on their website a “comprehensive machine-readable file” containing a list of standard charges for all items and services and also to display at least 300 “shoppable” services unless the hospital offers fewer than that amount.

The rule intends to help individuals and families avoid billing surprises, better manage household budgets and spur comparative shopping among consumers. The agency told hospitals that it would monitor their websites, evaluate any complaints it received, request corrective action if needed and impose a civil penalty of $300 per day if a hospital failed to follow the new directives.

In a backstop to federal regulators, the state attorney general’s office shared an open letter with hospital administrators on June 2, asking them to provide proof that they have taken the transparency rule seriously. Hospital responses were due by June 30.

Some health care providers, including Novant Health, believe the transparency rule was well-intentioned but could prove counterproductive for consumers.

“While this rule is meant to make health care costs easier for patients to understand, some components of the rule actually make it more confusing,” said Melonie O’Connell, Novant Health’s vice president of pricing strategy, in a company podcast.

“If you used the file required by CMS to search for a common procedure, you’d find data that breaks it down by CPT code and charge by payor. But none of that information is what a patient will actually pay to receive care,” O’Connell said. In the lead-up to CMS’s adoption of its rule, the agency received “many” public comments saying that disclosure of negotiated rates reached by hospitals and third parties “could encourage price fixing and facilitate hospital collusion, causing prices to rise and thus harming consumers.”

Still, the agency said, its new rule would provide “particular benefits for consumers who we believe have a right to know the cost of hospital services before committing to them and to be able to shop for the best value care and for employers who purchase healthcare for their employees.”


In addition to posting standard charges, Novant Health chose to take advantage of a provision in the rule that allows hospitals to forgo posting hundreds of shoppable services in favor of providing customers with an online cost-estimate tool.

That web-based tool helps individuals arrive at a tentative out-of-pocket cost for the specific care they will receive. Estimates are available free to both patients and other members of the public at NovantHealth.org/ CostEstimates.

Because the Novant Health and New Hanover Regional Medical Center websites have not yet merged following Novant’s February acquisition of the Wilmington hospital, individuals in NHRMC’s service area who want to use the price estimator should access the NHRMC website at nhrmc.org/patients/insurance-billing/pricing-information.

“You do not need to be an existing Novant patient to take advantage of the information offered by the tool,” a Novant Health spokesperson said.

“The online price-estimator tool is powered by a handful of different data sets, including the lists of negotiated rates with insurers for each of our facilities,” a company statement said. “It also takes into account an individual’s insurance coverage along with other factors that may impact the cost of their care like where they are during their plan year, whether or not they’ve met their deductible and what their out-of-pocket maximum is.”

FAQs posted on Novant Health’s website underscore the message that the price estimator does not provide a firm and final cost of service.

“The price estimator uses a Real Time Eligibility check using your current insurance coverage,” one entry says. “However, this information can only provide the Novant Health facility fees and does not include physician or ancillary fees – like anesthesia. The best way for patients to understand what they will pay for care is to work with their insurer and with our dedicated financial navigator team.”

Novant’s navigators are prepared to answer questions regarding use of the price estimator, how patients can work with their insurer prior to any service or procedure and what financial assistance may be available to them.


A March 22 story in The Wall Street Journal identified Novant Health as one of hundreds of hospitals that embedded code in their websites to prevent search engines from displaying the raw data found in their lengthy standard charges lists.

In its final rule, CMS does not explicitly bar hospitals from using such code, simply saying that pricing data must be “prominently displayed.”

“Our initial use of this code was to help ensure that when a consumer conducts a search to estimate their cost-of-care, they land on the more useful, accurate price-estimator tool versus the complete charge list. Unfortunately, that has been misconstrued as an attempt to hide price information from consumers. This was never the intent. As of April 2, this code has been removed from our website,” the health system said in response to an inquiry from the Business Journal.