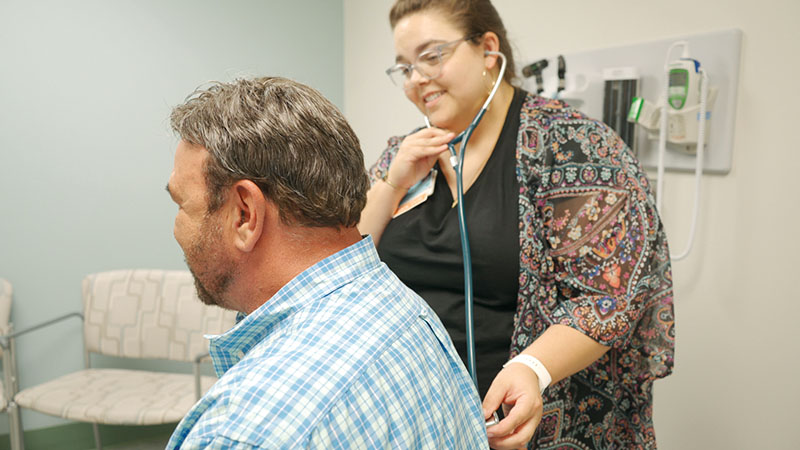 Kristin Kirkland, an NHRMC family medicine resident, sees a patient. The hospital’s residency and medical school campus programs are part of the current discussions with potential NHRMC buyers. (Photo by David Hardin, c/o NHRMC)
Graduate medical education has been one of several issues hashed out as part of the re­cent negotiations over New Hanover Regional Medical Center.

NHRMC has had a partnership with UNC for nearly 40 years on the hospital’s graduate medical educa­tion program, in which doc­tors just out of medical school see area patients in several special­ties. NHRMC also is the site of a UNC School of Medicine branch cam­pus, which has 12 third-year medical students and six fourth-year medical students.

But with NHRMC’s future owner­ship being discussed, those programs have become part of the bidding process as well.

As of press time, three health systems that have offered to buy NHRMC were in the running – Duke Health, Atrium Health and Novant Health. After recent due diligence talks, the Partnership Advisory Group (PAG) was looking to poten­tially recommend one for more nego­tiations soon. Hospital trustees and county commissioners would need to weigh in on any recommendation.

“It’s important to the physicians, but it’s also important to the overall quality of care delivered in the entire [NHRMC] system,” she said. “The nice thing is we put the investment or the funding into the graduate medical education that we provide, so it’s not that we would lose something or ask­ing someone to necessarily give more because we already have that invest­ment made to make sure we have that caliber here. And the other piece is all of them [Atrium, Novant and Duke’s proposals] have a component that is very important to us, and that’s mak­ing sure we have the availability of physicians in our region so as they’re coming out of medical school they have the opportunity to stay within the region.”

All three systems pledged to grow the existing programs if selected.

Under the proposals to provide that education component, Charlotte- based Atrium has pointed to its overall pending partnership with Wake Forest Baptist Health, and the two signed a memo of understanding specifically about the relationship for NHRMC.

Winston-Salem-based Novant Health during the recent negotiations brought UNC Health and UNC School of Medicine to the table with a letter of intent to expand UNC’s existing programs at NHRMC. One example they offered was growing the UNC School of Medicine’s Wilmington branch from 18 to 30 students by 2026; others focused on pediatric care expansions and clinical trials and research.

“We’re confident that through the investments and expertise central to this partnership, Wilmington will become a first-choice destination for students, researchers, patients and partners for the future of health care,” Novant Health CEO Carl Armato said.

Like the other two systems, Durham-based Duke Health also envisions creating a clinical, academic and research destination center with NHRMC as the hub.

Duke officials pointed out to PAG members that it has a long history as a medical academic center and does not need to rely on forging outside deals.

“As a result of this permanent, fully integrated platform, a strategic partnership with Duke also provides the PAG, NHRMC, and New Hanover County an accelerated timeline to effectuate the partnership with significantly lower execution risk,” Eugene Washington, chancellor of health affairs at Duke University and president and CEO of Duke University Health System, wrote in a memo to the PAG. “We eliminate any potential uncertainty resulting from reliance on third parties and involvement of state-controlled organizations.”