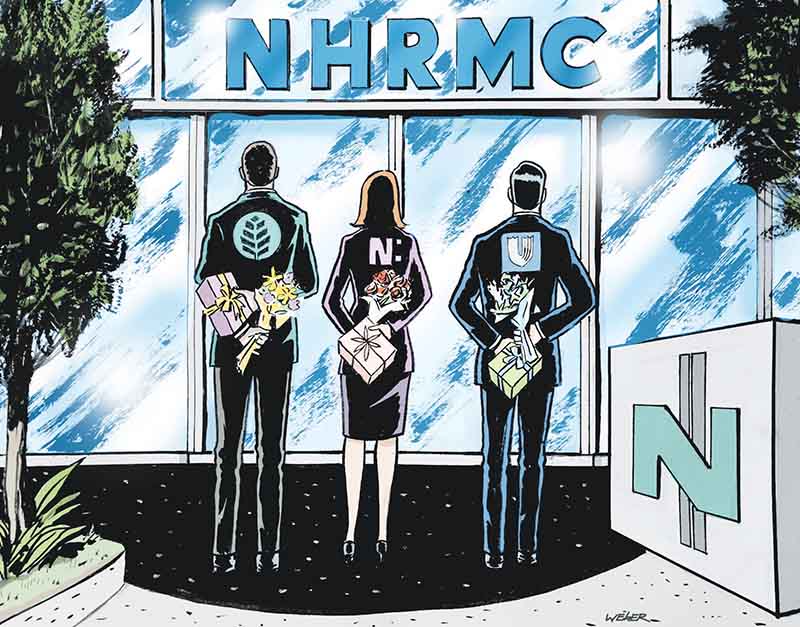 Atrium Health, Novant Health and Duke Health were the three systems local officials decided to engage in more talks with about their ideas for buying or partnering with NHRMC. (Illustration by Mark Weber)

The interviews have begun.

Of the six health systems that submitted proposals for buying or partnering with NHRMC, three moved ahead of the rest of the pack for further due diligence, with poten­tially a multi-billion deal at the end for the county-owned hospital.

Atrium Health, Duke Health and Novant Health came up as the top picks for several of the groups involved in the process.

The Partnership Advisory Group, NHRMC trustees and county com­missioners all voted unanimously at their respective meetings in recent weeks to move those proposals to the front.

The other three proposals – from HCA Healthcare, HealthSpan and UNC Health – are not technically off the table, officials said. That’s in part because a public hearing about the submissions required under state law has not been able to take place yet with the ban on large gatherings during the COVID-19 situation.

Also not off the table, according to Partnership Advisory Group lead­ers, are the scenarios of not making a deal with an outside health system by keeping NHRMC like it is now as well as restructuring its model internally to get around some of the limitations they say it has as a coun­ty-owned facility.

“Every decision we make is bal­anced against status quo, internal restructuring – every step of the way,” said Spence Broadhurst, co-chair of the Partnership Advisory Group (PAG), which is made up of 21 members. “As we move forward with any further recommendation, we will continue that analysis.”

With the recent votes, due dili­gence talks are taking place with the three health systems as well as site visits, both virtual and in-person with small groups. PAG members will ultimately recommend to county commissioners and hospital trustees what direction they think should be taken and whether to negotiate a let­ter of intent with one of the systems. Since the PAG is an advisory group, the final decisions rest with the county commissioners and hospital trustees.

PAG members have been evaluat­ing the proposals on 18 issues, from expanding and reconfiguring facil­ities to health equity programs to local control. The group’s scoring on how the health systems’ proposals did in responding to those 18 areas are not being released. But here is a closer look at some of the areas being evaluated.

Atrium Health: A long-term lease of the hospital – over 40 years be­fore it would become owner, with a pledge to spend $3.1 billion on New Hanover Regional Medical Center and the community. That includes upfront money to the county, lease payments and capital project invest­ments, including a behavioral health and addiction treatment facility.

“We make sure we’re meeting the needs of the local community, and so this lease will allow us to do that,” said Ken Haynes, greater Charlotte region president for Charlotte-based Atrium Health. “We’ve heard the community say loud and clear, ‘[We] don’t want necessarily sell the hos­pital or be in a position where we go forward with a partner that may not work.’”

Duke Health: Said it is open to discussing different partnership models; In the case of a purchase it proposed to either pay $500 million and let New Hanover County keep NHRMC’s net cash – estimated at $440.5 million before the COVID-19 pandemic’s financial strain – as well as fund the hospital’s $1.9 billion 12-year capital plan. Or, alternative­ly, it proposed an acquisition offer of $1.35-$1.4 billion for an all-cash closing, with the county still keeping the net cash but the spending com­mitment for capital projects being $400 million for the five years after the deal closes.

The first option “is a capital commitment upfront with a long-term funding of a capital plan as we understood it from the New Hanover [Regional Medical Center] leadership,” said William Fulker­son, Durham-based Duke Univer­sity Health System’s executive vice president.

“That creates a certain amount of money that goes to the county short term, but it maintains a long-term commitment on the part of the health system to achieve that vision," said Fulkerson, a physician and Duke University School of Medicine professor. "The destination medical center is going to require investment, is going to require capital; it’s going to require more technology. And that proposal recognizes that and also recognizes the plan that’s been developed by the leadership.”

Note: The plan Fulkerson referred to is NHRMC’s long-term strategic plan the health systems were asked about commitments to funding for the routine maintenance needs and capital projects. That strategic plan has not been made public for com­petitive reasons, and officials said the responding health systems accessed high-level versions of it.

Novant Health: Also said it is open to various models besides ac­quisition; proposed up to $2 billion in upfront cash proceeds to New Ha­nover County for buying the hospi­tal and $50 million to the NHRMC Foundation, irrespective of the structure. It also pledged to fund the capital needs in NHRMC’s strategic plan under an acquisition to $3.1 billion or a significant percentage under another type of deal.

“We feel there is the potential care … for the coastal community with New Hanover Regional Medical Center as a flagship and [Novant Health] Brunswick [Medical Center] – they’re in collaboration and work­ing alongside,” said Pam Oliver, executive vice president of Win­ston-Salem-based Novant Health.

“It would be similar to what we have currently in our Charlotte market with a flagship hospital and multiple other facilities that are driving care more locally and in the area," added Oliver, a physician who is also president of Novant Health's medical group 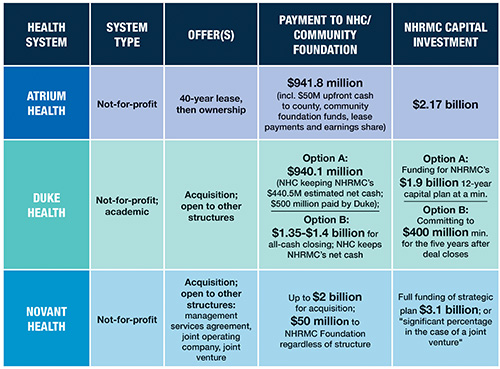 Atrium Health: Atrium pointed out that since 2009 it has managed NHRMC’s physician practices and employs most of the providers in the group, which has grown from 23 physicians in 2009 to 207 now in 39 locations. In its proposal, Atri­um said it would continue to grow the network and address urgent care and convenient care focuses. “We also will focus on developing larger/multi-specialty medical office buildings … that can accommodate multiple practices in one location,” the proposal stated. “Finally, we will expand our established virtual prima­ry care platform to include NHRMC and its entire service area,” which covers seven counties in the region.

Duke Health: Duke’s system al­ready has been implementing its own ambulatory and network expansion plan, with nearly 600 additional pro­viders and about 20 new sites. “This commitment to growth will extend to NHRMC, supported by Duke’s fi­nancial commitment and alleviating NHRMC’s limitation to fund growth outside New Hanover County,” stat­ed the proposal, which describes the potential for NHRMC as “regional destination medical center.”

Note: One of the limitations hospital officials have pointed to with NHRMC’s current structure is that it cannot use bond financing to build outside of the county.

Novant Health: Novant also said it has been investing heavily in its ambulatory footprint, including outpatient surgery centers, imag­ing centers and urgent and express care facilities. “We have reviewed [NHRMC’s] strategic master plan and are aligned in terms of the em­phasis on multifaceted ambulatory growth which includes expansion of the primary care network, expansion of the Scotts Hill Medical Campus, development of freestanding emer­gency departments and other initia­tives in the near term and beyond,” Novant’s proposal stated.

Note: NHRMC is the region’s largest employer with about 7,500 workers.

Atrium Health: Last year, Atrium spent over $19 million to increase wages for more than 15,000 nurses and nursing support staff. (NHRMC last year also spent nearly $12 mil­lion in market adjustments for more than 4,100 employees and also raised its minimum pay threshold to $12.50 an hour.) “In keeping with our track record of maintaining and growing the local employment base when we partner with a local provider, Atrium Health will maintain the current NHRMC employment base and over time grow the enterprise and thus grow local employment,” its propos­al stated.

Novant Health: Novant said that under a partnership there would be no changes to employment levels without approval from the NHRMC board and that the hospital’s senior leadership team would remain in place, “with increased responsibility for an expanded regional network including Novant Health Brunswick Medical Center.” Additionally, there would be an increase in jobs in the county “by establishing a new shared services center and basing a corpo­rate department in Wilmington,” the proposal stated.

“For all of our partnerships, [we] leverage what it is from a shared services perspective that we can do to drive value and decrease the over­head and the cost that takes away from what we can do at the clinical area,” Oliver said. “If we can de­crease corporate overhead, decrease expenses and instead put that into patient care, then that optimizes the benefit in the community.”

June 4 and 18: The Partner­ship Advisory Group continues to meet every other week. The virtual meetings are open to the public to listen through a phone line or online through Webex. Meeting access and agenda details are listed on nhrmcfu­ture.org under the PAG tab.

Upcoming meetings are slated to focus on reviewing the initial site visit findings, evaluating the part­nership options in comparison to status quo and internal restructuring options, and discussing the finalists’ presentations.

Portions of the meeting might be held in closed session.

June 15: PAG leaders are slated to give an update to county commis­sioners on the progress of the due diligence and letters of intent with the three organizations.

Reader ques­tions can be submitted during the livestreamed discussion, 8-9:30 a.m., or emailed ahead of time to [email protected]. Info: Wilming­tonPowerBreakfast.com

June 22: New Hanover County commissioners hold a public hear­ing on all six proposals. Details on time and place have not yet been announced.

July, possibly: If the PAG sticks to its schedule, members are looking to vote in July on their recommenda­tion for whether to keep the hospital as is, restructure or their top pick for an outside partner during its July meetings.

The proposal documents are online at nhrmcfuture.org/submit­ted-proposals.
To submit opinions to the PAG, email [email protected].