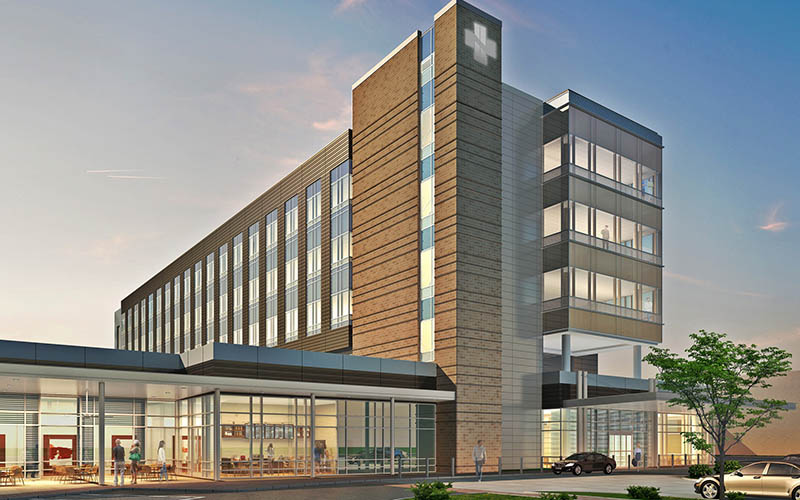 A rendering shows the plans for the new patient tower under construction at NHRMC’s main campus. (Rendering c/o NHRMC)
Even though New Hanover Regional Medical Center’s future ownership status remains up in the air, the health system has not pulled back on its facilities plans.

Hospital officials recently said they intend to turn a patient tower now under construction into a heart and vascular center when it opens – moving other pieces around to accommodate the orthopedic services originally planned for the new building.

A deal to buy land at Autumn Hall for a new emergency department also closed in recent weeks.

The capital projects are being planned as officials sort through a potential change in who operates the county-owned hospital.

A 21-member advisory group is currently working on a request for proposals to send out either later this month or early next year for outside health systems to make their pitches for outright buying NHRMC or entering into some type of management deal or partnership.

While waiting for the proposals to come back, the Partnership Advisory Group also is slated to study impacts of keeping the hospital independent as a county-owned entity as well as ways to give NHRMC more flexibility if that were to happen.

In the meantime, building decisions continue to be made.

One of those is the updated plan for the $91 million patient tower being built at the hospital’s main campus on 17th Street.

That means orthopedic services would continue to be based at NHRMC’s Orthopedic Hospital on Wrightsville Avenue, an aging facility that, under the new proposal, would see its lifespan extended through upgrades until a new hospital can be built in Scotts Hill to house orthopedics and an emergency department replacing the Wrightsville Avenue location can be built at Autumn Hall, officials said.

The more than $3.5 million trans action closed in late November.

The hospital system bought the land from the Trask family, the developers of Autumn Hall, with plans to use it to build a new emergency department and possibly more. The property is located at Eastwood Road and Dungannon Boulevard.

“We’re still evaluating what other services we could provide there as well,” hospital spokesman Julian March said.

The timing of the construction of a new emergency department has not yet been determined, but now that the land is purchased, planning for the facility can continue, March said. NHRMC already provides some services in a facility at Autumn Hall that it leases from a Trask family entity.

Construction on the new patient tower started in mid-2018, and Hurricane Florence delayed the work. It is now expected to open next summer.

Changing trends were behind the shift in the tower’s use, NHRMC President and CEO John Gizdic said.

In the years since the three-story building was first envisioned to handle inpatient ortho surgeries, the procedures have changed, he said during a Partnership Advisory Group meeting.

“It’s projected in the next five years that 60% of joint surgeries will be done on an outpatient basis.”

The update started being discussed in October, as surgical services and Orthopedic Hospital leaders looked at long-term plans for the new building, said Carolyn Fisher, director of marketing for NHRMC.

Also since the tower project was first proposed, patient needs for cardiovascular and neurosciences services have increased, Fisher said.

Gizdic said that NHRMC’s strategy for its facilities is to make its main campus focused on care for higher acuity, or sicker, patients and move lower acuity care to other locations.