Physician Quality Partners, NHRMC’s accountable care organization, or ACO, saved about $5.3 million in Medicare spending among the nearly 18,800 participants in its plan.

Because it reached its requirements, the organization for the first time since forming in 2016 received money back from Centers for Medicare & Medicaid Services – shared savings of nearly $2.5 million, according to the annual performance report CMS released about the 548 ACOs that participate in the program nationwide.

But because it didn’t hit its minimum savings rate, which is calculated based on the ACO’s historical benchmark and the number of its program enrollees, Physicians Healthcare Collaborative did not get its portion of those shared savings back.

“We’re 16th-lowest overall cost in the country out of 548 ACOs [in the 2018 results], and we don’t get any benefit out of being one of the lowest already because of that minimum savings ratios,” said Wilmington Health CEO Jeff James, adding that the group missed the mark by a tenth of 1%. “That’s one of the reasons why this particular model doesn’t work for us and why we’ll be moving on to some different types of models within the next short period of time.

“We’re going to try to move into more Medicare Advantage – we have more opportunity there. We’ll still stay in the MSSP program [the Medicare Shared Savings Program of ACOs], and we think that there are some things that are coming down, maybe more beneficial changes, in the way the score’s kind of kept. Historically, those that have really low cost already struggled to drop them further.”

The shared savings is an incentive for coordinating care and improving outcomes for enrollees while attempting to find savings for CMS in its reimbursements.

Last year, according to the annual performance report, the 548 ACOs in the country generated $739.4 million in net savings for CMS for over 10 million Medicare beneficiaries.

“We are proud to show that proactively managing preventative care, making primary care more accessible and convenient, and improving care coordination for the most vulnerable patients leads to improved health and lower costs for those we serve,” NHRMC President and CEO John Gizdic said in the release.

Outside of the monetary measures, both local ACOs scored high in measures focused on patient care and accountability.

Physicians Healthcare Collaborative showed a 97.2 for average composite quality score, and Physician Quality Partners had a quality score of 95.1 – both among the highest in the nation.

Specific areas such as patients getting timely appointments to preventative care and screenings to patients’ ratings of their providers are all tracked and scored as part of being in the CMS program.

“PQP has reduced hospitalization rates by 16 percent since their highest point in 2016, and in 2018 alone, reduced hospitalizations by 10 percent and emergency room use by 5 percent,” NHRMC’s release stated. “All of these improvements keep beneficiaries healthier and happier, at home with family instead of in the hospital.”

For NHRMC and Wilmington Health, an overall change in the Medicare Shared Savings Program will affect how they participate in the future.

The federal government is moving ACOs to a system where they have to assume more risk for containing costs and hitting targets.

Until now, groups had the option to receive money back – shared savings – if they qualified and not face a penalty if they fell short.

Going forward, money will still go back to qualifying ACOs, but providers also will be on the hook for some of the losses if spending exceeded their benchmarks.

Starting in 2021, they will both be assuming that downside risk.

James said he does not expect the change to affect how Wilmington Health’s ACO is run “because we’re doing all the things that we need to do already,” he said, adding that under last year’s results the ACO would not have been subject to reimbursements even if it already was operating under the new format. 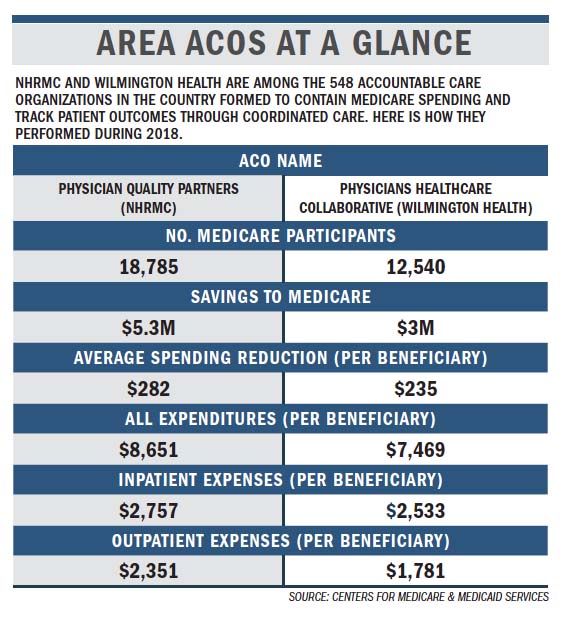