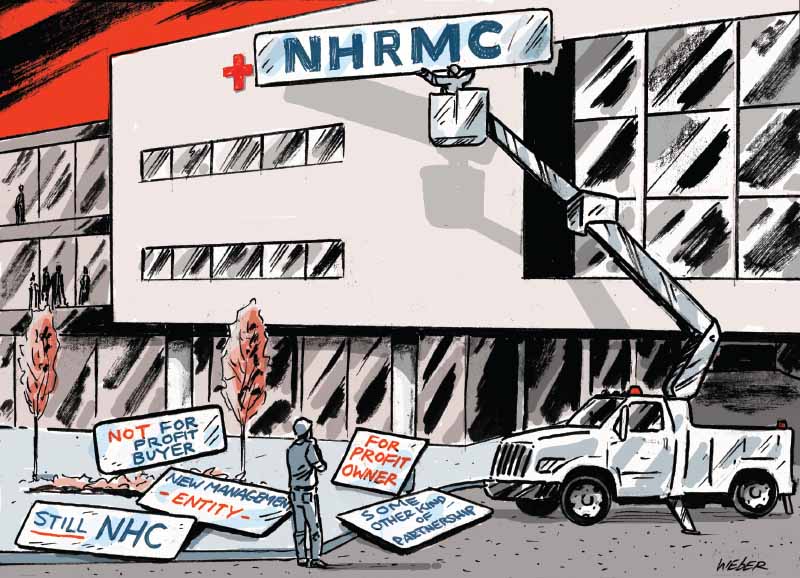 Nearly three months after New Hanover County and NHRMC officials announced that they wanted to solicit offers for the county-owned hospital – a move that surprised many in the community – they named this week the group that will dig into the details.

Since the idea first became public, arguments for considering a change include the evolving health care industry, the increasingly rare model for county-owned hospitals and the ability to potentially negotiate a better deal because of NHRMC’s strong footing.

But it has met pushback from some concerned about losing local control to an outside health system.

Officials say all options are on the table, from selling to entering into a partnership to keeping New Hanover Regional Medical Center’s role with the county as is, albeit with changes to give the health system more leeway to expand.

When county commissioners voted 3-2 on Sept. 16 to move ahead with getting bids from prospective buyers or management partners, they also authorized a new advisory group to help in the process.

That group, dubbed the Partnership Advisory Group, will help develop the request for proposals, decide at least five health systems to send it to (per state law), evaluate the proposals that come back and give their recommendations on what to do next to the New Hanover County Board of Commissioners and NHRMC Board of Trustees – both of which have final say on any deal that comes about.

The new advisory group announced Monday includes a mix of physicians picked by the medical staff (but including doctors from independent practices), hospital trustees and community members.

“The group has many different opinions,” Coudriet said. “Some, in fact, have been vocally against considering a sell. What they do have in common, however, is a desire to help choose the right path forward.”

One question that has come up about is how outlying counties will be represented in the process. NHRMC is owned by New Hanover County, but the health system is both the largest employer in the region and the main health system for residents beyond county lines.

Gizdic said the hospital’s board of trustees, which will play a significant role in the months ahead, includes voices from Pender County, where NHRMC currently manages Pender Memorial Hospital.

“There are 17 members of our board of trustees, so many of those are appointed by the county commissioners, but we have representation on our board of trustees from the New Hanover Regional medical staff, the Pender hospital medical staff, as well as Pender County,” Gizdic said. “And so, when we talk about this being a regional perspective, we do have regional representation on our board that will be taking any regional impact into account.”

The group’s first task was attending a public hearing Tuesday about the issue and the upcoming RFP. That same day – after press deadline on this issue – Wilmington’s City Council was slated to take up a resolution urging the county commissioners to hold off on the RFP.

The resolution called for more time for community discussion “including addressing the concerns of community members who are skeptical of the sale option, over the next year to consider relevant healthcare issues, healthcare funding, hospital economics, medical advances, antitrust issues, and other important topics so that the community may have a thorough appreciation of the issues and be confident that their best interest is paramount.”

Gizdic and Coudriet both said they were surprised by the resolution.

“It tells me we’re not getting word out there well enough that there is a Partnership Advisory Group that is made up of community members, that we are conducting public hearings, that we are following state statute [that governs how a public hospital can be sold or leased],” Gizdic said.


The state law calls for the first step of adopting a resolution declaring an intent to sell, which is what was proposed this summer.

That language has dogged the discussion issue since.

Gizdic and Coudriet – as well as commissioners Julia Olson-Boseman, Woody White and Pat Kusek, who voted for allowing the RFP – have since repeatedly pointed out that other options could be considered.

While there certainly will be outright offers to buy NHRMC, especially in the current climate of hospital acquisitions, other management and partnership deals could also be proposed.

In a recent example in the state, UNC REX Healthcare – itself the result of an acquisition in 2000 when Chapel Hill’s UNC Health Care bought Raleigh’s Rex Healthcare – announced late last month that it and Smithfield’s Johnston Health had agreed to combine operations through a joint operating agreement.

Johnston Health several years ago entered into a joint venture with UNC Health Care to expand care, including opening a 50-bed community hospital in Clayton and recruiting new physicians and other providers.

Other deals in North Carolina, however, have included purchases.

Earlier this year, for-profit, Nashville- based HCA Healthcare closed on a $1.5 billion purchase of not-forprofit Mission Health in Asheville.

While earlier hospital mergers and acquisitions were driven by Affordable Care Act changes and then divesting when mergers didn’t integrate well, many of the deals happening now are because of health systems looking at what’s ahead, said Bret Schroeder, a health care expert with PA Consulting Group.

“And so the question then becomes for perhaps an organization like New Hanover [Regional] – financially sound now but sitting there with 800 beds or so, probably debt service on 800 beds – if we move to more of an outpatient world and a fee for outcome, does that decrease the number of beds needed in the future?” Schroeder said.

“One thing I did notice in the financials for New Hanover was while revenues have grown, costs have also grown,” he said. “But costs have actually grown at a faster rate than revenue. So that leads you to think that they can’t scale cost-effectively.”

Scaling efficiencies is one argument for turning to a larger health system. Better negotiating power with insurance companies for reimbursements is another.


What is System Co?


And yet another option is retaining the current county ownership but looking at ways to give NHRMC more flexibility.

That was one point county commissioners Chairman Jonathan Barfield Jr. made Sept. 16 when he and Commissioner Rob Zapple voted against pursuing the RFP now and slowing down the process.

Barfield said officials were looking at ways to give the hospital the ability to address future issues.

“We had a program called System Co in place, and System Co would fundamentally change the lease that we have at the hospital to give them the ability to borrow money outside of the county to build,” Barfield said during the meeting.

“Our current lease prohibits them from building or borrowing money, financing to build outside of the county. So to prohibit another entity from coming in and taking the low-hanging fruit, we had this document prepared,” he continued. “Somehow that document got pushed to the side, and we are having this conversation now. I believe we need to revisit System Co.”

Coudriet said last week that they did the research work on System Co, or changes to the existing ownership rules, in the same way they did research on other options before leading up to the announcement to explore new ownership opportunities.

“System Co was where the hospital for years – trustee and administration – have identified issues, obstacles that it faces because of the current organizational structure, the fact that it’s a county hospital and all of the associated business units and functions of the hospital flow from a hospital and not some other different kind of parent corporation,” Coudriet said.

As for bonds, while the hospital pays the debt, the bonds are issued through the county.

“And we’re certainly not in a position to issue debt in another community,” Coudriet said. “And all of the revenues that are pledged to pay that debt are revenues of the hospital, which is county-owned, so it’s a real complicated mix … So there are a number of things that we looked at with System Co that begin to nibble around the edges, but fundamentally, it doesn’t really solve as effectively for the headwinds because System Co would perhaps allow the hospital on its own to issue debt outside of the county. But it doesn’t solve for the fact that they don’t really have additional access to debt capacity.”

The new Partnership Advisory Group is expected to both evaluate outside proposals that come in but also consider the potential for NHRMC to remain owned by the county. If that becomes one of the group’s recommendations, it would look at changes that would better support a county-owned model.