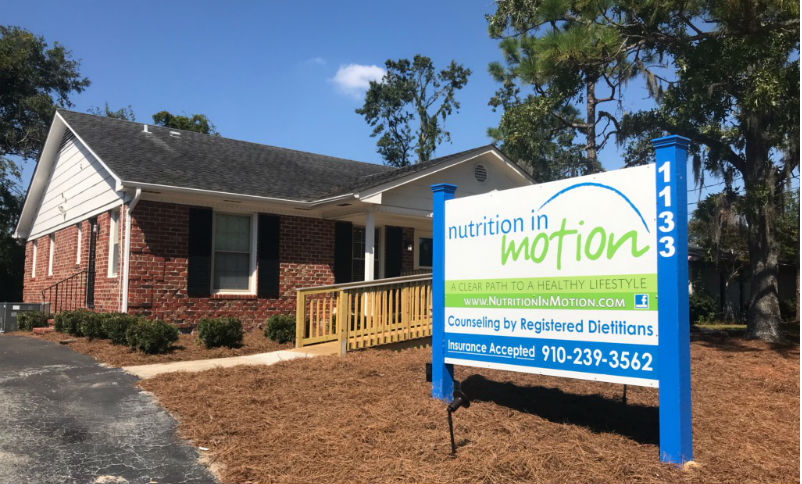 “We've doubled our counseling rooms, going from three to six,” she said. “We also have a lot more space for front desk staff because we're growing here and also because we've expanded in Jacksonville and we are doing all of the scheduling and office work for Jacksonville out of Wilmington.”

Kennedy said she wanted to stay on Medical Center Drive because it’s a central location for health care-based businesses.

“It’s easier for the patients when they can keep all of their healthcare needs as close to their primary physician as possible,” she said. “We have a lot of referring providers in this area. So, while there are great doctors located all over Wilmington, this is the little mecca for it.”

The services at Nutrition in Motion, including nutrition education and counseling, are covered by insurance such as Medicare, Blue Cross Blue Shield and Humana, among others, she said.

Kennedy was motivated to open a Nutrition in Motion location in Jacksonville when TRICARE Insurance, a healthcare program of the U.S. Department of Defense Military Health System, started covering dietitians.

“We've always known that there was a need there,” Kennedy said about Jacksonville. “People we're driving here to see us. TRICARE decided they’re going to start paying for dietitians to see all of our military and so that inspired us to want to go up there and help people who are on non-active duties.”

Kennedy, who has been a dietitian for 20 years, started the company in 2010.

“The first 10 years being a dietitian, I worked in many hospitals,” she said. “I taught at three different universities and the thing that was most rewarding to me was doing outpatient counseling because you actually see the outcome; you get to see people change.”

“I’m going to Live Oak Bank tomorrow to do a presentation for a lunch and learn event for their employees,” she said. “I go on-site to various places around town and do one-on-one counseling.”

While some clients at Nutrition in Motion are referred by their physicians, people don’t have to wait until they have a medical condition or are overweight or underweight to seek counseling.

“We are seeing a lot more clients and a referral from a physician is not necessary,” Kennedy said. “I think that people are just getting more in tune to the fact that what they eat is going to dictate the future of their health and so they're wanting to be proactive rather than reactive. Word of mouth has been great. I can say that our schedules are packed every day. We’re a month out in scheduling.”