At public forums Monday and Tuesday, New Hanover County Manager Chris Coudriet and NHRMC President and CEO John Gizdic laid out their cases for moving ahead with exploring a potential sale of the county-owned hospital.

“Sometimes to preserve what you love the most you have to consider change, and that’s what we’re talking about, is considering our options for ensuring this organization continues to be like it is going forward,” Gizdic said to Tuesday morning’s audience of about 150 people at the county’s senior center auditorium. Another couple hundred attended Monday evening’s forum at the Northeast Library branch.

Retaining local control, not diminishing the current level of care and wanting more time to discuss the issue were comments made repeatedly in the two meetings from those in the audience critical of the idea. 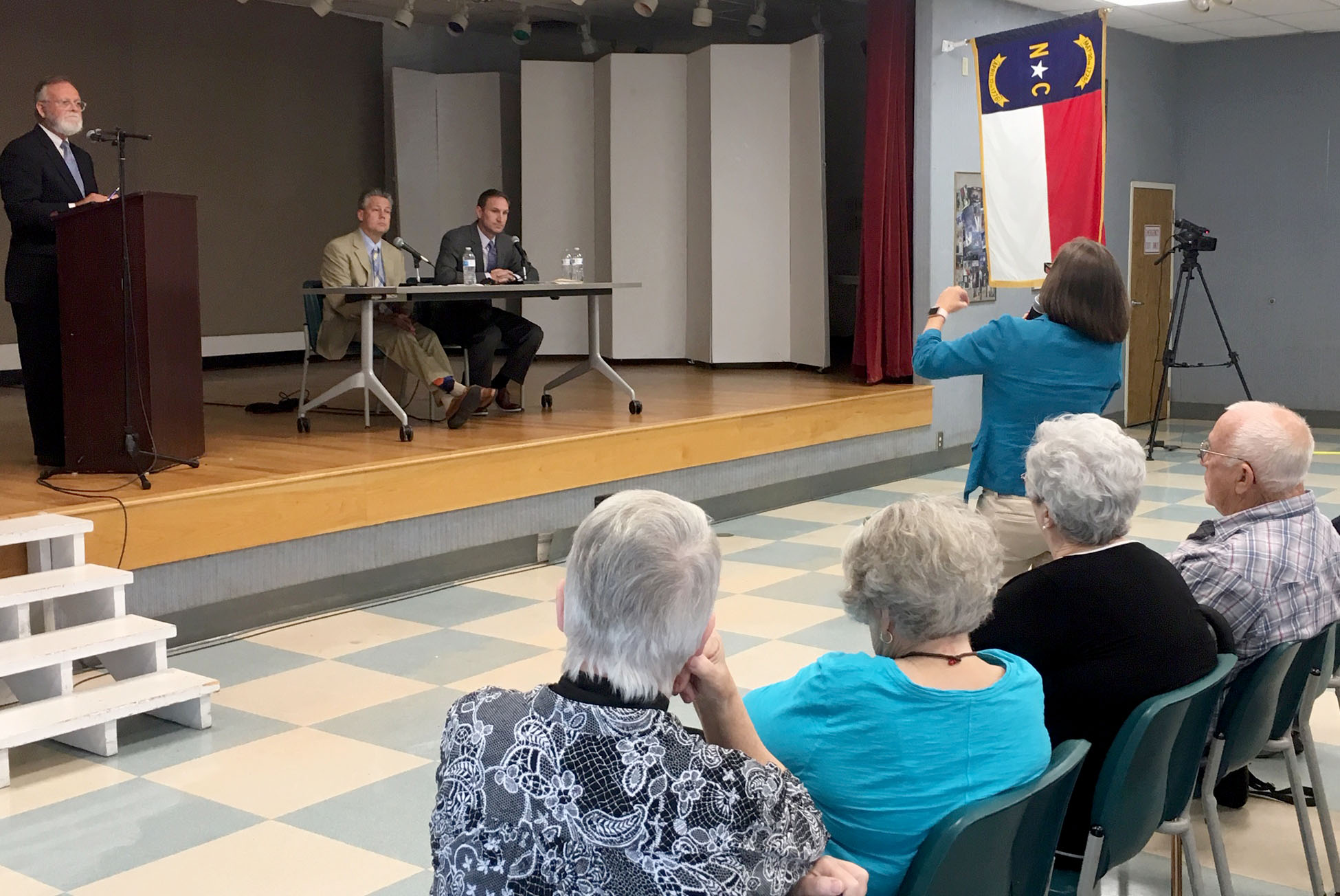 The New Hanover County Board of Commissioners is scheduled to vote Sept. 3 on a resolution to explore a potential sale. Three of the board’s five commissioners have said they support that resolution, which does not trigger a sale commitment but instead clears the way for a request for proposals to go out to the marketplace to see what comes back.

A public hearing would be required before that RFP goes out, Coudriet said, and Gizdic said that a partnership advisory group that includes several physicians would work on the RFP. In the process, which is addressed in state law, any potential buyers’ proposals would be the subject of a public hearing, reviewed and used by commissioners to decide whether to start negotiations with one or more interested health systems, Coudriet said.

While the full process, if it moves forward, could take a while and include future public hearings and votes, the initial non-binding resolution vote will come six weeks after many in the community first heard that potentially selling the hospital was on the table.

For some in the forum audiences, that was too soon.

“There has been a request by several of the physicians to give up to a three-month allowance … prevent the vote for three months so that they can get their heads wrapped around everything that’s going on,” said Amy Boles, referring to a vote from the majority of NHRMC Medical Staff who attended a recent meeting in deciding to request the commissioners hold off on the Sept. 3 resolution. “So my question is, why the rush?”

Coudriet responded that he did not think the process has been rushed.

“That vote,” he said about the upcoming decision, “is not to actually negotiate a proposal. It’s to begin what is a very deliberative and open process.”

In his opening remarks at both meetings, Gizdic pointed to several industry shifts as examples of changes coming that could impact the currently financially stable health system, which does not receive tax subsidies from the local government for operations.

Some of those issues he pointed to were state-level changes, including the upcoming move of the state’s Medicaid program to a managed care system, which is slated to be implemented in Southeastern North Carolina next year. Gizdic said that would equal a $20 million a year drop from NHRMC’s current levels of reimbursements.

Other potential revenue hits could come from a push to get rid of a federal program that allows certain discounted medicines for hospitals that treat a disproportionate share of Medicaid and uninsured patients. If that were to happen, that could come to an additional $30 million loss, Gizdic said.

And, he continued, if the state were to follow through on discussions about eliminating a sales tax exemption for not-for-profit, large health systems, that would total another $12 million a year NHRMC would be expected to pay.

“Those three changes alone are over $50 million. That would essentially eliminate all of our bottom line,” Gizdic said about the hospital, which cleared nearly $64.2 million from operations during its 2018 fiscal year.

“There have always been challenges and headwinds in health care, and we have faced those throughout our 52 years,” Gizdic said. “But those headwinds continue to get stronger, and there are more of them.”

“Any large enough to pay the amount of money that it would probably take to consummate a merger or acquisition is facing those same headwinds, particularly pressure on Medicare and Medicaid reimbursement rates. Additionally they would have to recoup their investment somehow,” he said. “So I’m not sure how you can promise the community that any deal, whether with a for-profit or a not-for-profit entity, again big enough to write a check for $500 million, $700 million or a billion, is going to be able to recoup its investment without having any impact whatsoever [on service levels and pricing]. The economics make that impossible.”

Gizdic responded by pointing to the argument of scale, adding that all organizations in the health care industry are facing similar challenges in the future.

“The analogy I would use is when the seas are rough, would you rather be in a dinghy or a ship?” he said. “And that ship is going to give us access to resources, access to scale, access to capital we may or may not get our own. Again, as Chris and I have said, selling may not be the only option in looking at various ways to access those different resources as we move forward.”

There are other public events about the issue ahead of the Sept. 3 vote.
Greater Wilmington Business Journal’s Power Breakfast
“A Healthy Sale?”
With John Gizdic and Chris Coudriet, with audience questions
Aug. 26, 7:30-9:45 a.m.
Wilmington Convention Center
Click here for info and tickets.